Spören , along with Prussendorf, which belongs to the municipality, is one of the 18 places that together make up the town of Zörbig . It is located in the south of Saxony-Anhalt between Bitterfeld and Köthen and has about 601 (2015) inhabitants. In 2001 Helmut Kretschmer was elected mayor.

There is a noticeable hill next to the church, popularly known as the "mountain". Various claims have been made that it is a megalithic grave. Archaeologists today agree that it is a so-called »moth«, an artificially raised hill, built around 1100 on which a noble's defense tower was located. The complex was part of the village fortifications, which also included ponds, ditches and swamps. The hill is from April 1, 1961, listed building .

The first documented mention of Spören comes from the year 1156. A development of the place name can be proven from traces to spurs , spurs and spars up to the present day Spören. Prussendorf, bordering on the northwest of Spören, is mentioned for the first time in a document from 1209. Both places belonged to the Zörbig Electoral Office until 1815 . The decisions of the Congress of Vienna they came to Prussia and were in 1816 the district Bitterfeld in the administrative district of Merseburg of Saxony Province allocated to which they belonged to the 1944th

On July 1, 1950, the previously independent municipality of Prussendorf was incorporated.

In Prussendorf, at the instigation of the director of the "Institute for Horticulture Dresden-Pillnitz of the German Academy of Agricultural Sciences" Gerhard Friedrich, an experimental farm was founded, which during the GDR's existence developed into a central point for fruit growers and scientists from all over Eastern Europe . 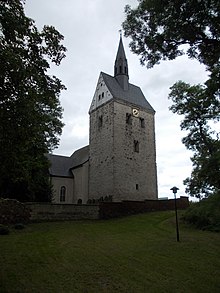 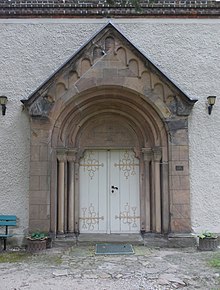 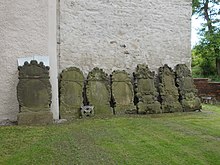 Old gravestones at the village church in Spören

Mausoleum of the Jordan landowners

The Romanesque church, built around 1170 , has remained unchanged in its floor plan since then. It was rebuilt, renovated and refurbished several times, most recently in 2001 and 2002. In the center of the church is a well-preserved winged altar made by the Leipzig master Heinrich Beyer from 1489 . Following the zeitgeist of historicism , this altar was replaced in 1879 by a high altar created by wood sculptor Gustav Kuntzsch , Wernigerode . The winged altar, which had been hung in the anteroom of the church, returned to its original place in 1966. Only the crucifixion group ( crucifix , Maria and Johannes ) remains of the high altar ; it is located in the cemetery chapel (which is no longer used today) , the former mausoleum of the Jordan family. The church has an organ with 16 stops on two manuals , built in 1904 as Opus 262 by the Wilhelm Rühlmann company .

Mausoleum of the Jordan landowners

The mausoleum ( hereditary burial ) designed by the architect Heinrich Straumer for the Jordan family, was erected around 1914 in the Spörener churchyard.

The state stud of Saxony-Anhalt is located in the Prussendorf district .