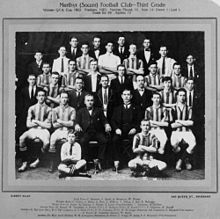 A soccer club , soccer club , or soccer club is a sports association that sets up club teams for soccer . The principles for sports clubs also apply to football clubs: non-profit status , sporting fairness and the recognition of the rules of sport . In professional football , however, clubs often no longer play, but corporations , i. H. the football departments of the respective sports clubs that are outsourced to corporations.

The name of a football club is mostly made up of an abbreviation (e.g. FC ), a relic of the name (e.g. Fortuna ) and the place name or the name of the district in which the club is located. In reporting, it is also common for a city name to be used as a synonym for the football club (e.g. Stuttgart for VfB Stuttgart or Hamburg for Hamburger SV ).

Football clubs are usually organized in associations and compete in sports competitions for different age groups in leagues and cup series.

Football clubs in the GDR