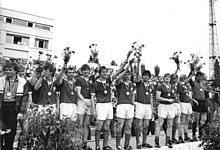 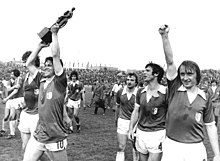 Record FDGB Cup winner 1. FC Magdeburg in their fifth title win (1978). In the picture Jürgen Sparwasser with the trophy, on the right Detlef Raugust , Wolfgang Seguin and Joachim Streich .

A soccer club was a specially promoted, competitive sports-oriented club in GDR soccer . The ten soccer clubs of the GDR existed in this form from 1965/66 to 1990, and SG Dynamo Dresden, which was funded like a soccer club from the late 1960s, had also existed since 1953 .

Since the introduction of the sports clubs from the mid-1950s, their soccer sections have largely dominated the operations of the major soccer league . As a result of a decision by DTSB officials , football was given a special position in the competitive sports system of the GDR at the end of 1965 with the aim of further raising the level of the league and promoting top-class football in a more targeted manner. The soccer sections were separated from all sports clubs. Ten sections were designated as football clubs and thus received the status of an independent sports club in December 1965 and January 1966, respectively. With the exception of FC Carl Zeiss Jena ( Gera district ), all were located in district capitals or in East Berlin . A maximum of one soccer club per district was planned , with Berlin being an exception. In addition to the two clubs, BFC Dynamo and FC Vorwärts, which are controlled by the Ministry for State Security and the National People's Army, a third football club was created there as a civilian counterweight with 1. FC Union. This is remarkable insofar as only the strongest football sections were actually eligible for a football club formation, but Union forerunner TSC Berlin was only a second division at the time . Six other, partly higher-class sports clubs, on the other hand, lost their soccer sections, which were affiliated to company sports associations.

SG Dynamo Dresden occupies a special position. According to its name, it was never a football club during the SED dictatorship, as Stasi chief Erich Mielke saw such a construct as competition to the BFC Dynamo he preferred, but rather a sports community. Founded on April 12, 1953, it received special support as a football focus center of the Dynamo sports association for the Dresden district , established in the late 1960s, similar to that of the football clubs . Another specialty is FC Vorwärts. This soccer club, supported by the Vorwärts Army Sports Association , played from 1966 to 1971 as FC Vorwärts Berlin in East Berlin . Then, in connection with the move of ASK Vorwärts Berlin to Frankfurt (Oder), it was also “delegated” to this district capital and from then on went under the name FC Vorwärts Frankfurt (Oder) .

With the implementation of the DFV football resolution of 1970 , the promotion of the sports clubs and the football clubs as the sole performance centers led to a politically wanted two -tier society in the football league : the clubs, which were heavily funded and working under largely professional conditions, dominated Game operations in every way. The best company sports associations (BSG), on the other hand, only served as a reservoir of talented young players who were later "delegated" to the big football clubs. The player transfers were not made with money according to the procedure typical in the GDR, but instead were carried out in the course of the concentration of performance and with necessity for reasons of sport policy. After 1954, only one BSG team became East German soccer champions: in 1964 the BSG Chemie Leipzig , which, however, had been made up of players from two disbanded sports clubs the previous year. From 1968 to 1991, however, football clubs were always in the top three places in the league table. A comparable situation existed in the handball league of the GDR , where the last five sports clubs dominated the championship against the BSGen.

In the course of the turnaround , the football clubs achieved the status of registered associations in 1990 . Five of them - Union, Erfurt, Jena, Magdeburg and Rostock - were not renamed after reunification. The other five football clubs gave themselves new names. The HFC deleted the name "chemistry", the BFC Dynamo became FC Berlin and forward Frankfurt was called from 1991 first FC Victoria 91 Frankfurt (Oder) and from 1992 Frankfurt FC Viktoria 91. In the case of the FCK, the new name was not least because of the Renaming of the city of Karl-Marx-Stadt in Chemnitz necessary, which is why the club then called itself Chemnitzer FC. The 1. FC Lok Leipzig was in 1991 in the overall club VfB Leipzig . FC Berlin later resumed its previous name, BFC Dynamo; the same applies to SG Dynamo Dresden, which has since been renamed 1. FC Dynamo Dresden. Since 2003 there has been a new 1. FC Lokomotive Leipzig . Six of the eleven former football performance centers - Union, Dresden, Jena, Leipzig, Magdeburg and Rostock - also still or again have their club logos from the GDR era.