Eberhard Vogel (born April 8, 1943 in Altenhain , district of Frankenberg / Sa. ) Is a former German soccer player and soccer coach. With 440 appearances for SC / FC Karl-Marx-Stadt and FC Carl Zeiss Jena , he is the record player in the GDR league . He completed 74 games with the GDR national soccer team .

Vogel grew up in the small town of Niederwiesa near today's Chemnitz . First he played in the Niederwiesa school team, but then joined the SG Niederwiesa. From there he was delegated in 1959 as a junior player to the third division club SC Motor Karl-Marx-Stadt, which later became FC Karl-Marx-Stadt . After completing an apprenticeship as a locksmith, the 1.79 m tall striker played his first games in the men's team in the 1961/62 season, which now played in the second-rate GDR league , and with which he went to the GDR at the end of the season - Upper league promotion. Vogel made his debut in the major league on the first match day, August 18, 1962, in the match between SC Motor and SC Aufbau Magdeburg. After the 0: 1 deficit, Vogel made it 1: 1 with his first league goal. With 25 of 26 played point games, he immediately belonged to the tribe of Karl Marx townsfolk. In 1967 Vogel was GDR champion with the FCK, to which he had contributed with 24 out of 26 possible point games and five goals. At the same time, the trained locksmith also completed a distance learning course at the Leipzig Sport University DHfK .

When the Karl-Marx-Städter were relegated from the league in 1970, Vogel, who was now a national player, switched to the current GDR champions FC Carl Zeiss Jena . In Jena, too, he was an immediate regular player and in his first season he was Jena’s best shooter with eleven goals. He succeeded in doing this in five further seasons by 1980. In 1972, 1974 and 1980 he won the FDGB Cup with Jena , played 47 games in the European Cup and in 1981 was in the final of the European Cup Winners' Cup against Dynamo Tbilissi (1: 2). Vogel played his last league season as a 39-year-old 1981/82 and was used again in 14 point games. For the last time he was on May 30, 1982, the 26th matchday, in the match between FC Carl Zeiss and HFC Chemie (1: 2) for 75 minutes in his regular position on the left wing in the league team.

With 440 appearances, Eberhard Vogel is the player with the most GDR league games. He scored a total of 188 goals, 70 goals in 198 games for FC Karl-Marx-Stadt, 118 goals in 242 games for FC Carl Zeiss Jena. In the list of the most successful goal scorers in the GDR Oberliga, he is second after Joachim Streich with 229 goals. In 1969 Vogel was voted footballer of the year as an FCK player . 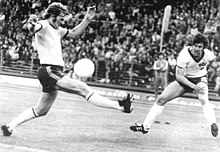 He played his first game in the senior national team at the age of 19 as a left winger on December 16, 1962 in Conakry against Guinea (3-2). However, since this position was occupied by the veteran Roland Ducke, Vogel did not return to an international match until 14 months later. From 1966 he had finally prevailed as the left winger of the national team. He played three games at the 1974 World Cup , but missed the memorable 1-0 win over the DFB selection due to an injury . On April 21, 1976 he played in Cottbus against Algeria (5-0) for the last time in the GDR selection. Vogel played a total of 74 games for the senior national team and hit the opposing goal 25 times.

With the Olympic selection , for which played 24 missions between 1964 and 1976, he won the bronze medal at the 1964 Olympic Games in Tokyo and 1972 in the Federal Republic of Germany. His goal was legendary in the playoff of the Olympic qualification on June 28, 1964 in Warsaw in the 4-1 win over the Soviet Union , when he converted a corner kick from the left with the left outside foot in the 81st minute.

During his time as an active soccer player, Eberhard Vogel had acquired the sports teacher diploma and was thus also qualified as a soccer coach. After completing his footballing career, the GDR Football Association took over Vogel as a junior coach. In this role Vogel was able to achieve his greatest successes as a coach. With the GDR juniors he became European champion in 1986, with the U-20 national team he was third in the world championship and the U-16 team was runner-up in 1989 under Vogel. From 1989 to 1990 Vogel was assistant coach for the senior national team under Eduard Geyer .

After the dissolution of the GDR football association, Vogel became a club coach. After working as an amateur coach at Borussia Mönchengladbach (1990/91) and 1. FC Köln (1991/92), on July 1, 1992, he took over the coaching position at the second division side Hannover 96 , which had reached fifth place in the northern season last season. Under Vogel's leadership, 96 moved just above the relegation places during the 1992/93 season and finally ended up ninth. When the team had dropped back to 13th place in the table on the 15th matchday of the following season, Vogel was released on November 6, 1993.

Vogel then returned to his old club, FC Carl Zeiss Jena, which was now playing in the then third-class regional league. He took over the team on the 5th day of the 1994/95 season and led them to the 2nd Bundesliga at the end of the season. There his team reached the 6th place as a newcomer. When Jena was in acute danger of relegation in the spring of 1997, Vogel was released again in May 1997, five match days before the end of the season.

This was followed by a year-long interlude as coach of the fifth division VfB Pößneck (1996/97). Then Vogel took over the only foreign activity of his coaching career as national coach of Togo . Here, too, he only stayed for one year from 1997 to 1998, only to then train the lower-class teams of FSV Hoyerswerda (Oberliga), 1. FC Magdeburg (Oberliga) and Dresdner SC (Regionalliga) for only one year until 2003 . In the 2000/01 DFB Cup he caused a sensation with 1. FC Magdeburg when his team won one after the other against the Bundesliga clubs 1. FC Köln , FC Bayern Munich and Karlsruher SC and only narrowly with 0 in the quarter-finals at eventual winners FC Schalke 04 : 1 failed. His last coaching station was VfB Sangerhausen , where he was active in the Saxony-Anhalt Association League (5th division) during the 2004/05 and 2005/06 seasons.

Since February 2010 Vogel has been strengthening the scouting area at FC Carl Zeiss Jena, where he will take on tasks in player monitoring and talent scouting.

Eberhard Vogel is married to the GDR champion from 1968 over 100 meters Angela Höhme . They have two sons, Tino and André. Son Tino Vogel was among other things coach at Chemnitzer FC and RB Leipzig . At the age of 60, Eberhard Vogel was still hunting for goals with the traditional team of FC Carl Zeiss Jena. In 1996 he was awarded the gold pin of honor by FC Carl Zeiss Jena.