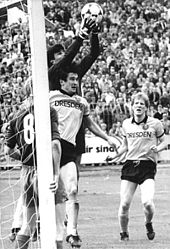 René Müller catches a ball in the league game against Dynamo Dresden pressed by Hans-Uwe Pilz . In the background Matthias Sammer .

The first club in Müller's career was the BSG activist Markkleeberg from 1965 to 1970 . After his delegation to the soccer performance center of 1. FC Lokomotive Leipzig , he became champion in the junior league with the junior team in 1976 . Also in 1966 he was in the goal of the league team for the first time . Initially as a substitute goalkeeper behind Werner Friese , René Müller prevailed against Siegfried Stötzner within the club after his resignation in 1979 . He had played a total of 264 league games for Lok by 1990. The long-time team captain was always one of the pillars of the team. In 1986 and 1987 he won the FDGB Cup with Lok .

René Müller played the first of his 46 senior international matches for the GDR national team in February 1984 in a 3-1 win in Athens against the Greek team . He played nine World Cup and eight European Championship qualifiers and 29 friendlies for the GDR. In the game against Romania in March 1988 he underwent an own goal , like all GDR select goalkeepers in front of the opposing goal he was without his own goal. For the last time he stood between the posts for the GDR in 1989. On April 12, Manfred Zapf's team lost 2-0 in a World Cup qualifier against Turkey in Magdeburg .

Müller stood between the posts in 39 European Cup games for 1. FC Lokomotive Leipzig. The highlight for him was reaching the final in 1987 for the European Cup Winners' Cup . The 1. FC Lokomotive Leipzig prevailed in the semifinals in front of an officially 73,000 spectators in the central stadium only after penalty shoot-out against Girondins Bordeaux . Müller saved two penalties and shot the decisive penalty himself. The final against Ajax Amsterdam in Athens was lost with 0: 1 (goal: Marco van Basten ).

In 1996 René Müller returned to VfB Leipzig as a goalkeeping coach . In the 1998/99 season he was assistant coach of the 1st team. After his release in April 1999, he worked as a goalkeeper and amateur trainer at Eintracht Frankfurt . Then he worked at VFC Plauen in the southern relay of the Oberliga Nordost . In 2003, Müller moved to the regional division FC Rot-Weiß Erfurt and was able to seamlessly build on his successes in Plauen. With a completely new team, Müller and the Thuringians managed to get promoted to the 2nd Bundesliga after the club had played third-rate for twelve years and the desired return to the 2nd Bundesliga had failed several times. In the following season, René Müller's winning streak broke. Once again he radically changed the Erfurt squad, but the numerous newcomers could not meet expectations and the mood in the team and the Erfurt environment deteriorated increasingly. After numerous controversial decisions, including the banishment of Erfurt's audience favorite Ronny Hebestreit to the stands or holding on to goalkeeper Claus Reitmaier despite miserable performance, René Müller was dismissed on February 20, 2005.

From July 1, 2005 to November 7, 2006, Müller was the coach of the northeast upper division Hallescher FC . He was fired because of internal squabbles and lack of success. During his time at HFC, Müller repeatedly criticized the conditions in the Oberliga Nordost of the NOFV . His criticism was also directed against parts of his own fans after they had repeatedly insulted and physically assaulted the player Adebowale Ogungbure from FC Sachsen Leipzig with racist slogans. Parts of the club's management and the supporters have never forgiven him for this behavior.

From June 2007 to April 2011 he coached the second team of 1. FC Nürnberg . Before his contract expired, Müller was released from his work as a U23 coach by mutual agreement.

A well-known photo motif from Müller's career is the hunt for the Gallic rooster, the mascot of the Équipe Tricolore in Leipzig's central stadium. When World Cup qualifier against France on September 11, 1985, the goalkeeper chased the 2: 0 victorious DDR selection, the poultry from his criminal dream - dove unlike Sepp Maier but not under the bird.

On the 24th match day of the 1987/88 season , the Leipzig team continued to fight head to head with defending champion BFC Dynamo for the league title. Since Lok coach Hans-Ulrich Thomale could not be satisfied with the goalless home draw against FC Carl Zeiss Jena , he tried René Müller in the storm for the last five minutes. While the substitute reserve goalkeeper Joachim Niklasch moved between the posts and Dieter Kühn left the field, the national goalkeeper tried on May 14, 1988, ultimately unsuccessfully in the attack with his teammates for the winning goal. At the end of the season 1. FC Lok landed level on points with the BFC, but with the poorer goal difference, in second place in the table and had to give the East Berliners the title.

In 2009, Müller's biography "Ins left upper corner" was published, in which he talks about his career and which is named after the goal of his most famous goal, the decisive goal in the penalty shoot-out against Girondins Bordeaux in the 1987 Cup Winners Cup semi-final second leg.