The season was marked by the duel between Berlin's FC Dynamo and 1. FC Lokomotive Leipzig . Except on the fifth and sixth day of play there was never more than two points difference between the two teams. The last championship was the BFC Dynamo , which secured its tenth championship in a row due to the better goal difference against 1. FC Lokomotive Leipzig . At the same time, the BFC won the double from national championship and cup for the first time by winning the FDGB Cup in 1987/88 .

For the first time in ten years , the army club FC Vorwärts Frankfurt / O rose. back from the House of Lords. The steel team from Riesa , who had also been relegated , left the top division of GDR football after five years of membership in the league and did not return to the upper house until East German football was resolved. 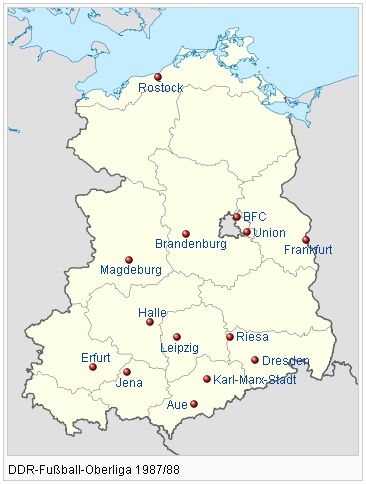 The cross table shows the results of all games this season. The home team is listed in the left column and the visiting team in the top row.