Due to numerous mergers as well as the upheavals caused by the Second World War and a bankruptcy case, the history of BSG Stahl Riesa and the sports communities in whose tradition the club sees itself is very complex.

The FC Wettin Riesa, founded in 1909 by former members of the ATV Riesa, was affiliated to the Riesaer SV on July 6, 1917.

The Riesaer SV was promoted to the Gauliga Sachsen for the first time in 1936 , at that time the top division in Germany. Although the club rose again after only one season, but managed to rise again in 1940. During this time, the club produced a national player, Willi Arlt, who was just 17 . With the end of the Second World War , Riesaer SV was banned and dissolved.

Since during the time of the Soviet occupation the formation of sports communities was initially only possible at the municipal level, SG Riesa was founded in 1945. In the course of the reorganization of company sports on a production basis, the BSG Stahlwerk Riesa was created on September 1, 1948, a company sports association , which the sports association formed in 1945 joined the following year. 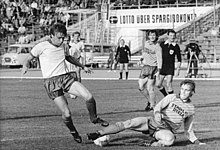 Thomas Doll (left) from BFC Dynamo in a duel with Sven Kretzschmar from Riesa, 1987

On April 1, 1950, the BSG steelworks was renamed BSG Stahl Riesa, as it belonged to the steel sports association . When so-called sports clubs were formed in 1954 in the GDR as a focus of performance, the football section of BSG Stahl had to join the new SC Stahl Riesa. When the sports club was dissolved three years later, it was reintegrated into BSG Stahl.

1963 succeeded the promotion from the third class II. DDR -Liga to the second highest division and at the end of the DDR-Liga season 1967/68 made Stahl Riesa after a 3-0 victory at activist Karl-Marx Zwickau for the first time the promotion to the highest Major League DDR-Oberliga perfect.

Overall, Stahl Riesa played sixteen seasons in the top division of the GDR between 1968 and 1988 , mostly against relegation. The best placement was achieved in 1974/75 with the sixth place, with which the Riesaers just missed qualifying for the UEFA Cup .

On July 1, 1995, Riesaer SV and SV Blau-Weiß Riesa merged to form Riesaer SV Blau-Weiß. The SV Blau-Weiss had emerged in 1990 by renaming from the BSG Robotron Riesa founded in 1978, the carrier operating the VEB Robotron electronics Riesa was.

Exactly three years later, on July 1, 1998, the next merger took place: This time Riesaer SV Blau-Weiß and SC Riesa-Röderau merged to form FC Stahl Riesa 98. Riesa-Röderau, for its part, counted the football departments of BSG Chemie Riesa, founded in 1948 as BSG Gummiwerk, as well as BSG Aufbau Riesa, founded in 1950, among its forerunners. In 2000 the FC Stahl Riesa 98 succeeded in being promoted to the NOFV-Oberliga Süd .

Two years later, however, insolvency proceedings were opened against Stahl Riesa , which ultimately led to the end of the first men's team and the dissolution of the club in 2003. The remaining teams and their starting rights in the respective leagues were taken over by SC Riesa without this becoming a legal successor to FC Stahl. This applies, among other things, to the second men's team of FC Stahl, which played in the district class until summer 2003 and started as the first team of SC Riesa in the same league from the following season.

At an extraordinary general meeting in March 2012, it was unanimously decided that the club should be called Ball Sportgemeinschaft Stahl Riesa with immediate effect. The abbreviation is thus BSG Stahl Riesa and is a reminiscence of the Stahl Riesa company sports association from the time of the GDR, whose logo the club has been using since 2012. The teams ran for the first time in the 2012/13 season under the name BSG Stahl Riesa. The first men's team reached the district league championship in 2013 and rose to the sixth class Sachsenliga , in which they finished the first 2013/14 season with 12th place in the table. On July 1, 2014, SC Riesa dissolved its football department "in the interests of strengthening football in the region", which then completely joined BSG Stahl Riesa. Both football departments had seen each other in the tradition of BSG Stahl Riesa from the GDR era, which is now united.

The seasons 14/15 and 15/16 of the Sachsenliga closed Stahl Riesa each with 4th place. In the following years (until 2020) this success could not be repeated, but the class was held. 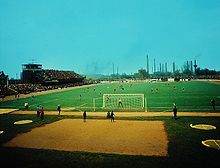 During the GDR era, the SC and BSG Stahl Riesa played their home games in the stadium of the steelworkers " Ernst Grube " (short: Ernst Grube Stadium ), which was handed over on May 29, 1955 with over 11,000 spectator seats. After being promoted to the GDR league, the stadium was expanded to a maximum capacity of 15,000 spectators in the summer of 1968. “Die Grube”, as the fans called the stadium, was the home ground of the then dissolved FC Stahl Riesa 98 until 2003 and remained unused for years. After years of vacancy and decay, the stadium is almost impossible to renovate. The cost of repairs would be at least three million euros, which the city does not want to invest. There is also no approval for the operation. A sports facility concept is to be drawn up in summer 2016 and the future of the “pit” is to be clarified. Building mayor Tilo Lindner sees no prospects for the venue and demolition is highly likely. A development with residential buildings and parking lots is favored as subsequent use.

In the first two years after the club was founded in 2003, TSV Stahl Riesa played its home games in the park stadium of SV Seerhausen in the Stauchitz district of Seerhausen , eight kilometers away , as there was no suitable venue in Riesa itself.

In the summer of 2004, the club leased the grounds of the stadium at Merzdorfer Park from the city and began extensive renovation and renovation work together with fans and players. On June 25, 2005, the new home ground was officially inaugurated on the occasion of a test match against city rivals SC Riesa in front of over 1000 spectators and was given the name Noodle Arena. Name sponsor is the pasta Riesa GmbH . At the beginning of 2016 the stadium was renamed the Stahl-Arena and in July 2017 the Feralpi-Arena.

On August 27, 2006, BSG Stahl Riesa set the German record for the longest series of competitive games without a defeat. On that day, the first men's team won 3-1 against SG Kesselsdorf under the old club name TSV Stahl and overtook the previous record holder, TSV Buchbach , with this 76th match without defeat . With 74 wins and two draws, the players scored 515 goals and conceded 50. With two more wins (3: 1 against SG Weixdorf and 1: 0 at Post SV Dresden ) the series could be expanded to 78 games without defeat, before the Riesa team on September 23, 2006 in a 0: 2 against SpVgg Grün-Weiß Coswig lost a point game for the first time.