SG Dynamo Dresden started the season with six wins. On the ninth matchday they were overtaken by FC Dynamo from Berlin . The BFC did not give up the championship lead and secured the eighth championship in a row. In the second half of the season, the Dresden team could not match the performance of the Hinserie (10 points in 13 games) and ended up in sixth place.

Promoted BSG Sachsenring Zwickau was bottom of the table from the ninth game day. From the 15th matchday onwards, FC Hansa Rostock was in 13th and penultimate place. Three game days before the end of the season they were both relegated.

The season is remembered by many fans because of the game between Lok Leipzig and BFC Dynamo on March 22, 1986. Host Lok led to the end of normal time with 1: 0 (scorer Olaf Marschall ), referee Bernd Stumpf but did enact a very long time and decided after a rather innocuous foul on BFC player Bernd Schulz a penalty for Berlin, Frank Pastor to 1 : 1 transformed. For many football fans and reporters, it was an obvious manipulation, they spoke of the " shame penalty from Leipzig ". After an investigation by the GDR Football Association, Stumpf was banned from the Oberliga and GDR League. In 2000, however, a hitherto unpublished video emerged which had been recorded from a different perspective for soccer training purposes during the game in question and which clearly shows that the BFC player was pushed.

The cross table shows the results of all games this season. The home team is listed in the left column and the visiting team in the top row. 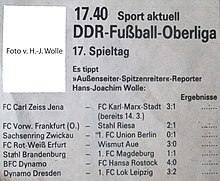