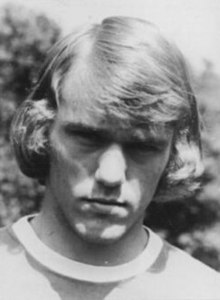 Rüdiger Schnuphase (born January 23, 1954 in Werningshausen ) is a former German football player. He was active in the GDR Oberliga , the top division of the East German Football Association , in which he played for FC Rot-Weiß Erfurt and FC Carl Zeiss Jena . Schnuphase is 45 times GDR national player.

Schnuphase began with football as an eight-year-old in his home community of Traktor Werningshausen. At the age of ten he switched to SC Turbine Erfurt, which later became FC Rot-Weiß. He went through the compulsory youth teams and played from 1970 in the junior league. The people in charge of the GDR junior national team quickly became aware of the talented striker, and so he played his first international junior game as a center forward in the 1-1 draw between the GDR and Czechoslovakia on September 5, 1970. By 1972 he had a total of 30 international matches with the junior selection. After he had first found his regular position on the left side of the storm, he was used at the UEFA youth tournament in 1971 as a Libero and reached second place with his team. At times he was the captain of the junior team. From 1973 on, he was used in 15 games of the youth national team.

His first games with the men's team of FC Rot-Weiß denied Schnuphase in the 1971/72 season in the second-rate GDR league , because Erfurt had previously been relegated from the league. With 14 of 30 games and eight goals, he had a share in the immediate rise. In the following league season 1972/73 Schnuphase was used from the first day of play and was already regular player of the FC Rot-Weiß with 25 of 26 possible point games. He played in both central and left midfield and was the second top scorer in his team with nine goals.

On June 17, 1973 Schnuphase came to his first international match. In the encounter Iceland - GDR (1: 2) he was called up in the right midfield. By 1976 he had already played nine games with the national team , including two games at the 1974 World Cup (Netherlands 0-2, Argentina 1-1). At FC Rot-Weiß Erfurt Schnuphase had played 95 league games from 1972 to 1976, but the club was not among the elite of GDR football. In order to secure Schnuphase's further development in the national team, in the summer of 1976 the football association arranged for it to move to FC Carl Zeiss Jena, which at that time had the most national players. But the development stagnated at first, because in the following two years Schnuphase only played twice in the national team.

At FC Carl Zeiss, however, Schnuphase fitted in without any problems, again completing all 26 league point games as a midfielder in the 1976/77 season and scoring ten goals. In the spring of 1978 there was a decisive change in Schnuphase's football career. After Ulrich Oevermann's long-term absence , FC Carl Zeiss was looking for a new Libero. Coach Hans Meyer remembered the sniffing libero role in the junior national team and ordered him from midfield to the position of the last man. Schnuphase played there until the end of his engagement in Jena.

From 1978 Schnuphase regained a foothold in the national team. After a year and a half, he was on November 15, 1978 in the European Championship qualifier Netherlands - GDR (3-0) again in the A selection. From then on he was part of the regular player base and by the end of his career had 45 senior internationals, contrary to his club development, but only in the last games in 1983 as a Libero. Before that he played either pre-stoppers or in midfield. In 1980 Schnuphase was also part of the squad of the GDR Olympic team , after he had already played a qualifying game with this team in 1975. In 1980 the GDR entered as defending champions and did not have to qualify. At the Olympic soccer tournament in Kiev and Moscow, Schnuphase was used in all six games and won the silver medal with his team (final: GDR - Czechoslovakia 0: 1).

Schnuphase had already reached a final with FC Carl Zeiss a few weeks earlier. On May 17, 1980, the Jenaer contested the final of the GDR soccer cup and won with Libero Schnuphase in extra time with 3-1 over FC Rot-Weiß Erfurt. Jena had thus qualified for the competition for the 1980/81 European Cup Winners' Cup. After eight games, all with a sniff, FC Carl Zeiss had reached the final. There they lost against Dynamo Tbilisi with 1: 2. Schnuphase also took part in this game and came second again in his career.

Schnuphase suffered the same fate in the same 1980/81 season when he was only second in the GDR championship with FC Carl Zeiss. However, it was the best result for him in the GDR Oberliga. A year later he caused a curiosity in the league when he was the top scorer there as a Libero with 19 goals. For this he was voted Footballer of the Year 1982. In November 1983 Schnuphase suffered a serious head injury in the European Cup match between FC Carl Zeiss Jena and Sparta Rotterdam (1-1), which put him out of action for two months. In the second half of 1983/84 he completed ten league games for Jena, after which he ended his engagement there. Rüdiger Schnuphase played 260 competitive games for FC Carl Zeiss Jena and scored 111 goals - GDR Oberliga 196 games (94 goals); FDGB Cup 29 games (9); European Cup 35 games (8).

After the 30-year-old sniff was no longer able to play in the national team, he returned to FC Rot-Weiß Erfurt. There he was used immediately from the 1st game day on in the libero position in 1984/85 and played through to the 20th league game day without interruption. On the 21st day of the game Schnuphase was injured again and could only be used again in the league on the 2nd day of the 1985/86 season. After a total of eleven league games this season, Schnuphase ended his career as an active soccer player in the summer of 1986. His last league game he played on February 22, 1986 in a 0-1 defeat against FC Carl Zeiss Jena. He had increased his league games for Erfurt to 123 and thus came to a total of 320 appearances in the league. He is 28th among the GDR league players and with his 123 goals he reached seventh place in the GDR scorers list.

Rüdiger Schnuphase has a football teacher’s license and started as a junior coach in Erfurt in 1986. In 2014 he worked as a selection coach for the Thuringian Football Association (TFV) in the youth field.