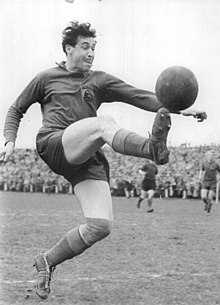 Krause 1958 as a player at Lok Leipzig

Rudolf Krause (born January 21, 1927 in Leipzig ; † December 12, 2003 there ) was a soccer player and soccer coach in the GDR . He was a doctor of education, sports teacher and law graduate.

With the start of football games, which were regulated again after the Second World War, in 1946, Rudolf Krause registered at the age of 19 with the Stötteritz sports club in the east of Leipzig. There he played one season and in 1947 moved to SG Probstheida, a sprawling predecessor of 1. FC Lokomotive Leipzig and at the end of the 1940s one of the strongest soccer teams in Leipzig. When the DS-Oberliga was founded in 1949 as the highest East German football class , Krause joined the ZSG Industrie Leipzig team that played in this league. Just one year later, he was with this team, now renamed BSG Chemie Leipzig , GDR football champions after a 2-0 playoff against Turbine Erfurt . As an inside striker, he scored 18 goals that season (1950/51) and was Leipzig's top scorer. In the following season, Krause proved to be even more accurate and was top scorer in the league with 27 goals together with Kurt Weißenfels from Stendal .

At the beginning of the 1952/53 season, the police team Vorwärts Leipzig , which had only finished 15th in the 19th field of the Oberliga in the past season, began to move the best players of the local rival chemistry. In the winter of 1952, eight players finally switched to Vorwärts, including Rudolf Krause. However, he was the only one who did not join the barracked People's Police , to which the team was subordinate. Just a few weeks later, the leadership of the police sports association Vorwärts caused the team to move to Berlin. When the forward team was relegated from the league in the summer of 1953, Krause returned to Chemie Leipzig. After forming a sports club in 1954, Krause, like most chemistry players, joined SC Lok Leipzig . When he ended up on a disappointing 11th place in the league at the end of the 1954/55 season, Krause and his coach Alfred Kunze were transferred to third division Lok Weimar on probation . At the beginning of the 2nd half series in 1956, Krause was allowed to play again for SC Lok Leipzig. In December 1961, Rudolf Krause resigned from active football. He had completed 102 league games for Chemie Leipzig, 5 for Vorwärts Leipzig / Berlin and 147 league games for Lok Leipzig and scored a total of 111 league goals.

Although Rudolf Krause was a successful goalscorer and brilliant technician, he only made two appearances in the GDR national soccer team . He received his first appearance on June 14, 1953 in the game against Bulgaria in Dresden (0-0). Krause was called up on the half-left storm side, but was replaced at halftime by Horst Franke from Briesker . It took three years before Krause got another chance in the national team. On September 20, 1956, the GDR played in Karl-Marx-Stadt against Indonesia (3: 1). Krause was substituted on for Horst Assmy , but could not recommend himself as a goalscorer. There were no further selections afterwards.

After the end of his active career, Krause completed an apprenticeship as a football coach and initially looked after the lower-class team from Stahl Lippendorf from 1961 to 1963. He was then appointed as a trainer at the newly founded SC Leipzig . In his first season 1963/64 he had to accept the shame of handing over the championship title to the local rival and “rest of Leipzig”, the BSG Chemie. His SC was third, but he was also defeated in the GDR Cup final (2: 3 against Aufbau Magdeburg ). When SC Leipzig was only fourth behind Chemie in 1965, Krause had to leave and trained BSG Chemie Zeitz in the second-rate GDR league for one season .

In 1968 he was assigned the training of the GDR junior team. With her he won the 1970 UEFA youth tournament, the forerunner of the U18 European Championship, by drawing lots after a 1-1 draw in the final against the Netherlands. Previously, the juniors he supervised had already taken second place after drawing lots at the junior tournament in 1969 (1: 1 against Bulgaria), in 1973 the team came second after a 2: 3 final defeat against England. From 1976 to 1978 Krause was in charge of the GDR youth team.

For the football tournament of the 1980 Olympic Games in Moscow, the GDR Football Association decided to set up a separate Olympic selection from the senior national team . Rudolf Krause was appointed responsible trainer in 1979. Since the GDR was the defending champion, they could take part in the final tournament without qualifying, but had previously played over 20 preparation games. The GDR selection reached the Olympic final after four wins and one draw, but lost to Czechoslovakia 0: 1 on August 2, 1980.

After another two-year interlude as a coach of the youth team, Krause was appointed head coach of the GDR national team in 1982. His job was to qualify the team for the 1984 European Football Championship . After three defeats in a row against Scotland and twice Belgium as well as a goalless draw against Switzerland, the GDR had already failed two rounds before the end of the qualifying round. The DFV then decided at a meeting on September 23, 1983 to release Krause from his work as national coach. In the 17 games under his leadership, the GDR national team achieved 8 wins, 4 draws and 5 defeats. Rudolf Krause then worked as a consultant for the U16 and U18 selection teams until his early retirement in 1990.