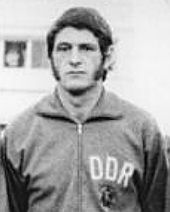 Matoul as a national player in 1974

The striker Hans-Bert Matoul began his league career at Chemie Leipzig . In the 1966 FDGB Cup final , he scored the golden goal for the 1-0 win over Lokomotive Stendal . By 1971 he played 82 league games in which he scored 22 goals.

He experienced his best time after moving to local rivals 1. FC Lokomotive Leipzig . He scored a total of 39 goals in 76 games and was top scorer in the GDR football league with 20 goals in the 1973/74 season . He also stood with Lok in the 1973 cup final and the 1973/74 UEFA Cup semi-finals . In preparation for the 1974 World Cup , Matoul played 3 international matches for the GDR national team . On February 26, 1974 he made his debut against Tunisia in Tunis (4-0), two days later in Algiers he shot against Algeria the intermittent 2-0 penalty (final score 3-1). His last international match was on March 13, 1974 at the Friedrich-Ludwig-Jahn-Sportpark in Berlin in a 1-0 victory over Belgium . He was not nominated for the World Cup finals in Germany.

When his father, who ran a bakery in Langeln, was no longer able to work for health reasons in 1974, Hans-Bert Matoul surprisingly ended his first division and international career and took over the family business. He first played in the BSG Tractor Langeln, and in March 1976 he moved to the GDR league team, Einheit Wernigerode . With the Harzstadters he played in the second-rate GDR league until 1980 , where he was mostly used as a defender in the end. After Einheit Wernigerode was relegated in 1980, he ended his playing career and took over the coaching position at Einheit. In 1981 he led the team back to the GDR league. Until the restructuring of the league in 1984 (now 2 instead of 5 seasons), the team remained second class.

After FC Sachsen Leipzig was founded in 1990, Hans-Bert Matoul was considered a hot candidate for the coaching position, but Jimmy Hartwig was ultimately preferred to him. After that, things calmed down around him. Today he lives in Wernigerode and has been a graduate economist since 1999 .