Peter Ducke (born October 14, 1941 in Bensen , Sudetenland ) is a former football player from the GDR . The striker played in 68 international matches for the GDR national team and won the bronze medal with the national team at the 1972 Olympic Games . 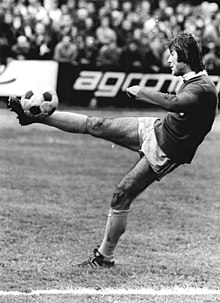 Peter Ducke's family had to leave their home in the Sudetenland after the Second World War and settled in Schönebeck (Elbe) near Magdeburg . After both his father and his three brothers were involved in football, Peter Ducke also turned to this sport and began his football career in 1950 at the local company sports association Motor Schönebeck , whose 1st men's team in the State League Saxony-Anhalt (2nd . League) played. In the summer of 1955, his older brother Roland Ducke went to the GDR upper division club SC Motor Jena and later tried to accommodate his younger brother there. In the trial training, however, this was not particularly convincing, so that he was sent back home.

It was only after convincing performances in five international matches with the GDR junior team between 1959 and 1960 that Peter Ducke became interesting for the Jena team, and so he moved to SC Motor Jena at the beginning of the 1959 league season. In his second season he was able to record his first major success. On October 7, 1960, he and his team won the GDR soccer cup with a 3-2 win over Empor Rostock . With his two goals he was instrumental in this success. By winning the cup, Motor Jena laid the foundation for a successful era that would last for over 20 years. 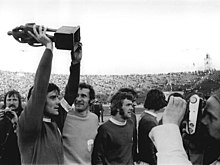 During Duckes active time, Jena, later acting as FC Carl Zeiss Jena, was three times GDR champion and cup winner. As the team's center forward, Ducke was instrumental in these successes with 153 goals within 18 years. This puts him in third place in the top scorer list of the GDR league. From 1960 to 1964 and again in 1969 Ducke was the most accurate goalscorer in the Jena, in 1963 he was the top scorer in the league with 19 goals. This prompted the senior division coach to vote Ducke the best center forward of the 1962/63 season in a survey by the newspaper Deutsches Sportecho. His senior league career could have been even more successful had he not been incapacitated for a long time by a double fracture of the tibia and fibula in 1966 and a meniscus injury in 1974. A ten-week suspension because of his freaking out at 1: 2 against SC Aufbau Magdeburg in the 1965 cup final also contributed to Peter Ducke being only twelfth on the list of top league record players with 352 point games. His exuberant temperament also gave him several expulsions with subsequent bans. In spite of everything, his playing skills and his spectacular actions made him a football favorite throughout the GDR, nicknamed "Black Peter". In 1965 he was named Sportsman of the Year and in 1971 Footballer of the Year. At the end of the 1976/77 season, Peter Ducke ended his active career.

Even as a player for Motor Schönebeck, Peter Ducke was used in the junior selection of the Magdeburg district and already attracted attention there as a goalscorer. As a result, he was also appointed to the GDR junior team and participated there in the 1960 UEFA junior tournament, among other things. In the same year, when Ducke was only 19 years old, he was appointed to the senior national team for the first time. At 5: 1 on October 30, 1960 in Rostock, he played alongside his brother Roland and made a successful debut with a goal. With his last international match on November 19, 1975 (1: 1 against Czechoslovakia), he came to a total of 68 internationals in which he scored 15 goals.

At the only World Cup participation of the GDR national team in 1974, Peter Ducke was only used for a short time due to an injury that had not yet fully healed. In the legendary 1-0 victory over the DFB selection, he was not on the field. His only noteworthy international success he achieved with the soccer Olympic selection of the GDR . On September 10, 1972, he stood in Munich in the small final of the Olympic football tournament , which after a 2-2 win against the Soviet Union brought both teams the bronze medal. Between 1971 and 1975 Ducke played 13 times in the Olympic selection and scored two goals.

After the active time

Even after completing his active career, Peter Ducke remained loyal to the Jena Club and worked as a trainer in the youth field. In January 1980, FC Carl Zeiss dismissed him as a coach and excluded him from being a club member because he was accused of having illicit contacts with West German citizens. Then Ducke worked for a year in the training center of the Gera district and then took up a degree in physical education at the University of Jena. After completing his studies, he worked as a school sports teacher, including for many years in the Jena district of Lobeda . In 1993 the Free State of Thuringia wanted to dismiss him from school service because of alleged cooperation with the GDR State Security Service . However, Ducke managed to refute the allegations in legal proceedings. Since the independence of Kosovo , Ducke has been committed to the recognition of the Kosovar Football Association by FIFA .

Since 2007, the Peter Ducke soccer camp has been taking place in Kamenz in the Deutschbaselitz district at SV Aufbau Deutschbaselitz, which he supports as a soccer teacher. On July 30, 2013, Peter Ducke was allowed to sign the Golden Book of the city of Kamenz for his commitment to this football camp for the region’s youngsters.