Jürgen Croy (born October 19, 1946 in Zwickau ) is a former German soccer player. He was goalkeeper and coach in the GDR Oberliga , the highest class of the GDR football association . There he played for the company sports association (BSG) Motor / Sachsenring Zwickau , with which he won two cups. With 94 full international matches, Croy is the record goalkeeper of the GDR national team . With the GDR Olympic selection , he won the gold medal in 1976. He was voted GDR footballer of the year three times. 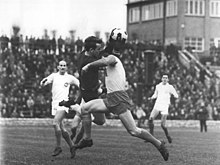 After Croy, the son of a car plumber, had played for the BSG activist Karl Marx Zwickau for eight years from the age of eight and started there as a center forward, he was delegated in 1963 as a goalkeeper to the upper division BSG Motor Zwickau. There he was first used in the junior and reserve team, and at the beginning of the 1965/66 season he replaced the former Oberliga goalkeeper Peter Meyer . His first league game was the match on the second match day on August 18, 1965 Hansa Rostock - Motor Zwickau (1: 2). In his first league season, Croy was the new goalkeeper of the league team with 24 out of 26 possible point games. With his ideal size (1.86 meters tall and 85 kilograms) and robust health, Croy remained the undisputed “number one” in the Zwickauer Tor until 1981. Of the 416 top division point games played during this time, he played 372 games and thus came to a rate of 83.4%. Only in the 1972/73 and 1978/79 seasons put him out of action for a long time. The five substitute goalkeepers in Croy's time never had a chance to gain a foothold in the league, only Günter Kirtschig (23 appearances) and Gerd Püschel (14) were able to benefit from Croy's injuries at short notice.

In 1967 and 1975, Croy won the GDR soccer cup with a motor and Sachsenring (renamed from 1968) . In the dramatic final in 1975, Croy became the hero of the day when he saved two Dresden shots on penalties against Dynamo Dresden and scored the winning goal to 4: 3 himself. In 1967 and 1975/76, Croy played all ten European Cup games in Zwickau. In the round of 16 against Fiorentina he was again successful as a penalty taker and thus played a decisive role in reaching the semi-finals, Zwickau's greatest success in the European Cup (RSC Anderlecht (0: 3, 0: 2).

Croy played his last league season in 1980/81. Even at the age of 34, he was once again through all 26 point games and thus became Zwickau's record goalkeeper in the GDR league with 372 appearances and reached second place in Zwickau's player record list behind Alois Glaubitz . From 1975 until the end of his career, Croy was team captain. Although he was a national player from 1967, he remained loyal to the Zwickau company sports association and resisted the demands of the GDR soccer association to join a soccer club as a national player as usual. In 1972, 1976 and 1978 the GDR sports journalists voted Croy footballer of the year.

1963 Croy was included in the squad of the GDR junior national team. On October 13, 1963, he completed his first junior international game in the encounter between GDR and Romania (4-1). By 1965 he was used in a total of 16 international matches of the GDR youth team and in 1965 was also part of the team that won the UEFA youth tournament (the unofficial European youth championship) after a 3-2 win over England. Seamlessly followed by five international matches with the GDR youth national team by 1968. 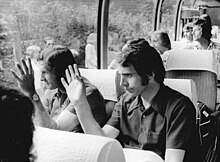 On May 15, 1967, Croy played his first game with the senior national team in Hälsingborg at 0-1 against Sweden. First he stayed behind Wolfgang Blochwitz substitute goalkeeper, only with the game Poland – GDR on October 20, 1968 did he move up to the goalkeeper of the national team. He stayed that way for eleven years until he was replaced in 1979 by Hans-Ulrich Grapenthin from Jena . On May 19, 1981, Croy was in the international match GDR – Cuba (5-0) for the last time in the goal of the national team. He had 94 full international appearances and is third in the list of record international players and number one for national goalkeepers. Croy played his most memorable international match at the 1974 World Cup when he was in goal in the GDR's 1-0 win over West Germany.

Croy celebrated his greatest success as a selection player with the GDR Olympic selection, with which he completed a total of 23 official international games between 1968 and 1976. After winning the bronze medal at the 1972 Olympic soccer tournament, he won the gold medal in Canada after a 3-1 victory over Poland in 1976, for which he was awarded the Patriotic Order of Merit in silver. In the same year, Croy received the honorary citizenship of his hometown Zwickau. His outstanding achievements both as a league player and as a national player were honored in 1989 with the election of "best footballer in 40 years of the GDR".

Croy had completed his training as a qualified sports teacher in 1975 while he was still a soccer player. This gave him the prerequisite to work as a trainer at Sachsenring Zwickau from 1982. After initially working in the youth field, he was appointed coach of the first team at the beginning of the 1984/85 season, which has only played in the second-rate GDR league since 1983 . In his first year, he led the team back to the league, but rose again immediately. Although he managed to get promoted again in 1988, he was replaced by Udo Schmuck for the top division season 1988/89 .

From 1976 to 1982, Croy was a research assistant at the Zwickau University of Education and then worked as a sports teacher. After German reunification, he first appeared as a representative of the sporting goods company Puma and later took on a job as a publishing manager for three West Saxon advertising papers.

In June 1989 Croy was appointed Vice President of the GDR Football Association for a short time until it was dissolved. When the BSG Sachsenring was converted into the FSV Zwickau after the fall of the Wall in 1989 , Croy took on functions in the presidium and supervisory board of the association. In September 1994 he was elected (independent) Mayor for Culture, School and Sport. From 2000 to 2010 Jürgen Croy was managing director of Kultur Tourismus und Messebetriebe Zwickau GmbH.

Croy is the great-nephew of Heinz Croy , who was also successful as a goalkeeper.