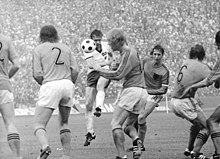 Bernd Bransch (born September 24, 1944 in Halle (Saale) ) is a former German football player in the GDR Oberliga , the top division of the GDR Football Association (DFV) . He played there for SC Chemie Halle , Halleschen FC Chemie and FC Carl Zeiss Jena . Bransch is a 72-time national player and won bronze and gold medals at the Olympic football tournaments in 1972 and 1976.

Bernd Bransch's football career began in the streets of his hometown Halle, where he played football with the children of the neighborhood when he was six. In 1951 it was decided to play in a real football team in the future, and the group joined the company sports community Motor Halle Süd. Although Bransch did not consider himself particularly talented and thought of quitting at times, he switched to the university sports club SC Wissenschaft Halle in 1955 . Here he went through the compulsory junior teams. In between, he was delegated to SC Chemie Halle in 1958 with the football section of SC Wissenschaft . In addition to his football involvement, Bransch completed an apprenticeship as a lathe operator after completing his schooling.

For the football season 1963/64 Bransch was taken over into the league collective of SC Chemie. He made his debut in the first division on the fifth match day, September 30, 1963. In the encounter Turbine Erfurt - Chemie Halle (0-0) he was used as a half-left striker. This season he was used a total of 22 times in the league and, in contrast to his debut game, played mainly in midfield. He scored four goals in these games and opened a series that spanned his entire league career: Although mainly used in the defensive area, no league season passed without a goal. With the exception of the 1974/75 season, in which he was only used 16 times, Bransch was spared serious injuries, so that he managed to be a regular player for 14 years. For just one year, when SC Chemie had to relegate in 1964, Bransch's senior league career was interrupted. The club, whose football section was converted to Halleschen FC Chemie (HFC) from 1966 , rose again immediately, with Bransch helping out as the top scorer in the GDR league with 20 goals. In the 1970/71 season Bransch reached third place, the best league placement with the HFC. In the meantime he had developed into a versatile player and always moved between different positions in midfield and defense.

In 1973 the HFC rose again from the league. At that time, Bransch was already an established national player and saw his nomination for the 1974 World Cup as a second division player in danger. He left the HFC at the end of the 1972/73 season and moved to the GDR top club FC Carl Zeiss Jena , where several of his teammates from the national team were already based. Bransch had no adjustment problems and immediately won a regular position as a Libero . On April 13, 1974, he was with FC Carl Zeiss as a sweeper in the final of the GDR soccer cup . With the 3-1 win over Dynamo Dresden, in which he provided the final goal, he won his only national title. At the end of the 1973/74 season he was runner-up with FC Carl Zeiss in the major league. He had played 25 of 26 Bundesliga point games played and had scored a goal. He played all four of Jena’s UEFA Cup games this season and scored two goals.

In the meantime, Hallesche FC had managed to regain promotion immediately, and Bransch took this as an opportunity to rejoin his old club. As in Jena, he now took over the libero position in Halle, but was only able to play 16 league games in this season 1974/75 due to injury. In the two following seasons he returned to full performance and was still used as a libero in all 26 point games. The 1976/77 season was Bernd Bransch's last league season. With the match on the last day of the match between Sachsenring Zwickau and HFC (6: 2), he concluded his competitive career. Once again he proved his accuracy with the goal of the 2: 3 intermediate result. After eleven league seasons for the Halle club, he had made 292 first division games, adding up to 317 with his stopover in Jena. As a defensive player, he had an astonishing number of 43 first division players. Because of his consistently good performance, he was voted footballer of the year by the sports journalists of the GDR in 1968 and 1974 .

Even as a junior player, Bransch moved into the field of vision of the GDR football association. In 1962 he was accepted into the squad of the junior national team and played his first international junior match as a striker on September 16, 1962 with the encounter Poland - GDR (3: 1). By 1963 three more international appearances followed, in which he acted as team captain. In 1965 and 1966, Bransch made six international matches with the youth national team.

At the age of 22, Bransch was promoted to the senior national team in 1967 . With her he came to his first international game on May 17, 1967. In the 1-0 victory in Sweden he was used as a left defender. In this position he immediately became a regular for the national team. One of his most successful international matches was the qualifier for the 1974 World Cup . In the encounter between GDR and Romania on September 29, 1973, he scored both goals to a 2-0 victory, with which the GDR laid the foundation for participation in the World Cup. At the world championship tournament, Bransch played all six games as team captain and was also part of the team that surprisingly defeated the host DFB team 1-0.

Since the senior national team was unable to win a title at either the European or World Championships, Bransch achieved his greatest international success with the GDR's Olympic team. There he had also been part of the squad since 1967 and played all six qualifying games for the 1968 Olympic football tournament, for which the GDR was unable to qualify. Bransch completed ten games of the eleven games in the 1971 and 1972 Olympic selection. This time the GDR reached the Olympic soccer tournament in the Federal Republic, and Bransch was in all seven games. In the small final he won the bronze medal with his team after a 2-2 draw against the Soviet Union according to the tournament mode. In 1975 Bransch was again part of the Olympic team. He played three of the six qualifying games. The GDR reached the Olympic tournament again, but Bransch, at almost 31 years of age, was only a substitute player. On July 31, 1976, the GDR selection was in the final in Montreal, Canada and won the gold medal after a 3-1 victory over Poland. In recognition of his services to the national team, Bransch was substituted on by coach Georg Buschner in the 85th minute, who helped him to win an Olympic gold medal at the end of his international career. For this success he was awarded the Patriotic Order of Merit in silver.

After the playing career

During his time as a soccer player, Bransch had passed his master's examination in metalworking in 1972. After the end of competitive sports, he began studying engineering and economics. Professionally, he worked as a city councilor for youth and sports in Halle. From 1983 to 1990 he was chairman of Halleschen FC, then until 1992 president or manager. After the political and economic upheaval in East Germany in 1990, Bransch worked as an insurance agent and company dispatcher and was temporarily unemployed. In 2007, Bransch took over the role of a sports advisor at Halleschen FC and became Vice President of the Halle City Sports Association.