The Munzinger archive GmbH is a German publishing and online information provider based in the Baden-Württemberg town of Ravensburg .

The information offer offers content about people from politics, business, culture, sport, music and society, about all countries of the world and about current events. The online service with several million entries is supplemented by other databases, works and portals from partner publishers and is mainly used by publishers, the press , on the radio , in political institutions and libraries . 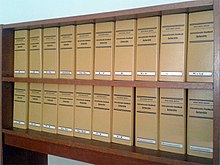 The Munzinger Archive was founded in Berlin in 1913 by Ludwig Munzinger senior , who, as a former journalist and editor-in-chief of the Berliner Dienst press agency , saw a market for an information service that should allow newspaper editors to research background information on people and subjects quickly and reliably. On March 17, 1913, the first delivery of the archive for journalistic work appeared , which from then on was continued on a weekly basis.

In 1914 Munzinger was drafted for military service in the First World War. The archive was continued to a reduced extent by his wife Cora during the war. In 1918 Munzinger returned to his family, who had meanwhile moved to Ravensburg in Upper Swabia. From around 1923 the archive became more and more successful, and in 1926 Munzinger moved the company headquarters back to Berlin.

In 1928 the publishing program was expanded to include a sports archive . In 1930 the company moved to Dresden - Loschwitz , the home of Cora Munzinger. During the Nazi era , the archive was not integrated into the NSDAP's press system or brought into line like many other press companies , but from 1936 it had to employ a censor from the Dresden propaganda administration. In 1939 the statistical-political papers were added to the publishing program. After the bombing raid on Dresden in February 1945, the Munzinger family fled again to Ravensburg, where the company is still based today.

The first delivery of the archive after the Second World War appeared in the spring of 1946. In the post-war period, the Munzinger Archive developed into a leading provider of information on current events and, in particular, biographical information for the press. The loose-leaf handbook Länder aktuell, which was developed from the statistical-political papers , with statistical and political information about all countries in the world has also become a standard work.

After the founder's death in 1957, his son Ludwig Munzinger jun. the management of the company. With the concentration of the press in the 1960s and the dissolution of numerous smaller newspaper editorial offices, the archive's clientele decreased, which is why libraries were increasingly recruited as clients for the publisher's loose-leaf works. From 1985, the publication was gradually expanded to include electronic offers, initially with an electronic sports archive. In 1995 the publishing house moved to a new building in the Oberzell district of Ravensburg . Ludwig Munzinger retired from the management of the publishing house in 2000. His son Ernst Munzinger has been managing director since 1988.

The company had lost a large number of customers in the years after 2001 due to the ever increasing consolidation of newspaper editorial offices and due to digitization . This was absorbed by the development of our own online portal and the offers to libraries.

Munzinger's booth at the 106th German Librarianship Day 2017 in Frankfurt

The Munzinger Archive has been offering information on the World Wide Web for a fee since 1997 ( Munzinger Online ), and an intranet database has also been available since 1999 . All of the company's own publications are still available on CD-ROM and as a loose-leaf collection for subscription.

The online version of the International Biographical Archive now contains more than 30,000 biographies. New contributions are added to the inventory on a weekly basis. The International Sports Archive contains around 12,000 biographies of athletes, the International Pop Archive contains around 2,000 biographies of artists and bands as well as articles on technical terms in music. In addition to other Munzinger information services, such as countries , chronicles and memorial days , Munzinger Online also provides the critical lexicon for contemporary German-language literature , the critical lexicon for contemporary foreign-language literature , Kindler's literature lexicon , the lexicon of illustration and the database of contemporary composers from edition text + review available. The online program also includes the film-dienst database (with reviews from the magazine Filmdienst ), 18 Duden dictionaries and encyclopedias , 18 works from the Duden Basic Knowledge School series , a press area with newspapers and magazines such as Der Spiegel or Die Welt , an access to PressReader as well as access to the music of the Naxos Music Libraries . The Brockhaus Encyclopedia (only the text, no images) was removed from Munzinger at the end of 2015 because Bertelsmann gave up the lexicon division and a licensee has since set up its own multimedia portal.

Many public and academic libraries offer their registered users free access to Munzinger Online , which can also take place outside the facility. Libraries can subscribe to the modules individually.

In addition, individual documents can be called up for a fee after registration for everyone.