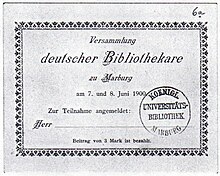 The German Librarianship Day takes place annually in different locations, the first was organized in Marburg in 1900 . It is the largest national advanced training event for all library and information workers in German-speaking countries. For several years now, the German Library Association has held its annual conference as part of the German Librarians' Day. Every third year the Congress for Information and Library takes place in Leipzig, which is organized by the Vereinigung Bibliothek & Information Deutschland and which is also the librarian day in the respective calendar year.

The lecture slides of the Librarian Days have been published on the OPUS server of the Information Library professional association since 2001, provided the authors agree.

Since 2011 there has been a discussion about a "gender-sensitive" name for the industry meeting.

The Librarian's Day, which was planned in Hanover in 2020, had to be canceled due to the measures taken to combat the corona pandemic .

In addition to the German Librarians' Day and the Congress for Information and Libraries, there are a number of smaller events with comparable target groups and topics; these include regional library days in individual federal states, the INETBIB conference , the BibCamp and the annual conferences of the individual library associations .

The International Federation of Library Associations and Institutions (IFLA) holds its annual conference "World Library and Information Congress: ... IFLA General Conference and Council" at different locations worldwide. The last IFLA meeting in Germany was in Berlin in 2003.