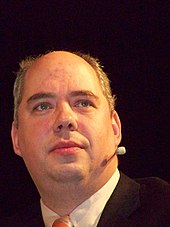 After graduating from high school in 1985, Neumann studied at an officers' college of the National People's Army (NVA) and then worked as a political officer from September 1989 to January 1990 . From 1992 to 1993 Neumann was unemployed and completed training to become a business lawyer. From 1994 to 1998 he studied law at the law and political science faculty of the Ernst-Moritz-Arndt University of Greifswald . This was followed by a speaker position at the Minister for Health and Social Affairs Mecklenburg-Western Pomerania. Neumann is married.

From 1990 Neumann was district chairman of the Party of Democratic Socialism (PDS) in Stralsund . From 1990 to 2004 he was a member of the Stralsund citizenship . On December 8, 2000, Neumann moved up for MP Heike Lorenz (SED, PDS, Die Linke) in the Mecklenburg-Western Pomerania state parliament ; in the state elections in 2002 he was re-elected to parliament via the state list and left the state parliament of Mecklenburg-Western Pomerania on December 1, 2004 when he was appointed state data protection officer. In the election of the mayor of the Hanseatic city of Stralsund on May 6, 2001, Neuman received 20.9 percent of the votes in the first ballot; in the runoff election on May 20, 2001 he was defeated by incumbent Harald Lastovka ( CDU ) with 40.1 to 59.9 percent of votes. Neumann ran again on May 18, 2008 for direct election as Lord Mayor in Stralsund and achieved second place with 26.1% of the votes cast. In the runoff election on June 1, 2008, he lost 41.7% to Alexander Badrow (CDU).

Neumann was elected to the state data protection officer of the state of Mecklenburg-Western Pomerania on November 17, 2004 at the suggestion of the PDS state parliamentary group, appointed on December 1, 2004 and held the office until it was replaced by the election of Reinhard Dankert ( SPD ) on December 1, 2010 .