The December 24 is the 358th day of the Gregorian calendar (the 359th in leap years ), so stay 7 days until the end of the year.
Christmas Eve : The evening of December 24th is the eve of Christmas , and Christians of many denominations around the world begin the celebration of the birth of Jesus Christ with the Vespers service . 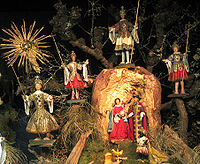 1914: Christmas peace on the western front

1968: Rise of the earth after orbiting the moon

Further entries can be found in the list of days of remembrance and action .