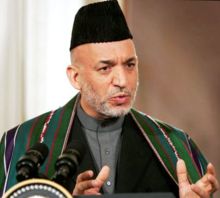 Hamid Karzai in the White House

Hamid Karzai (born December 24, 1957 in Karz near Kandahar ; alternative spelling Hamid Karzai , in Pashto and Dari (Persian) حامد کرزی, DMG Ḥāmid Karzay ) is an Afghan politician . He was President of the Islamic Republic of Afghanistan from 2001 to 2014 .

Hamid Karzai was born in Karz (كرز) was born, as indicated by his surname. He is a member of the Pashtun Popalzai clan, a subclan of the Durrani from which many Afghan kings emerged. Karzai is a descendant of Ahmad Shah Durrani . His grandfather was President of the National Council during the reign of King Mohammed Zahir Shah . His father was a senator.

Karzai studied politics at the Himachal Pradesh University in Shimla ( India ) from 1978 to 1983 . Against the Soviet intervention , the entrepreneur Karzai supported the mujahideen with part of his fortune. In the late 1980s, Karzai returned to Afghanistan to support anti-Soviet forces. After the Soviet armed forces withdrew from Afghanistan, he was Deputy Foreign Minister in the cabinet of Burhānuddin Rabbāni for two years from 1992 .

When the Taliban entered the political arena in the mid-1990s, Karzai initially supported them. However, he then broke with them and fled to the UN embassy in 1996 . In 1997 he, his father and his brother founded a counter-movement in Quetta, Pakistan . He supplied opponents of the Taliban with weapons and also supported them financially. He is also said to have had contacts with the American secret service CIA. 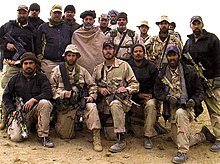 In 1999, Karzai's father was murdered and Hamid and his brother Ahmad Wali Karzai narrowly escaped. After the bloody act, Hamid inherited the title of Khan of the 500,000 Popalzai and became a leader in the armed resistance against the Taliban. Until his assassination by the Taliban on July 12, 2011, his brother Ahmad Wali Karzai was considered the largest drug producer and trafficker in Afghanistan, and was among other things on the payroll of the US secret service CIA.

After the terrorist attacks on September 11, 2001 , Karzai worked with the US and the Northern Alliance to overthrow the Taliban regime and build a new government. By the time US troops arrived in Kandahar on November 25, 2001, Karzai had signed an agreement with the Taliban that guaranteed them general amnesty and Mullah Omar a free withdrawal from the city. However, the US declared that it did not want to adhere to this agreement. On December 4, 2001, he was appointed president of an interim administration at the Afghanistan conference on Petersberg near Bonn. He was sworn in on December 22, 2001. The Grand Council ( Loja Jirga ) on June 13, 2002 then appointed Karzai President of the Islamic Transitional State of Afghanistan .

On September 5, 2002, an attack on Karzai was committed in Kandahar. A rifleman in Afghan army uniform opened fire, wounding the governor of Kandahar and a member of the US Army. The shooter and a bodyguard Karzai were killed. 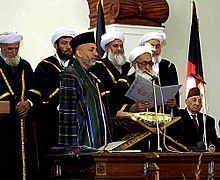 From December 14, 2003 to January 4, 2004, Karzai led a loja jirga lasting several weeks , which at the end of the day approved a majority of the draft constitution for Afghanistan as an Islamic republic . Karzai was considered a big favorite for the Afghan presidential election, which took place in October 2004. On October 9, 2004, Karzai was elected President with a majority of over 55% of the vote.

At the celebration of the 16th anniversary of the withdrawal of the Soviet armed forces on April 27, 2008, Hamid Karzai survived an attack by the Taliban in Kabul unharmed. According to the Minister of Health Mohammed Amin Fatimie, two people were killed.

In August 2009, Karzai ran again for president in the 2009 presidential election . According to a UN report, several hundred thousand votes were forged in favor of Karzai in this election. A runoff election was then planned between Karzai and his strongest rival, Abdullah Abdullah , but it was canceled because the challenger withdrew his candidacy in protest of possible irregularities.

On November 19, 2009, Karzai was sworn in for a second term in the presence of numerous international guests. He announced the establishment of a government of national unity and the convening of the Loja Jirga for reconciliation with the insurgents in Afghanistan.

During a visit to Afghanistan in June 2013, German Foreign Minister Guido Westerwelle asked Karzai to make more democratic progress and to fight corruption tougher. Three years earlier, the Afghan Anti-Corruption Agency certified that Karzai was earning $ 525 a month, had less than $ 20,000 in his bank account, and had no land or real estate. In contrast, an analysis by a Canadian ambassador in Kabul, made known through WikiLeaks , described that Karzai and his family had established a system of favoritism and control across the country.

After his successor Ashraf Ghani had to hand over the capital Kabul to the Taliban on August 15, 2021 and left the country, Karzai announced that the handover of Afghanistan should be carried out by a coordinating council, which, in addition to him, would also include Gulbuddin Hekmatyār and Abdullah Abdullah - as chairman of the national Council of Reconciliation - belong.

Connections to the economy

The French newspaper Le Monde reported on December 9, 2001 that Hamid Karzai completed his training in the USA after studying politics in India in the 1980s and worked there briefly as a consultant for the energy company Unocal . In 2010, Le Monde diplomatique reported that he had represented the company in negotiations between 1996 and 1998 to build a gas pipeline through Afghanistan with the Taliban. Both Unocal and those around Karzai denied this; possibly there is a mix-up with the future US ambassador to Afghanistan Zalmay Khalilzad . After the fall of the Taliban, the Karzai government signed a contract with Turkmenistan and Pakistan in 2002 for the Turkmenistan-Afghanistan-Pakistan pipeline , which is said to have a similar course to the previous project.

The Afghan Watan Group , which offers logistics and security services, among other things, is run by two cousins ​​Hamid Karzais, Ahmed Rateb Popal and Rashid Popal, who used to be drug traffickers. The group is supposed to pay the Taliban not to attack their convoys.

The Chinese Communist Party recognized him as an old friend of the Chinese people .

Heads of State of Afghanistan

See also : List of Heads of State of Afghanistan