from Wikipedia, the free encyclopedia
This is the spotted version , flagged on July 6, 2020 . There is 1 pending change that has yet to be viewed. 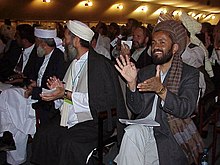 Delegate of the Loja Jirga, Kabul 2002

The Loja Dschirga or Loya Gerga ( Persian لويه جرگه; Pashtun لويه جرګه Loya Jirga (h) ) is the great gathering that is held to this day in Afghanistan , Uzbekistan , Turkmenistan and Mongolia to clarify major national and ethnic / tribal issues.

The second part of the from "Loja" (in Pashtun لويه, large in German ) and "Dschirga" ( Persian جرگه, in German tent, circle, council, assembly, meeting, dispute) originally comes from a Mongolian or Turkic language .

Such gatherings have their origins in the Altaic cultures, including the Mongol Empire. So raised z. B. the Mongolian tribal prince Genghis Khan in 1206 in a "Ger" (spoken with French "J") to their head or Great Khan .

Under the Timurids and the Mughals, although they had Turkish as well as Mongolian roots, the Loja Jirga was forgotten. On the one hand because they were "persified", on the other hand because they had viziers and diplomats who dealt with problems that affected social life, to the satisfaction of the ruler.

In Pashtun society, the Loja Jirgas are still very much practiced and cultivated today and held in front of and with tribal princes, in which social internal or external conflicts with other tribes are attempted. The reason for the existence of the Loja Jirga among the Pashtuns lies in the non-Iranian origin of some of the tribes. The Zadran (now known as Jadran by the non-Pashtuns ) were originally a Mongolian tribe, which was Pashtunized by the Pashtuns in the northern regions of the Sulaymani mountain range during the Islamization period . Other non-Iranian Pashtun tribes with a Turkish or Mongolian background are the Ghalzais, descendants of the Khaljis or the Zazais (called Jajis by non-Pashtuns).

When Pashtun princes took power, they tried to legitimize their power through this type of gathering. While initially only Pashtuns made use of Gerga or Jirga , other ethnic groups were also included later, but without really considering the non-Pashtuns. Participants are tribal or regional leaders, politicians, military or religious leaders, members of the royal family and the government. King Amanullah Khan institutionalized the Loja Jirga. He was also the only king to use it three times. From Amanullah Khan to the rule of Zaher Khan (1933–1973) and Mohammed Daoud Khan (1973–1978), Loja Jirga was understood to be a joint meeting of regional Pashtun tribal leaders.

The meetings take place at irregular intervals. Some historians suggest that this tradition is 1000 years old.

There is no time limit in a Loja Jirga and it sits in session until decisions are made. Decisions are only made based on consensus . Many different problems are discussed, such as foreign policy , declaration of war , legitimizing leaders or introducing new ideas and rules.

Differences of opinion, disputes, and even the abolition of tribal feuds were often resolved through dialogue in the form of “jirgas” meetings in different tribes. The "Jirgas" determined the political and economic, as well as religious and cultural characteristics of the Afghan people. The original "Jirgas" consisted of the political body of the village chiefs (Wakil), merchants and landowners (Khans), mullahs from the surrounding mosques, as well as poets (Schaheran) and musicians (Musiqui-Mandan).

The four pillars of Afghan society - the political, the economic, the religious and the cultural - carried the foundation of the Afghan " Politiae ", or rather in the later Kingdom of Afghanistan, arose in the eighteenth century from parts of the Eastern Persian Empire. As early as 1747, the “Loya Jirga” - large assembly - appointed Ahmad Kahn Durrani as king and legitimized his power through the vote of the tribal emissaries. Even if the procedure for appointing a king by the institution “Loja Jirga” cannot be described as democratic from today's perspective, the “Loja Jirga” represented the foundation of the Afghan state and, as a constituent body, played an extremely important role in the distribution of power in Afghanistan Role. The following rulers and political actors also recognized the importance of the “Loya Jirga”. In order to unite the different tribes and ethnic groups behind them, the political actors support themselves again and again in the existential domestic and foreign policy decisions, such as B. the question " War and Peace ", on the influence of the "Loya Jirga".

These large gatherings of all tribes and ethnic groups in Afghanistan, the "Loya Jirga", have been abused in the course of history by some political actors and rulers of Afghanistan for their political purposes in and around Afghanistan. The legitimation of the one-party state in Afghanistan by the "Loya Jirga" during the reign of Mohammed Daoud Khan (1977) turned out to be a serious mistake in foreign and domestic politics and is to be cited here as a special example. The "Loya Jirga" enabled President Daud Khan to expand his dictatorship by establishing a one-party state in Afghanistan and at the same time to persecute not only his arch-rivals, the members of the Communist Party of Afghanistan ( DVPA ) , but also the various Islamist groups and the to suppress small democratically oriented circles in Kabul.

Subsequent governments such as the communist government of Afghanistan (1979 to 1991) also used the “Loya Jirga” in various ways to achieve their political goals. During the Soviet occupation there was hardly any acceptance of the “Loya Jirga” among the population, as it staged the Soviet occupiers for the legitimation of the communist-oriented Afghan constitution (1985). During this period, the "Loya Jirga" not only met with rejection from the opposition forces in Afghanistan, but also lost its former importance as a special form of dialogue between the ethnic groups.

The following Loja Jirgas took place in the history of Khorasan (until 1857/58). The first assemblies of this kind are said to have been held from 1414 under the title Jirga e Safa (Purification Assembly ).

Timeline of Kabulistan and Afghanistan

A loja jirga took place in the history of Kabulistan :

The following Loja Jirga took place in the history of Afghanistan (since 1911): King Amanullah Khan (1919–1929) made Loja Jirga a political institution, as he called the great assembly three times:

On April 29, 2006, the Baloch minister Mir Taj Muhammad Jamali offered a meeting ( Loya Jirga ) to the Pakistani President Pervez Musharraf with the intention of pacifying the province of Balochistan . Another great jirga was held in Kalat in September 2006, which focused on the rights of the Baluch .