This article deals with the Afghan city of Jalalabad. For the city of the same name in Kyrgyzstan see Jalalabat .

Jalalabad is located about 160 kilometers east of Kabul on the Kabul River near the Khyber Pass at an altitude of about 600  m . The city ​​of Peshawar in Pakistan is only about 130 km to the south-east.

The city was called Adīnapūr before it was renamed in the late 16th century. It was a center of the Gandhara culture. Here was the famous garden of Bāgh-i-wafā, which Babur described in his autobiography Baburnama. The ground was covered with clover, in the garden there were pomegranates and orange trees. Babur imported plantains from India for the garden in 1523 . 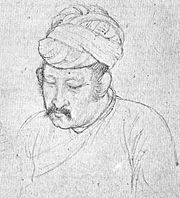 Jalalabad was founded in 1570 by the Indian mogul Akbar I. It was previously the winter residence of the emir of Afghanistan as well as a garrison town and an important trading center.

In the First Anglo-Afghan War General Robert Henry Sale was able to withstand a siege of Jalalabad by 5,000 Afghans from November 12, 1841 to April 8, 1842 in Jalalabad with 1,500 men . After learning of the forthcoming relief from General George Pollock , Sale made a sortie on April 7th and drove out the besiegers.

On February 19, 2011, several suicide bombers killed more than 38 people in a branch of the Kabul Bank in Jalalabad. More than half of the victims were members of the Afghan security forces.

On February 27, 2012, a suicide bomber blew himself up at the airport. Nine people died and eight were injured. According to the Taliban , who claimed responsibility for the attack, it was carried out as revenge for the Koran burnings at the Bagram US base .

On April 18, 2015, there was a suicide attack, which resulted in at least 33 deaths and over 100 injuries. Afghan President Ashraf Ghani blamed the Islamic State for this, even after the Taliban denied their involvement. On May 17, 2017, armed attackers stormed the Radio Television Afghanistan building . According to the spokesman for the governor of Nangarhar Province, Attaullah Khogyani, there were a total of four armed attackers. Two of the attackers blew themselves up. At least two civilians were killed in the attack and another 14 injured.

About 11 km west of Jalalabad, the ruins of two Buddhist stupas were discovered and examined near the village of Bimaran in the 19th century ; the important bimaran reliquary was found , which has since been kept in the British Museum .