The title of this article is ambiguous. For the pass of the same name on Signy Island in the archipelago of the South Orkney Islands see Chaiber Pass (Signy Island) .
k
x
x

Topographic map of the Chaiber Pass

The 1070  m high Chaiber Pass (also: Khaiber Pass , English Khyber Pass ) is the most important mountain pass between Pakistan and Afghanistan and a geographically, historically and economically important connection between Central Asia and the Indian subcontinent. The pass lies on the Spin Ghar (Safēd Kōh) mountain range .

The Chaiber Pass is located in the border area of ​​today's Afghanistan and Pakistan and connects the Afghan capital Kabul with the Pakistani border town of Peshawar . The pass bypasses the gorges of the Kabul River ( Darja-je-Kabul ), which drains the highlands around Kabul to the Indus .

Pashtun tribes have controlled the Chaiber Pass for many centuries . The AH1 is the longest link in the Asian Highway Project . It leads over the pass. 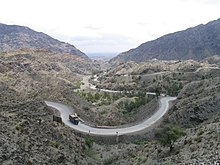 The pass was the most important connection to the Indian lowlands in ancient times. Alexander the Great used it in his Alexander campaign. The Mughals came to India through the pass. Even Marco Polo is believed to have come over this pass to Peshawar. The southern arm of the Silk Road from Bukhara to India uses this route.

Since the 16th century, the transition lost its dominant position due to the increasing importance of seafaring. In the 19th century the pass came under British control. During the First Anglo-Afghan War in January 1842 the British army, which was withdrawing from Kabul to India, was completely destroyed here. During the Second Anglo-Afghan War , the pass was occupied by the British in November 1878. At the end of the 19th century, the eastern part between Ali Masjid and Jalalabad was then in the hands of the Afridi .

From 1920 to 1925 the Chaiber Pass was opened up by the Chaiber Pass railway line from Peshawar. This was built by the British colonial authorities in order to be able to quickly move troops to the border area with Afghanistan. The route leads through 34 tunnels and has two switchbacks .

Since Pakistan's independence in 1947, it has been administered from Islamabad , although geographically most of the pass is in Afghanistan.

From 1980 the pass was practically unusable due to the Soviet-Afghan war , and rail traffic was also discontinued. During the 1990s, attempts were made to use the area for tourism, especially from Pakistan. For this, the railway line was also temporarily put back into operation.

After the fall of the Taliban in Afghanistan , the importance of the pass increased enormously: Large parts of the supplies for the International Security Assistance Force (ISAF) have to be brought from the port in Karachi to Afghanistan via this route. The Chaiber Pass is located in Pakistani tribal areas that are barely under the control of the government in Islamabad. Again and again there are attacks that endanger supplies.

The pass is the location of the 1935 adventure film Bengali and the 16th film in the British Carry-on ... film series Carry On ... Up The Khyber (Everything under control - nobody looks through) from 1968.