Mountains are complex landscape forms of the earth, which are characterized by a mass elevation of the earth's surface that clearly protrudes from the lowlands as well as terrain forms with different slopes , corresponding exposures (angle of incidence of sunlight, sun and shadow slopes) as well as diverse relief forms .

Basically, a distinction is made between low mountain ranges (more rounded peaks, open rock only locally, vegetation form only slightly different from the lowlands ) and high mountains (rather rugged peaks, rocky regions that characterize the landscape, significantly different forms of vegetation compared to the surrounding area). A determination based on the height above sea level is not generally valid and depends on regional conditions; the differentiation limit in Central Europe is around 1500 m.

37.4% of the earth's land surface is between 1000 and 2000 m above sea level . Mountains from the polar regions to the tropics are common. The largest mountains on earth are located in the west of the American double continent, in a contiguous mountain range from southwest through central and south Asia to east Asia , in the Mediterranean area and in east Africa .

The formation of mountains - in particular through the shifting of the continental plates - occurred in several epochs in the history of the earth . Each uplift was followed by a phase of removal through to extensive leveling. Therefore, the mountains that exist today are primarily a result of the most recent development phase ( Alpidic orogeny ). Today's (rump) mountains, which are assigned to older phases, are strictly speaking the result of a renewed elevation, while the unfolding of the high mountains is in part still not completed. <Burga 16>

Virtually all mountains on earth were severely affected by glaciation in the Pleistocene , so the shape of today's mountains cannot be traced back to the current climatic conditions. Most of the mountain ranges, and especially the highest among them, also belong to the tectonically active zones of the earth, and uplifts are in some cases greater than rates of erosion and denudation .

The Himalayas , a mountain range on the edge of the Tibetan highlands , amidst several other, partly related , partly different mountains

A mountain range is understood in common usage

The word “ mountain ”, on the other hand, has a regionally different perception . Elevations like the Wilseder Berg , only 169  m above sea level. NHN, the highest point in the vicinity of Lüneburg, would at best be called a hill in Alpine countries . In general, “mountain” refers to a single peak or ridge line . " Hügelland " stands for collections of small elevations, without a precise delimitation being possible.

The geology , however, refers in its definition of the "mountain foot": the mountain foot or mountain hull (if exposed), is the bedrock . In the younger mountains it is overlaid by the overburden and often pushed into great depths (down to the Moho ). In the latter terms, “mountains” already stand in the geological sense as “ rock unit ”.

Highlands - such as Tibet - are not considered to be mountains, as they have only slight differences in altitude . In contrast, some areas on a cliff can be considered mountainous despite the low elevation above sea ​​level .

See: the EU definition of mountainous country: Classification according to altitude and steepness

High mountains of the Alps: Texel group near Merano 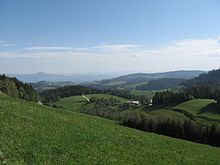 Foothills of the Alps with low mountain character : Bacher Mountains near Maribor

Mountains can also be classified according to their general geomorphological or orographic shape. The measure for this is the relief energy , dominance and notch height of the individual peaks and mountain groups:

With regard to their formation ( mountain formation ) and their internal structure ( rock profile ) one differentiates:

In a large mountain range, different mountain forms can also mix. The complex history of folding and thrusting in the Alps shows numerous small forms of other mountain types.

Global meanings of the mountains

Mountains are barriers and thus they have decisive effects on the earth in a variety of ways.

Depending on their height and extent, they have a great influence on the climate and weather . For example, with the Alps and Carpathians running from east to west, Europe is largely spared the extreme weather conditions that occur again and again in North America due to the unhindered exchange of air between north and south. In the westerly wind zone, the mountains near the sea (Rocky Mountains, Skanden, South Andes, New Zealand Alps, etc.) that run from north to south have considerable effects on the distribution of precipitation and vegetation in the western (more humid) and eastern (drier) mountain tops .

The higher a mountain range, the greater the climatic differences in the mountain area , since the air temperature decreases with increasing altitude. This leads - in connection with the mountain-typical precipitation, runoff and soil conditions - to height-dependent growth conditions for the flora, which can thus be described in vertically successive height levels . The standard model uses the orographic terminology from the “ planar ” level over the “ colline ” foreland and the (often wooded) “ montane ” low mountain range over the “ subalpine ” border area between the forest and tree line into the forest-free “ alpine ” high mountains. In addition, the shaping influences of life are rapidly decreasing, so that three further geomorphological height levels (“ periglacial ”, “ nival ” and “ glacial ”) are defined above the tree line, which include the cold desert and the practically inanimate snow and ice region.

At first glance, this sequence resembles a scaled-down image of the global climate and vegetation zones from the tropics to the poles. On closer inspection, however, the differing factors such as the annual and diurnal variations in temperatures and the intensity of solar radiation lead to corresponding differences compared to the global zones.

This close proximity of climatic and other natural conditions makes many mountains special hotspots for biological diversity . In addition, they repeatedly had a great influence on evolution , for example in the formation of species due to spatial separation ( refuge space ), in the selection of specially adapted living beings and, last but not least, in the formation of global biogeographical regions . For example, after the end of the last ice age, the Alps in Europe prevented the development of a great biodiversity in the forests, as found in North America and East Asia. The spread of man was also often based on mountain ranges. Similar to biodiversity , great cultural diversity has developed in the mountains : hardly anywhere else can so many languages, ethnic groups and heterogeneous cultural areas be found side by side in such a small space. The Papuan languages in mountainous New Guinea are a good example of this .

The diversity of the mountains has always attracted people who, due to the special geological conditions, find a number of important raw materials here : Marble from the Apennines in antiquity, firs from the Black Forest for ship masts in the early modern era or the so-called, technologically indispensable rarities Earths are just three examples of many. The colonists of the mountains have also developed special traditional forms of farming in order to use the often difficult conditions as efficiently as possible: for example, migrant livestock farming between mountain and valley or the creation of alpine pastures as additional pasture areas for cattle.

The longest aboveground mountain range on earth is formed by the Andes and Rocky Mountains and extends about 15,000 km from Alaska in the north to Tierra del Fuego in the south. It is called the American Cordilleras . The mountains of Eurasia also form a similarly long, but strongly indented mountain range, because they were created almost simultaneously by the Alpine geodynamics .

In contrast, the earth-like planets Venus and Mars hardly have such mountain ranges, but rather individual massifs - which is a result of the different mountain formation .

There are also long mountain ranges in the sea, the so-called mid - ocean ridges . For example, the mid-Atlantic ridge lies on the border of the continental plates of America on the one hand and Europe - Africa on the other.

See also : List of mountains and ridges in Germany