This article covers the continent of Eurasia. On the political ideology of the 20th / 21st Century see Eurasism . Orwell then invented the fictional superpower Eurasia in 1984 .
Eurasia 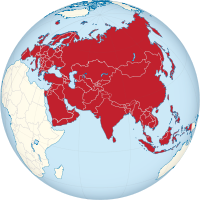 Eurasia is a geographical - geological term for Europe and Asia as a united continent . It has an area of ​​55 million square kilometers and about 4.6 billion inhabitants.

The word is an amalgamation from Europe and Asia . The term takes into account the fact that Europe and Asia have been  parts of a contiguous land mass since the Triassic - i.e. for around 250 million years: initially parts of the supercontinent Pangea , later Laurasia and now Eurasia. Geologically , the greater continent consists of four large tectonic plates , of which the Eurasian plate is the largest, as well as several small plates and cratons .

The designation of Europe as a separate continent is historically and culturally determined and goes back to the worldview of European antiquity .

In the cultural-historical sense, Eurasia describes the prehistoric and early historical cultural area of the Eurasian steppe , which extends from the Altai via Kazakhstan , southern Russia and the Ukraine to the Danube . The Hungarian Puszta is an exclave of this Eastern European level .

As Eurasians were among other Anglo-Indian referred to, are the descendants of British and Indian women. 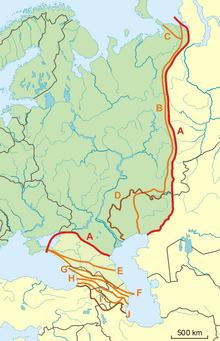 А – F: Boundaries between Europe and Asia in Russia. The conventional limit according to Strahlberg (A) is marked in red. A frequently accepted demarcation runs along the (B) Urals (mountains and rivers) and (F) the Caucasus watershed

In the absence of a clear marine border, as is the case with the other continents, which is also geophysically and culturally recognizable, any demarcation between Europe and Asia is a matter of convention. In fact, there is no definition of this limit under international law .

The undisputed borders between Europe and Asia are the straits of the Dardanelles and the Bosporus , the Black Sea and the Caspian Sea . The Russian islands Waigatsch and Novaya Zemlya , north of an extension of the Ural chain , are generally assigned to Europe and the Siberian islands northeast of the Urals to Asia. In contrast, the affiliation of the Franz-Josef-Land is viewed differently.

There are at least two definitions for the Urals as a border. One follows the Ural ridge, mostly also the watershed. In contrast, a continent border at the eastern foot of the Ural, the transition to Siberia, is marked with many monuments and border markings.

In particular in the area between the Caspian Sea and the Black Sea there is no uniform definition. In part, the Kerch Strait , the Sea of ​​Azov and the Manytsch lowlands , located about 300 kilometers north of the Caucasus Mountains , are considered to be the boundary between the continents because the present Caspian Sea was once connected to the present Black Sea in their place. Likewise, the Caucasus and especially the watershed between the north and south flanks is seen as the border between Europe and Asia. This definition dominates in the English and French speaking countries. There, the definition of the Manytn lowlands as the south-east border of Europe is often considered a special interpretation of the Russian Empire (the Manytn lowlands were the northern border of the General Government of Caucasus in the Russian Empire ). Even in the Soviet Union, some geologists are said to have preferred to draw the border on the Caucasus. In the Great Soviet Encyclopedia , the continent border to Strahlberg was entered until the last edition. Depending on which definition is followed, Elbrus , the highest mountain in the Caucasus , lies in the first case in the Asian part, in the last case in the European part, which would make it the highest mountain in Europe.

There is no clear demarcation in the Aegean either . While the Aegean and its islands used to be seen as a transition from one continent to another, the political border between Greece and Turkey , which has existed in its current form since 1923/47, has been the border between Europe and Asia since the 20th century equated, although many Greek islands are closer to the coast of Asia Minor than to mainland Greece.

History of the border

From a geographical point of view, there is no clear characteristic of an inner Eurasian border . Originally, however, the ancient Greeks (see Herodotus ) considered the Bosporus and the Caucasus to be the borders of Europe, at the time of the Great Migration and in the Middle Ages it was the Bosporus and the Tanais ( Don ) river that separated Europe from Asia (see, for example, Jordanes or Snorri Sturluson ). The last officially recognized border is that of Philip Johan von Strahlberg from the first half of the 18th century; it runs through the Manytn lowlands north of the Caucasus, then through the Sea of ​​Azov and the Strait of Kerch (Cimmerian Bosporus) to the Black Sea. For centuries there had been a dispute about the exact demarcation in the area between the Don and the Caucasus. After Strahlberg was commissioned by the Russian tsar to carry out the survey, his setting of boundaries was recognized by the tsarist house in 1730 and accepted by science. Furthermore, since modern times - starting with Vasily Tatishchev , the geographer of Peter the Great  - due to different geographical, historical and social considerations, it had become natural to regard both Urals ( mountains and rivers ) as Europe's eastern border with Asia. The preliminary results of an expedition of the Russian Geographical Society in Kazakhstan carried out in April / May 2010 have shown that the demarcation between Europe and Asia along the Ural River does not have a sufficient scientific basis. The problem is that the Southern Urals deviates from its axis and is divided into several parts. The mountains gradually flatten out and lose their importance as a geographical boundary. To  assume the rivers Ural and Emba (which - according to von Strahlberg - was also a border river; see line A) as a further geographical border makes little sense, as the terrain on both sides of the rivers is similar, and living and economic areas are also created by the Rivers not divided. As a result of the expedition, a demarcation southeast of line A was proposed: The southern part of the border extends from the southern Urals to the Mugodschar Mountains ( Kazakhstan , Aqtöbe region ), then along the southern edge of the Caspian Depression , where the Eastern European Plain ends. The Caspian Depression was formed millions of years ago when the Caspian Sea washed away the western slopes of the Ustyurt Plateau . According to scientists, this edge of geological formations should be considered the border between Europe and Asia. The name equality of the Ural Mountains and Ural River has only existed since the reign of Catherine II , who had the river named Jaik renamed, probably also to erase the memory of the Pugachev uprising , during which extensive fighting also took place in the river region had.