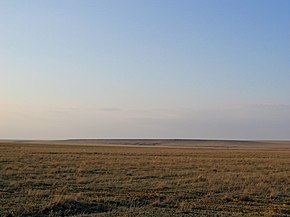 A steppe (from Russian степь step ) is a semi-arid (to semi-humid ), treeless grass and herb landscape of temperate latitudes on both sides of the equator.

At the transition from the steppe region to the deciduous forest zone, there is a zone known as the forest steppe , in which the grass steppe near water bodies and on permeable soils is interspersed with forest islands. (The tropical vegetation forms sometimes referred to as "forest steppe" in older literature , however, are savannas .)

Steppes can be classified as follows according to the reasons for their formation:

The temperate steppes include:

Another type of landscape, the tundra, is known as the “cold steppe” .

Features of the steppe

A steppe is an open, semi-arid, treeless grass landscape of the temperate zone . The vegetation is limited by a lack of water. In Eurasia , the steppes in the interior of the continent are located a great distance from the oceans , where the annual rainfall is severely limited ( continentality ). The steppe areas in North and South America arise from the lee position of the areas. Due to the seasonal distribution of precipitation , the vegetation season is often interrupted by summer drought or winter cold. The vegetation phases are only in spring and autumn .

The zonal soils of the steppes are extremely fertile humus accumulation soils with deep, humus-rich topsoil . In Germany these are called black earth.

As scientists from Lund University have established, the earth's steppes and savannahs, along with the tropical rainforests, are of great importance as carbon sinks and thus for the global climate. Around a third of anthropogenic carbon dioxide emissions are absorbed by the grasslands. 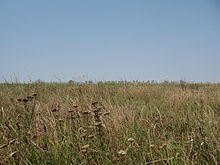 The formative plant communities of the steppe consist of grasses. You will also find mosses and lichens , but also lower shrubs such as the heather family and isolated forest islands in favorable locations. Originally, most of the cereal crops were steppe dwellers.

Although most precipitation falls in the steppe in the summer months, the plants have more water available in the other seasons. This is related to the fact that evaporation is very high in summer . But that doesn't fully explain the extent of these grasslands. Fire, intentionally started by humans or caused by lightning strikes, may play a role. In the North American steppes, the large herds of bison probably prevented the emergence of forest .

Animal species typical for steppes are z. B.

Rodents that live in large underground colonies are also common in all steppes , e.g. B. the prairie dogs in North America.

In the steppe of the temperate zone, agriculture is practiced on fertile soils such as phaeozemes or chernozemes , mostly as irrigation farming . Because of the short growing season, mainly corn and wheat are grown. Large parts of the world's wheat production come from the steppes of North America and Eurasia. The more arid the steppe's climate, the more uncertain the yields.

Where the water conditions only allow extensive agriculture , mobile animal husbandry dominates . Farm animals are z. B. Buffalo , cattle , horse , sheep , goat , camel and yak . In addition, traditional nomadic cattle breeding can still be found in some areas of the Eurasian steppe .