The Camels (Camelidae) are a mammalian family of the order Artiodactyla (Artiodactyla) within which they are the only extant family of the suborder of calluses Ohler ( Tylopoda group). They can be divided into two groups. The first group are the old world camels ( Camelus ) with the dromedary or single-humped camel and the trample or two- humped camel, also known as large camels. The second group includes the New World camels (Lamini) with the genera Lama ( Lama ) and Vikunja ( Vicugna ), the humpless small camels .

Passage of a trample. Animated Series Photography by Eadweard Muybridge (1887)

The name of the subordination ("callous soles") is the structure of the feet: In contrast to most other cloven-hoofed hoofed toes, the camels touch the ground with the penultimate and last limb of the toes. They do not have hoof shells, but rather curved nails, which only protect the front edge of the feet. The toes rest on an elastic pad made of connective tissue that forms a wide sole surface. The two toes are the central rays (third and fourth toes), the other toes are completely regressed. In addition, the metacarpal and metatarsal bones have grown together to form the so-called cannon bone and the forearm bones have also partially grown together. In contrast to the other cloven-hoofed animals, camels move in the pace , which means that the left and right pair of legs are alternately moved. For this reason, they are also called "desert ships" because they rock the rider.

Skull of a trample. The diastema in the dentition can be seen

The skull of the camels is flat and elongated, horns or antlers are absent. The upper lip is split, the nostrils can be closed. These animals have 30 to 34 teeth: there is only one upper incisor per half of the jaw , which is developed in a canine-like manner; the six spatula-shaped lower incisors protrude forward. Between the canine and molars there is a gap called a diastema . The tooth formula is given as I 1/3 - C 1/1 - P 3/2 - M 3/3 = 34.

Alpacas have no upper incisors, but a chewing plate, with the vicuñas the lower incisors constantly grow back. In addition, they have one less premolar at the top and bottom, i.e. only 30 teeth.

Camels are the only mammals that do not have round but oval red blood cells .

Although they are not included in the subordination of ruminants , camels chew again and like them have a multi-chambered stomach , which is used for better digestion of the purely plant-based food, but which should have developed independently of the stomach of the ruminants. In contrast to these, they have a three-part stomach and not a four-part stomach: two fore-stomachs, which, however, in contrast to those in ruminants , are equipped with glands , and the abomasum itself .

Since camels predominantly inhabit arid regions, they have developed a number of characteristics to help them manage their water better. Strongly elongated Henle's loops in the kidneys ensure a high concentration of urine , and the feces are thickened compared to other mammals. A special feature are the red blood cells , which are not round but oval. This shape means that camels can absorb a lot of water in a very short time (rumor has it that 200 liters in 15 minutes) without the risk of water intoxication ("overhydration" of the body). The oval shape of the New World camels has a better oxygen affinity, which enables them to survive in the thin atmosphere at altitudes above 5000 meters. The body temperature of camels is more variable than that of most other mammals and can fluctuate by 6 to 8 ° Celsius, which significantly reduces sweating .

Old World camels are characterized by their humps, which, contrary to popular belief, do not act as water but rather as fat stores - shrunken humps are therefore a sign of poor nutritional status. The adaptation of the kidneys, the mechanisms for regulating body temperature and the absorption of water vapor from the breath with the help of the nasal mucous membranes have been researched in particular by Knut Schmidt-Nielsen .

New World camels, which also include the llama and the alpaca , produce, in addition to the conventional IgG antibodies , a much more simply structured type of special antibodies, so-called heavy chain antibodies (hcIgG). These consist of only two chains instead of four and are therefore much smaller and more compact than conventional antibodies and also have greater pH and temperature stability. The special properties of their antibodies bring camels into the focus of medical research as donor organisms for heavy chain antibodies. The aim is to develop antibodies for therapeutic use. An example of a successful medical application are camelid antibody fragments for combating Trypanosoma brucei rhodesiense , the causative agent of the - without treatment - fatal African sleeping sickness . In nature, heavy chain antibodies - with the exception of camelids - have so far only been found within the class of cartilaginous fish (Chondrichthyes), more precisely in some sharks and possibly in the short-nosed chimera .

The Old World camels probably originally come from Asia - the dromedary from the Arabian region and the trample from Central Asia - but they have become widespread as livestock and can now also be found in North Africa and Australia , for example .

Their habitat are dry steppes, semi-deserts and deserts. The New World camels are mostly found in higher mountain regions in western and southern South America , where they inhabit dry, open terrain up to 5700 meters above sea level.

Camels are diurnal and mostly live in harem groups in the wild, which consist of a male, several females and their offspring. Adolescent males evicted from their birth group often form bachelor groups. For leadership in a harem group there can be bitter fights between two males.

Camels are herbivores that feed primarily on grasses. Old World camels in particular are known to be able to eat thorny or salty plants.

After a gestation period of 360 to 440 days, the female usually gives birth to a single foal. This is fleeing from the nest and can walk independently within a very short time. It is weaned after about a year and sexually mature after two to three years. Old World camels can live to be 40 to 50 years old, for New World camels an age of up to 28 years is documented.

Systematics and history of development

External systematics and history of development

The camels, together with the ruminants (ruminant) and the pig-like (Suina) to the order of cloven-hoofed animals together (Artiodactyla). (From a cladistic point of view, the whales must also be included in this group). The camels were previously considered to be close relatives of the ruminants, but molecular genetic studies place them at the basis of the cetartiodactyla (the common taxon of cloven-hoofed animals and whales). This is expressed in the following family tree:

In tribal history, the first calluses appeared in North America in the Eocene (around 40 to 50 million years ago) and were initially limited to this continent - the genus Aepycamelus is known from the Upper Miocene of North America . A representative of the camels also appeared in the mid- Pliocene around 3.5 million years ago in the forested north of America, as finds from Ellesmere Island show. They immigrated to Asia and South America via the temporarily dry Bering Strait or the Isthmus of Panama . In North America they became extinct relatively recently, the genus Camelops survived until about 10,000 years ago. Whether this extinction is due to climatic changes or the hunting by the immigrant people ( overkill hypothesis ) is controversial. 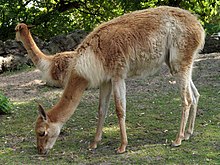 Vicuñas are the smallest living camels

Today two tribes with a total of three genera and four to six species are distinguished:

All recent camels belong to the subfamily Camelinae. In the tribe of the New World camels, the division into two genera with four species (the wild guanacos and vicuñas and the llamas and alpacas domesticated from them) is controversial, as there are also flowing transitions through crossings. These four species are sometimes combined into a single genus ( Lama ). In 2001 it was confirmed by DNA tests that the alpaca is descended from the vicuna, so that the previously used scientific name Lama pacos was replaced by Vicugna pacos . In some cases, the northern subspecies of the vicuna is also considered an independent species and is then listed under Vicunja mensalis (alternatively Lama mensalis ). There are also differences of opinion with the old world camels: The camel is sometimes divided into two types, the domesticated ( Camelus bactrianus ) and the free-living form ( C. ferus ), sometimes the dromedary is also considered to be conspecific with the camel . The genus Camelus is the only recent genus from the tribe Camelini, fossil genera represent, among other things, Camelops and Aepycamelus , the latter sometimes being assigned to its own subfamily Aepycamelinae.

Hybrid formations occur in both Old World and New World camels. Dromedaries and trampolines can be crossed with each other, the hybrids are reproductive and are called tulus or bukhts . They either have a single, elongated or a larger and a smaller hump. The New World camel species can also be crossed with one another and give birth to fertile offspring.

Hybrids between llamas and Old World camels have also been bred through insemination . The resulting hybrid was named "Cama" by the responsible scientists. 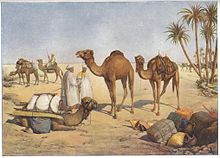 Painting of a camped caravan with dromedaries by Walter Heubach (1865–1923). The importance as pack animals and riding animals extends to the present day, although camels have given way to technical progress in many places .

The word camel comes from Semitic languages through Latin and Greek mediation . With Jamal ( DMG ǧamal ) is in Arabic , the load camel specifically meant while riding camel deloul is called. Ǧamal goes back to Neo- Assyrian gammalu and is in its earliest form in cuneiform as Akkadian ANŠE GAM.MAL on a clay tablet , which is dated to the time of ʿAmmī-itaqumma (around 1795–1750 BC) by Alalach . ANŠE is the determinative for “donkey”, referred to as the “pack animal” category.

Originally, after Grimm, the animal was called Gothic ulbandus , Old High German olpentâ , Middle High German olbente . The new name was brought back from the Orient by the Crusades : “Der olbenten, daz Walhe heizent camelum.” The current name developed from Middle High German kémel , kemmel and kembel , also kembelîn and kemelîn . With the discovery of the American camels, additional distinctive names were needed. The camels known until then are therefore referred to as those of the Old World .

A caravan of five dromedaries.

Both Old World and New World camels were domesticated in the last millennium BC . They were primarily used as pack animals and draft animals, but also as suppliers of wool , milk and meat ( camel meat ) and are often kept for these purposes to this day. The military use of camels has been around since at least the 9th century BC. Occupied. Since then the animals have been used for this purpose until today (see camel riders ).

Llama and alpaca are cultivated forms that emerged from the guanaco and possibly the vicuna . The dromedary only exists as a domesticated species - the wild form is believed to have been extinct for 2000 years. There are only remnants of the wild beasts left in China and Mongolia . The Camel Reproduction Center Dubai deals with breeding .

International Year of the Camels

In October 2017, the United Nations declared 2024 to be the International Year of the Camels to draw attention to the ecological and economic importance of camels for the population in underdeveloped parts of the world.