The title of this article is ambiguous. Further meanings are listed under Alpaca (disambiguation) .

The Alpaca ( Vicugna pacos ), also Pako , is from the South American Andes Dating, domesticated type of camel that primarily because of their wool is grown. The population of alpacas in Peru is around 3.5 million animals, which makes up about 80 percent of the global population.

Alpacas are also used in animal-assisted therapy in Europe because of their calm and peaceful character .

There are two types of alpaca, the Huacaya and the Suri . They differ in the structure of their fiber (wool): The Huacaya alpaca has a fine, evenly curled fiber and some guard hairs (outer hairs). The Suri-Alpaca, on the other hand, has no frizz in the fiber, the hair forms curly, straight strands that hang down on the animal. As a result, Suris often appear narrower than Huacayas.

As with all camels, the body of the alpacas is characterized by relatively elongated, slender legs, a long, thin neck and a small, triangular head. As New World camels , they have no hump. They are slightly smaller than llamas and reach average heights of 80 to 100 cm at the withers . With a weight of around 55 to 65 kilograms, the mares in particular are significantly lighter than llamas, but stallions can weigh up to 80 kilograms. The fur colors of the animals range from pure white through beige to all brown and reddish brown tones to shades of gray and deep black. There are also multicolored, piebald animals in many variations.

The life expectancy of an alpaca is between 20 and 25 years. 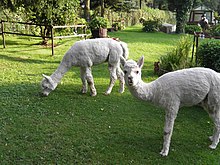 Like all camels, alpacas are social animals (herd animals) and feel most comfortable in groups. They are herbivores and feed almost exclusively on grasses. Like all camels, they have a three-part stomach that makes it easier to digest the plant food. They also do not have upper incisors , but a chewing plate .

The animals are usually shorn once a year. The raw wool can be processed into high-quality alpaca yarn. The fiber yield when shearing an animal is three to six kilograms per animal and per year, but only about one to three kilograms of this can be used.

The ovulation in the mare alpaca is only through the mating triggered (provoked ovulation). This means that alpaca mares are able to be successfully mated all year round and are not tied to a specific season or season.

The gestation period is 340 to 345 days, after which the mare usually gives birth to a single young animal - called Cria in South America . This is suckled for around six to eight months and reaches sexual maturity in an average of twelve to 24 months; individual early and late development are possible.

The domestication of alpacas as well as llamas began 6,000 to 7,000 years ago. While the lama was primarily used as a pack animal in South American civilizations, the alpaca was bred for its wool. The Inca considered an alpaca coat to be a symbol of prosperity; However, the even finer wool of the vicuñas was reserved for the ruling caste . The Incas raised large herds of alpaca. This changed with the conquest of Peru by the Spaniards, who brought sheep and showed no interest in researching the native farm animals. The alpaca became a farm animal for the poor, Indian population and was meanwhile almost extinct.

Only with the independence of the states of South America was the value of the alpaca recognized again. Breeding was resumed and the wool was exported all over the world. Today there are around three million alpacas, mostly in southern Peru, western Bolivia and Chile .

In Europe , too , more and more alpacas are being kept, partly as a hobby, partly for breeding. The breeding animals were initially imported, but now the alpacas in Europe have the necessary fiber quality and there is a tendency to pay more attention to the pedigrees. In Germany there are currently around 2000 animals, in Switzerland there were direct payments for 1875 alpacas as of 2008 .

In Germany, alpacas have been recognized as farm animals within the meaning of Section 51 Assessment Act (BeWG) since 1996 and are therefore equated with sheep or horses, for example. They can therefore be held by private individuals without further authorization. A prerequisite is species-appropriate keeping in accordance with the Animal Welfare Act (TierSchG) . With alpacas that means at least: no solitude; at least 1000 square meters of pasture for the first two animals, a further 100 square meters for each additional animal; a weatherproof shelter with at least two square meters of space per animal. A pure stable is not appropriate to the species.

In Switzerland, the keeping of alpacas according to Art. 57 and Art. 58 TSchV is subject to the following conditions, among others: With the exception of stallions, they must be kept in groups from sexual maturity and have access to an outdoor enclosure for several hours a day. Stallions that are kept individually must have visual contact with conspecifics. The lying area must be provided with litter. There must be a scrubbing area or a wallowing area in the outdoor area. Alpacas must have access to water and roughage or to pasture at all times.

It has long been unclear who the ancestor of the alpaca is. The common doctrine saw the guanaco as the common ancestor of the llama and the alpaca. Among other things, the brain size of the alpaca was cited for this: Pets have a smaller and lighter brain than the wild type, and alpaca brains are smaller than guanaco brains, but larger and heavier than brains from vicuna . However, early on there were also theories that the alpaca was descended from the vicuna. In 2001 these were confirmed by new DNA tests. For this reason, the previously used scientific name Lama pacos was replaced by Vicugna pacos .

Alpaca fiber is a soft, silky, shiny natural fiber. Compared to sheep's wool, it is warmer, finer and has a lower fat content. The entire processing of the alpaca fiber such as preparing, carding , spinning , weaving and other finishing processes are very similar to the processes of sheep wool processing.

The alpaca fiber is obtained through the grooming. Alpacas must be shorn in their hair growth and condition in accordance with Article 31, Paragraph 3 of the Farm and Domestic Animals Ordinance, so that their fur does not become matted and heat does not build up under the hair. With the Suri alpacas, the shearing interval can be set at two years, depending on the use of the animals. The care harness is used to regulate the heat balance in the hot season.