The guanaco ( Lama guanicoe ), also known as Huanako , is a wild species within the camel family (Camelidae). It lives mainly in western and southern South America and is the ancestral form of the domesticated llama .

Guanacos reach a head trunk length of 120 to 220 centimeters, a shoulder height of 120 centimeters and a weight of 100 to 120 kilograms. The fur is woolly and dense; its color is light brown on top and white on the underside, the face is often black. The fur consists of short, curled and long, wavy hair, the lower, matted layer has an insulating effect and protects against the cold, the upper layer keeps snow and rain away. Like all camels, they are characterized by relatively elongated, slender legs, a long, thin neck and a small head. The feet have two toes that have calloused pads instead of hooves. The stomach is made as with all camels of several chambers together, which facilitates the digestion of plant food.

Guanacos inhabit the Andes and the pampas in Peru , Ecuador , Bolivia , Chile and Argentina . Their habitat is open grassland, only in harsh winters they sometimes go into forests. You can find guanacos at heights of up to 4000 m.

Guanacos form family groups of about fifteen animals, which consist of a male leader, several adult females and their young. At the age of twelve to fifteen months, the young are driven out of the association by the male. The females then seek inclusion in another herd. Young males, on the other hand, form bachelor associations in which they live for three to four years. In these groups there is constant struggle for supremacy, which can be seen as preparation for the later leadership of a real herd. After leaving such a bachelor association, a male guanaco tries to establish his own territory, either by gathering young females around him or by driving away the leader of an existing herd. If an old male is driven from his herd, it usually lives as a loner until its death.

Like all camels, guanacos are herbivores and feed primarily on grasses. The food is swallowed little chewed and first reaches the forestomach to be finally digested after ruminating. This process is similar to that of ruminants (Ruminantia) - to which the camels are not included zoologically. The digestive system of the camels is likely to have developed independently of this group of animals, which is shown, among other things, by the fact that the forestomach are provided with glands.

The gestation period for females is one year. After this, a single cub is born that can walk immediately and is suckled for about 4 to 6 months. The lifespan of a guanaco can be twenty to thirty years in human care.

In the wild, their main enemy is the puma . Young and sick guanacos can also be killed by Andean jackals . 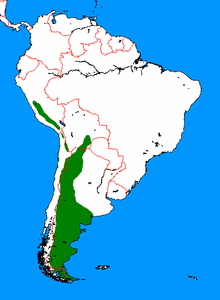 Distribution area according to IUCN

It is generally believed that the guanaco was domesticated as early as the third millennium BC and that the lama is descended from it. More recent DNA studies have shown that, contrary to what was previously assumed, the alpaca probably does not descend directly from the guanaco, but from the vicuna . However, since all New World camels can be crossed with one another and give birth to fertile hybrids , various crossbreeding of the two wild forms in both llama and alpaca cannot be ruled out.

Due to the great damage caused by overgrazing by sheep and cattle herds in Patagonia , guanacos that are better adapted to meat production are now kept on some estancias .

When the Spanish arrived in South America, there were an estimated 50 million wild guanacos. Since then they have been hunted for their fur (see guanaco fur ), but above all to gain pastureland for the sheep herds . Due to massive shooting, the numbers became smaller and smaller. Today there are around 600,000 guanacos left, just over one percent of the original number. The IUCN lists them as "not at risk".

Often the guanaco is listed as one of the three species of the lama ( lama ) genus . However, due to the parentage relationships described above and the unrestricted cross-ability , they are sometimes combined into a single species.