The guanaco , one of the humpless camels, lives exclusively in the Andes of South America up to an altitude of 4000 m (95% in Argentina). Almost only the pelts of the young animals are traded, in their home country and occasionally in the international tobacco trade under the name of Guanaquitos . In addition to the fur, the meat is also used, as well as the wool from animals that join herds of llama or alpaca.

In 1911 Emil Brass wrote of the other two species of llama , alpaca and vicuna , that vicuna fur is made into very high-quality fur blankets , but that it is only rarely found in tobacco shops . Only the wool of the alpaca is used.

The guanaco is listed in Appendix II of the Washington Convention on Endangered Species , the fur may only be traded with an export permit from the country of origin.

The hair color is light reddish brown, sharply demarcated from it is the white belly side and the inside of the thighs. The young animal's upper hair is barely developed. The fluffy, wavy hair of the young animal skins is silky and soft. It soaks up quickly when it rains, which, by the way, applies to all camel species. With age it becomes duller and woolier; the leather of older animals is also much heavier. The fur of adult animals also has a curled undercoat and slightly wavy guard hair.

The durability coefficient is given as 50 to 60 percent. When fur animals are divided into the fineness classes silky, fine, medium-fine, coarse and hard, the guanaco hair is classified as fine.

Max Bachrach differentiates according to tradition:

Río Gallegos . Southern Santa Cruz to the Punta-Arenas area of ​​the Strait of Magellan . Best. Medium reddish brown, a little darker than in the area closer to Punta Arenas.
Punta Arenas .
Santa Cruz (so-called Tierra del Fuego ) and the southwestern part of the Chubut deliver the second best type, the quality is somewhat weaker; however the color is considerably stronger.
Chubut . The much stronger color is especially true of Chubut's skins, they are very red, almost copper-colored.
Rio Negro . Also reddish; but considerably thinner in quality and very coarse.
Pampas . Similar to Rio Negros, but very pale, they look more pink than red. 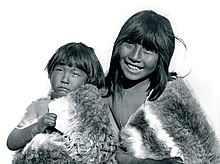 Desk fore leather made of one and a half guanaco skins (Herpich, Berlin 1910 (drawing))

The unusual fur shape and color distribution (light reddish yellow and white) pose particular challenges for the furrier . Most of the skins come to us from Argentina already made into blankets, the torso with the leg parts are interlocked to form the pattern typical of guanacoplaids.

The skins of the adult animals are mainly consumed locally. So passed z. B. the large, spacious tents, the " Tolodos " of the Pampas Indians, the Pechnechen and Moluchen (= Mapuchen ??) made of guanaco furs, as well as their storage facilities. The Indian women made very pretty blankets from the skins of the young animals, which were softly tanned, put together very tastefully and painted with geometric patterns on the leather side. 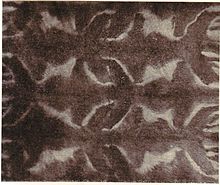 Quillango made from 8 guanaco skins.
Work of South American Indians. The skins (from animals around 4 months old) are put together in such a way that the head of one skin always comes to stand next to the pump of the other. Two heights to four heads. The white belly areas form the bright drawing. All sutures are made with animal tendons. The Quillango is used by the Indians as a cover against the injustice of the weather. (Ca.1905)

The locals wrapped themselves in wide guanaco blankets, the quillangos; they were part of national clothing. The South American cattle herdsman or gaucho used it as a saddlecloth, and on cold nights he would wrap himself in it.

Christine Papp summarized the Tehuelchen about the guanacoquillango in her dissertation:

Ibar Sierra called the quillango, the production of which he described, Sokga. The Indian women carefully sewed 15 to 20 young guanaco skins together so that the fur pattern harmonized and the finished piece was pleasant to look at. The freshly peeled fur was immediately stretched into the desired shape with many wooden pegs. Now the fur was kneaded, folded and rubbed until it was soft and supple. With an awl, a young widow observed by Sierra made small holes in the skins, the edges of which she had painted and through which she pulled thin threads made of guanaco tendons. Legs, neck and head pieces were worked just as carefully as the larger pieces of fur. The old women made the dry skins pliable with sharp but rounded stone or glass scrapers. After drying and bleaching, they were rubbed with ostrich or mare liver, sometimes with mare fat, and softened by rubbing them together. About 13 skins were then cut so that they fit exactly into one another in a large square, head to tail. A finished Quillango was on average about 1.60 × 1.80 meters, up to 1.80 × 2 meters in size (Martinic 1995, p. 253).

The parts of the skin that fell off despite the artful interlocking were also used. The mole brown of the fore-heads, the bright white of the flanks and bellies, the yellow-brown of the legs were combined with small skunk skins, wild cats and other domestic skins to create impressive, tasteful patterns (Hatcher1869 / 1903, p. 270).

The painting on the leather side is always highlighted, richly adorned with figures (Falkner 1774); Checks in different colors, e.g. B. flesh-colored and blue (Pineda 1789/1971), decorated with colorful figures (Pineda 1789); unique is the decor, always executed with perfect regularity, consisting of straight lines turned in different directions. Figures and lines, squares and triangles in a symmetrical arrangement gave a mosaic-like appearance in a wonderful mirror-like arrangement, mainly in brown (probably burnt ocher earth), black and white (Fitz-Roy 1839), but also red, blue, green, yellow, white, sometimes sky blue, pink and gray (Martinic 1995). It is reported that a woman, without first drawing a sketch, drew the patterns with thin pencils directly on the flesh side of the fur. With the pens moistened with saliva, she applied the various earth colors to the leather. When she had finished eleven or thirteen skins, they were put together with such skill that one could not see the smallest fold in the finished piece (Hatcher 1896/1903: 269f.) Each pattern had its own place, but the patterns differed among the different ethnic groups . - Occasionally the bald areas on the hair side caused by abrasion were also painted.

During the 19th century, guanaco blankets and coats became the Tihuelche's most important trading articles, exports peaked around 1870 and then collapsed. Today only a few skins can be found in museums and from private collectors. (Prieto 1997: p. 185)

Brass goes on to report that after the Indians in Argentina melted together , only a few of these blankets were left on the market. In contrast, the skins of the young Guanaquitos were exported heavily, at that time still raw, only to be trimmed mainly in Berlin and Leipzig. Before motor vehicles could be heated, they experienced some popularity as car covers and since then as a living accessory for sofas and bedrooms.

In 1930 Hermann Deutsch wrote in his chapter on guanaco (huanako ) and the knowledge of processing, which is not very widespread in Germany:

As far as I know, the processing of guanaco has not yet been described in any specialist book, probably mainly for the reason that it is almost out of the question for the furrier and the few fur blankets that are sold by the Leipzig companies that deal with the production the guanaco blankets deal, ready to relate.

Apparently the knowledge had only been forgotten, in 1899 a Scottish furrier wrote that the skins are now better processed (manufactured) in Germany than by the Indians.

The wavy coat is usually tightened and made shinier by an ironing process. A fur refiner even wrote in 1977: “The refinement of guanaco skins is completely geared towards a good hair finish with hangers. Skins that are not ironed are practically unsaleable ”.

In 1965, the fur consumption for a sheet of 20 to 26 pelts sufficient for a guanako coat (guanaquito, young animal fur) was specified (so-called coat “body” ), with “a lot of waste”. A board with a length of 112 centimeters and an average width of 150 centimeters and an additional sleeve section was used as the basis. This corresponds roughly to a fur material for a slightly exhibited coat of clothing size 46 from 2014. The maximum and minimum fur numbers can result from the different sizes of the sexes of the animals, the age groups and their origin. Depending on the type of fur, the three factors have different effects.

Guanaco fur used to be part of the Argentine people's saddle, the Recado . In addition to being made into blankets, fur linings and trimmings, in times when fashion favors long-haired furs , guanaco pelts are also made into clothing, usually into sporty jackets.

In a 1967 report by a German furrier from Bolivia, Vikuna, pronounced Vicunja , is described as the most beautiful of all lama species:

The fur of the vicuna, which occurs mainly in Peru and Bolivia, is red-yellow and beige. It is smaller than that of the llama, the wool is shorter and more curled and also much more silky. As with the alpaca, considerable quantities of wool were exported and sold domestically. Vicuna fur blankets were put together in very different ways and sold in large numbers to tourists. There were blankets made from the fur of the small animals, in which the fur was worked into one another like the guanaco.

The best skins are those of the "Cuellos". The long neck pieces have been put together to make them look nice, are medium smoke and therefore well suited for processing hats , collars, stoles , blankets, jackets and coats. The next quality is called Lomo, which means something like back part. This quality is ideal for bed and couch covers. The claws, called "patites", form the third quality. This is suitable for the production of trimmings, stoles and jackets. They are lighter in effect because the claw has a white inside. Blankets were also made from these scraps of vicuña skin, which were much cheaper than the first-mentioned qualities.

According to the furrier, leather preparation was still causing considerable problems in the 1960s. The pelts were stiff, and the salt solution used also decomposed the sewing threads over time. However, one was in the process of adapting the fur trim to modern possibilities. In addition to coats, stoles, jackets, hats and trimmings were also produced in large numbers. The neck parts were mainly used for coats and jackets, since the smoke of the cuellos is medium, which also allows lengthways processing . As a particularly light and comfortable inner lining, the material has been incorporated into women's and men's coats, which can be buttoned off. Due to the severe decimation of the animals, the price had risen tenfold and it was already difficult to get nice blankets in the shops in the city of La Paz .

Commons : Clothing and other products made from guanaco skin  - Collection of images, videos and audio files

Stuffed lion, masterpiece of a furrier, with a guanaco blanket as the back wall (1913)