The Animal Welfare Act (TierSchG) in Germany was enacted as a law for the purpose of “protecting the life and well-being of humans from the responsibility of humans for animals as fellow creatures” ( § 1 sentence 1 ). The principle of the Animal Welfare Act is: “Nobody may inflict pain, suffering or harm on an animal without a reasonable reason” ( Section 1, sentence 2 ).

The Animal Welfare Act is constitutionally based today on the state objective of animal welfare according to Article 20a of the Basic Law . It includes the essential regulations on keeping animals , killing animals ( slaughter ), interventions and experiments on animals as well as numerous regulations on breeding and trading in animals. The law is primarily designed in terms of administrative law , so that the keeping of farm animals is sometimes subject to permission.

§ 1 Principle: “The purpose of this law is to protect the life and well-being of humans out of the responsibility of humans for animals as fellow creatures. Nobody should inflict pain, suffering or harm on an animal without a reasonable cause. "

The "reasonable reason" in the sense of § 1 sentence 2 is a central concept of the Animal Welfare Act. Reference is made to it for example during slaughter or animal experiments . It is present "if it is to be recognized as valid, insightful and has an interest worthy of protection and if under the specific circumstances it outweighs the animal's interest in its integrity and well-being". A synonym for it can be understandable.

Sections 2 and 3 deal with the keeping and use of animals by humans and other persons.

Sections 4 - 4b deal with the killing of vertebrates - including slaughter.

Animal experiments are regulated in §§ 7 to 9.

The animal welfare officer is dealt with in Section 10 .

In § 11 to 11c breeding, sale, keeping and trade are regulated - also for experiments and with torture breeding (§ 11b).

Section 12 regulates the trade and the keeping of animals that have been harmed by acts that violate animal welfare.

Sections 13 to 13b contain other provisions for the protection of animals, in particular authorizations to issue statutory ordinances such as so-called cat protection ordinances .

Sections 14 to 16j regulate the implementation including the organization and measures of the authorities.

Sections 17 to 20a determine penalties and fines and authorize the prosecuting authorities to move in affected animals and to impose bans on keeping and caring for animals. 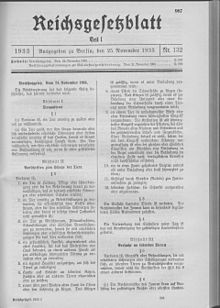 The first German animal protection law ( Reichstierschutzgesetz ) was passed on November 24, 1933. From it, essential aspects later flowed into the TierSchG. Previously, only a few criminal offenses were defined in the Reich Criminal Code of 1871. Though ideologically propagated, animal welfare was subordinated to economic goals under National Socialism .

A new attempt was made in 1972 after the public became more sensitive, among other things, through publications by Horst Stern . In May 2002, animal welfare was also included in the Basic Law to give it more weight. An amendment to the Animal Welfare Act came into force on July 13, 2013, including provisions on the guidelines for laboratory animals, the prohibition of sexual abuse ( zoophilia ), the prohibition of torture breeding and the keeping of livestock.

Animal rights activists and animal rights activists continue to criticize the Animal Welfare Act after the planned reform, saying that there is no reasonable reason for inflicting pain or even killing animals. On the face of it, the reform appears to have contributed to improvements, but more in-depth reviews have shown that the opposite is being achieved in some cases. Torture breeding for domestic and factory farming is still the order of the day, as are amputations of curly tails, beak tips or, for example, toe joints, which are carried out without anesthesia. After the ban on wild animals in circuses was planned, it was now avoided that significant suffering in the animals must be proven and there must be no other way of reducing the suffering of the animals to an "acceptable level". Furthermore, animal experiments that are carried out for educational purposes do not have to be approved by an ethics committee, as prescribed by the EU Animal Experiments Directive, only registration is required. In Berlin, for example, this affects 1.3% of all animal experiments. Animal experiments for scientific purposes and for organ removal must, however, be approved by the Animal Experiments Commission .