The Reich Criminal Code ( RStGB , long-form criminal code for the German Reich ) is the designation for the version of the German Criminal Code in the period up until it was republished by the Third Criminal Law Amendment Act of August 4, 1953 ( Federal Law Gazette 1953 I p. 735 ff.). Its proclamation took place in the German Empire on May 15, 1871 (RGBl. 1871 p. 127), came into force on January 1, 1872 and is still essentially the Criminal Code in the Federal Republic of Germany .

The RStGB divided the offenses into three classes: crime , misdemeanor and transgression ; the violations ceased to exist in the GDR on July 1, 1968 with the introduction of the GDR's penal code , and in the Federal Republic on January 1, 1975 with the major criminal law reform passed in 1969. Since then , petty offenses have been considered either a criminal offense or an administrative offense . For crimes, depending on the circumstances, the death penalty , penitentiary or imprisonment could be imposed, for offenses imprisonment and for violations usually only a fine or short term imprisonment . 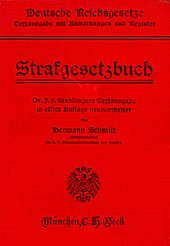 Predecessor regulations of the state of Prussia were:

The RStGB was comprehensively reformed from 1923 through the introduction of the Juvenile Court Act , the 1924 Fines Ordinance and the provisions on the dual nature of criminal law and the 1933 measures .

In the Federal Republic of Germany, the RStGB is still valid today after extensive changes. In the GDR, on the other hand, the RStGB, which had already been substantially reformed in 1958 by the Criminal Law Supplementary Act , was replaced by the GDR Criminal Code with effect from July 1, 1968 .

The Criminal Code is divided into two main sections:

General part Here the basic rules are regulated, such as:

Although extensive changes were made in subsequent reforms and numerous provisions were omitted without replacement (see below), the RStGB - now the StGB - largely continues to apply, particularly in the area of ​​crimes against life and physical integrity, as well as property crimes in the form promulgated above in 1871.

After the end of the Second World War and the fall of the Nazi regime , the penal code was amended several times. In particular, the Allied Control Council endeavored to revise regulations that were issued between 1933 and 1945 and which were shaped by National Socialist ideas. For this purpose, the Control Council Act No. 11 of January 30, 1946 and the Control Council Act No. 55 of June 20, 1947, as well as the Criminal Law Amendment Act of August 30, 1951 on the German side, were passed.

Numerous other amendments followed, some of which introduced new criminal offenses that became necessary due to changed living and economic conditions (for example computer fraud in accordance with Section 263a of the Criminal Code); many regulations of the RStGB lost their validity conversely, mainly from the XIII. Section whereby the legislature took account of changing moral concepts in society and linked penalties more closely to the violation of legal interests. The most prominent provisions of the general section as well as the rules on the determination of sentences of the Criminal Code, which were abolished after 1945, also include the abolition of the death penalty (already conditioned by Article 102 of the Basic Law ) and the abolition of prison sentences as a more severe form of prison.

Application in the GDR

The Reich Penal Code took its own development in the GDR. It was revised in 1968 and after several changes it formed the basis of negotiations in the framework of the treaty on the creation of a monetary, economic and social union between the German Democratic Republic and the Federal Republic of Germany on May 18, 1990 . In this it was stipulated that the penal code of the German Democratic Republic would be amended by repealing […] sections 90, 99, 105, 106, 108, 213, 219, 249 . As a result, a number of political acts and behaviors could no longer be prosecuted as criminal offenses. The rest of the penal code in its legal version was done with the reunification , whereby the Federal German penal code as its further development of the Reich penal code in some paragraphs (e.g. sections on preventive detention and sections 175, 182, 218 to 219 d, 236) according to annex I Chapter III Subject area C Section III No. 1 (Federal Law Gazette II No. 35, 885, 957) were not extended to the accession area, i.e. the former GDR. For example, actions carried out in the GDR that would have been punishable under the criminal law of the Federal Republic of that time (including retrospectively) were excluded from the application of the law.

The death penalty was intended as a punishment for an accomplished murder according to § 211 RStGB, for attempted murder of emperors or sovereigns according to § 80 RStGB, as well as for some state security offenses such as high treason and treason during war (war treason ). According to Section 13 of the RStGB, beheading was specified as the method of execution . In 1949, Article 102 of the Basic Law abolished the death penalty.

The unnatural fornication which is committed between persons of the male sex or between persons with animals is to be punished with imprisonment; Loss of civil rights can also be recognized. (Version from 1871)

A man who forniates another man or lets him fornicate himself will be punished with imprisonment. In the case of a party who was not yet twenty-one years old at the time of the act, the court may waive the penalty in particularly minor cases. (Version from 1935)

Section 180 of the RStGB (feed bars of fornication; so-called coupling )

Anyone who habitually or out of self-interest, through his mediation or by granting or procuring opportunity, encourages fornication is punished for pimping with prison; also the loss of civil rights and the admissibility of police supervision can be recognized. (Version from 1871)

Section 181 of the RStGB (severe coupling)

The pimping is, even if it is practiced neither habitually nor out of self-interest, punishable by penal servitude for up to five years if

1. Insidious devices are used to encourage fornication, or

2. the guilty party to the persons with whom the fornication has been committed is in the relationship of parents to children, of guardians to foster care providers, of clergymen, teachers or educators to the persons to be instructed or brought up by them.

(2) In addition to the prison sentence, the loss of civil rights is to be pronounced; the admissibility of police supervision can also be recognized. (Version from 1871)

Since 1973, in Section 180 (new version), only pimping with under 16-year-olds as promoting sexual acts by minors has been criminalized and threatened with imprisonment of up to three years or a fine. Legal guardians are only liable to prosecution if they grossly violate their duty to raise children . Coupling with under 18-year-olds is punishable by imprisonment of up to five years or a fine if it involves sexual acts in return for payment or if the young person takes advantage of a dependency associated with an education, training, care, service or employment relationship sexual acts are determined.

In addition to the prison sentence, a loss of civil rights and the admissibility of police supervision can be recognized. (Version from 1900)

Wikisource: Introductory Act to the Criminal Code for the North German Confederation  - Sources and full texts