The prison was in the 18th century a prison with aggravating conditions of detention for prisoners , because of not having the death penalty threatened crime to imprisonment were convicted. An essential part of the prison sentence was the compulsion to hard physical work , often to the point of exhaustion, for example in quarries or when cutting peat .

Rasphuis in Amsterdam, one of the earliest Dutch penitentiaries (1662) 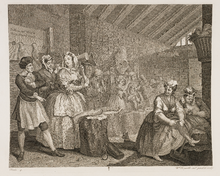 Prison sentences are a historically recent counterpart to physical and life sentences. The first penitentiary was opened in the Netherlands in the early modern period , the Rasphuis . Shortly afterwards, prisons were also built according to this concept in most German cities. The idea of ​​the penitentiary caught on in large parts of Europe. The first German penitentiaries were built in Bremen (1609), Lübeck (1613), Hamburg (1620 or 1622) and Danzig (1629).

The penitentiary was not originally used as a penal institution in the strict sense of the word, as the inmates were not primarily criminals. At that time, the prison was understood as a social institution that was supposed to "treat" people unwilling to work and bring them back into society. So were u. a. "Abandoned" women, beggars , prostitutes, and people who made money in a dishonorable but not criminal way, brought to penitentiaries. Farmers were allowed to bring farmhands and maids to the penitentiary to improve their health in order to do something about performance deficits. Hard working and prison conditions were seen as a suitable means of improving people. Admission to prison was not tied to a court order, and the length of a prison stay was mostly based on the arbitrariness of the staff. The prisoners were to stay in the penitentiary until they improved. Since there were no objective criteria for an improvement, the staff was ultimately free to decide when an improvement had taken place.

Since there was also an economic interest behind the prisons, great value was usually placed on full occupancy, so that discharges only took place when new inmates moved up. Bourgeois society found the poor to be a nuisance, with the result that institutions such as penitentiaries were introduced next to madhouses and orphanages to ban these marginalized groups from society.

In the 18th century , this development in Germany went one step further by amalgamating the various institutions for people who were banned from society. The result was an institution in which, from orphans to the mentally ill, dying people and the prison clientele, all inmates of such institutions were housed together and treated under the same conditions. However, this principle has only been implemented to a limited extent. Out of the penitentiary, the prison developed over time as a penal institution.

After the end of absolutism there was a slow movement of moderation. Gradually, a legal system was implemented and the requirements for admission to prison were tightened. So the penitentiary gradually developed into a penal institution in the true sense of the word. Crimes of different severity required different levels of punishment. In addition to the penitentiary, other types of prisons were introduced.

In the German Reich , prison sentences were regulated in the Reich Criminal Code of 1871. In 1969 it was abolished in West Germany as part of the major criminal law reform.

Paragraph 14 stipulated that life imprisonment for a criminal offense can only be determined by law, that is, if it mentioned imprisonment. Unless otherwise stipulated in a law, the maximum limit of 15 years generally applied.

During the time of National Socialism , penitentiaries were expanded to include penal camps in order to increase the prison capacity. The penitentiary penal camps also served to sharpen punishments by means of an execution full of privation. From 1936 the penal system was closely integrated into the four-year plan and served more and more military policy goals. Prisoners played an important role here, as the length of their sentences was mostly longer than that of prisoners. In this way they could be planned in the longer term. From 1940, an increasing number of arms factories were established in prisons. At the same time, the prison camps were filled with convicted Wehrmacht soldiers, as the military did not carry out their own penitentiaries. "Convicts" were excluded from military service as unworthy (from 1942 onwards, when the probation units 999 were set up, this was partially withdrawn). Soldiers sentenced to a prison sentence were supposed to do forced labor in the prison penal camps of the judiciary administration (see: Emslandlager ) under particularly cruel conditions . In September 1944, the Wehrmacht finally set up prison companies as a separate form of execution in order to use prisoners in the course of total mobilization to carry out digging work on dangerous sections of the front.

In Austria the prison sentence ceased to be effective from July 29, 1945. Colloquially, the term “prison” is still sometimes used today in Austria and southern Germany as a synonym for “prison”.

The penal code of the GDR introduced in 1968 , which replaced the Reich Penal Code , which had continued to apply in both German states, no longer recognized the term of imprisonment. Nevertheless, the traditional name was used colloquially. Well known were the prisons of Bautzen , popularly known as "Yellow Misery", Waldheim , Hoheneck and Brandenburg . With the abbreviation "Z" a prison sentence was veiled in jargon ; z. B. "three years Z". Prison sentences were considered dishonorable and also had social consequences, for example when looking for a place to live or work.

In the Federal Republic of Germany a prison sentence was accompanied by the loss of civil rights . The prison sentence was abolished as part of the major criminal law reform by the First Criminal Law Reform Act of June 25, 1969 ( Federal Law Gazette I p. 645 ). The history of the prison sentence as such came to an end in Germany with the reform of criminal law. Over the years, the “penitentiary” lost its original purpose through reform and liberalization processes and was most recently used as a penal institution for particularly serious crimes under stricter prison and security conditions. Today one speaks in principle of imprisonment , and there are penal institutions with milder and more severe penal conditions. Different institutions are selected depending on the total duration of a prison sentence. The criteria can vary depending on the country-specific regulations. In Hessen there are z. B. Mild institutions for prisoners with a sentence of less than two years and institutions with more severe conditions for prisoners with a sentence of more than two years.

Convicts
In Germany, “convict” was a slang and clearly derogatory, downright stigmatizing term for a prisoner in a penitentiary or for someone who had served a prison sentence. With the abolition of this form of prison system in Germany in 1969, the term has largely been forgotten.
Offspring
"Züchtling" is an outdated, but not quite as disparaging term as "Zuchthäusler".