A psychiatric clinic , also called a nervous clinic , formerly a sanatorium and nursing home , also called "psychiatry" for short, is a specialized hospital for the treatment of mental disorders and psychosomatic illnesses . These include psychoses , severe depression with suicidality , neurotic disorders, personality disorders , affective disorders , disorders of social behavior and mixed forms.

The term sanatorium and nursing home appears after the establishment of the German Reich in the 1870s. So z. B. in Dockenhuden, today part of Hamburg-Blankenese. The sanatorium and nursing home on the Baursberg was built there in 1879 by Heinrich Rodehorst. See z. B. Sources of the historian Volker Detlef Heydorn and the address book of Dockenhuden from 1889. Until the second half of the 19th century, psychiatric clinics were referred to as mental hospitals or insane asylums , especially colloquially as insane asylums . In 1803, Johann Christian Reil recommended the names “Pensionsanstalt für Nervenkranke” or “Hospital for psychic curative methods” for corresponding hospitals. Colloquially, derogatory terms such as Klapsmühle , Klapse , Madhouse , insane asylum , closed department or just asylum and closed are common, in Austria also Narrenhaus or Gugelhupf (after the nickname of the Viennese Narrenturm ). In a figurative sense, the term is still a synonym for chaos and organized unreason : “This is a madhouse” or “It's like a madhouse here”.

Among madmen (book illustration from 1710)

For centuries, the "fools" and "madmen" were housed and kept under inhumane conditions in penitentiaries , workhouses or madhouses. In the whole of Europe from 1650 to 1800 there was an epoch of the “exclusion of unreason”, i.e. all those who eluded the demands of the age of reason: beggars , vagabonds , unemployed , politically conspicuous, prostitutes , those afflicted with “ epidemics ” , Depressed , mentally ill and handicapped people. They were all locked in a common room with convicts without distinction. Those who stood outside the limits of reason, work and decency were banished from society.

The "madmen" were supervised by the "madmen", the "care" by so-called "disciplinarian" and by prisoners. In the past, the mentally ill were often chained up and tortured with torture tools to “bring them to their senses” or “heal their madnesses”. Nevertheless, there could be no question of “care”. Since the insane were considered insensitive to heat and cold, hunger, thirst and pain, they were left almost naked and given little food or liquid. Often the insane were put on display for a small fee, as in the London madhouse Bedlam (a corruption of the word " Bethlehem "). 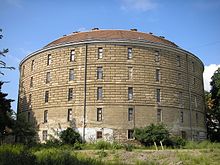 The Narrenturm in the 9th district of Vienna

The establishment of asylums and lunatic asylums was a step forward from this point of view - the excluded “lunatic” became a sick person with a legal right to medical help. The Narrenturm in Vienna's General Hospital (1784) is considered the first madhouse in the world . The Parisian doctor Philippe Pinel set standards at the beginning of the 19th century . He allegedly took off the chains of the insane and led them into the fresh air. Furthermore, he was committed to the recognition of psychiatry as a medical specialty.

In Germany, mental asylums and asylums were also set up a little later, at a time when the term did not yet have the negative sound it has today and when German psychiatrists were still fighting for recognition of their subject as an independent medical discipline. Nowadays the term “madhouse” or “asylum” is seen as pejorative and discriminatory, it is only used colloquially instead of “psychiatric clinic”.

For the role of psychiatric clinics during the Nazi era see History of Psychiatry # Scientific Psychiatry until 1945 .

In the field of psychiatry, there are in-patient facilities of the areas General Psychiatry , addiction therapy, geriatric psychiatry and forensic psychiatry with respective open treatment centers, protected / closed intensive or acute wards (psychiatric emergency treatment of self and other hazards) and (in the forensic area with high security departments forensic mentally ill Offenders), as well as day clinics, psychiatric dormitories and professionally supervised residential communities, psychiatric clinic outpatient departments and, in some cases, the outpatient psychiatric nursing service . Psychosomatic clinics are to be distinguished from psychiatric clinics. They are usually internal medicine hospitals that treat mental disorders as a contributory cause of physical illness.

The organizational and spatial separation of general hospitals, which is common in Germany, is due not only to the forms of disease treated, but also to the historically different sponsorships. The psychiatric clinics are financed by the federal states , but the general hospitals are financed by the municipalities . There are also some terms related to the respective sponsorship that initially say nothing about the therapy options or forms: regional clinic , regional hospital , district hospital . These terms, together with the place name, outline the area of ​​responsibility / catchment area of ​​the respective house, and vice versa, they are used to name the competent regional authority that maintains this house. The terms change slightly from state to state.