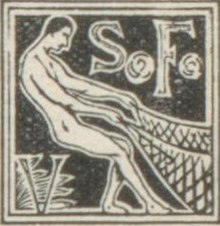 The S. Fischer Verlag is a publisher founded by Samuel Fischer in Berlin in 1886 , which soon rose to become the leading publisher of naturalism and classical modern German. In the 20th century, the publishing house became one of the most internationally visible and renowned German language houses. The authors associated with the publishing house include Alfred Döblin , Gerhart Hauptmann , Hermann Hesse , Hugo von Hofmannsthal , Thomas Mann , Arthur Schnitzler and Carl Zuckmayer . Traditionally based in Berlin-Schöneberg until 1942 , the company has now been based in Frankfurt am Main from 1948 onwards .

Advertisement by Samuel Fischer for the establishment of the publishing house in the Börsenblatt des Deutschen Buchhandels on August 31, 1886 (No. 201, p. 4674).

On September 1, 1886, the German-Jewish Samuel Fischer founded his publishing house of the same name at 49 Steglitzer Strasse in Berlin. Three years later the company moved to Bülowstrasse 90. The publisher was able to win over successful German and European authors such as Émile Zola , Fjodor Dostojewski , Tolstoy , Karl Bleibtreu and Max Kretzer for his company in the first few years . The most important Fischer authors of the early days, however, were Gerhart Hauptmann and Henrik Ibsen . S. Fischer soon made a name for itself as the leading publishing house of naturalism and in addition to Ibsen's Frau vom Meer , Gerhart Hauptmann's play Before Sunrise appeared in 1889 . Together with Ibsen's Ghosts , published at the same time , the drama premiered on the "Free Stage" . The theater association "Freie Bühne" was founded in 1889 a. a. was founded by Otto Brahm and Maximilian Harden with the aim of revolutionizing conventional bourgeois theater . With the dramas by Ibsen and Hauptmann, the association achieved two sensational premieres, which paved the way for future work.

In addition to Ibsen, the publishing house counted the Scandinavians Jacobsen , Brandes and Kielland among its authors, and the book series Nordic Library - a collection of modern stories and plays translated from Danish, Norwegian and Swedish (edited by Julius Hofforn) was intended to bring Scandinavian literature closer to the public.

Four years after publishing began, Fischer founded the weekly Freie Bühne für Modernes Leben , which already contained texts by Hermann Bahr , Thomas Mann , Julius Meier-Graefe and Arthur Schnitzler in the first years . One of the most important contributors was Hugo von Hofmannsthal , whose dramatic study Yesterday was published for the first time by S. Fischer in 1899 .
Although the magazine was initially conceived as a forum for the new naturalism trend, it remained open to all sides and soon included other literary directions in the program . In 1894 the paper was renamed Neue Deutsche Rundschau , from 1904 it was called Die Neue Rundschau and was published monthly until September 1944, then only quarterly. After Oskar Bie had headed the magazine until 1920, Rudolf Kayser took over the chairmanship and from 1932 Peter Suhrkamp .

From the beginning, the publisher published contemporary authors as well as works of world literature . Thomas Mann's first work, Der kleine Herr Friedemann, appeared in the Fischer Collection in 1898, followed by his first novel, Buddenbrooks , in 1901 . Due to the size of the work, Fischer initially had reservations about publishing it, but contrary to his expectations it became a great success on the market. Other authors of those years were Otto Erich Hartleben , Felix Hollaender and Gabriele D'Annunzio . Just before the turn of the century the house published Ellen Keys work The Century of the Child .

One of the publisher's concerns was to offer inexpensive editions of his books to a wide readership and thus to familiarize the people with sophisticated fonts. In 1901 he launched the Pantheon paperback series - a collection of classical works - which was continued between 1960 and 1964 as Exempla Classica and contained editions from Brentano to Shakespeare .

In October 1908, the publishing house began the collection of Fischer's library of contemporary novels , the titles of which were published in an initial edition of 15,000 copies. A volume of the demanding novels appeared monthly, with twelve titles making up a “series”. The annual series were put together in such a way that a few promising titles always offset the economic risk of the other volumes . In 1929 the last book in the library was published, which became very popular with the public.

The editor Moritz Heimann played an important role in the success of the house. He accompanied Fischer over three decades and tracked down new talents such as Thomas Mann, Reinhard Johannes Sorge , Wilhelm Lehmann and Oskar Loerke . At the beginning of the century Fischer devoted himself more and more to English literature and published works by Oscar Wilde , George Meredith and George Bernard Shaw . Topics at that time were mechanization, industrialization and America. The Scandinavian authors continued to be included in the program through Gustaf af Geijerstam and Bjørnstjerne Bjørnson , and on its 25th anniversary the publisher had already recorded 150 authors with a total of over 1000 titles. Complete editions were published by Hauptmann, Hofmannsthal, Dehmel and Ibsen , among others . Hermann Hesse was S. Fischer's in-house author from 1904 to 1950.

In addition to the current of naturalism, Fischer promoted expressionist literature in particular from the 1910s . In 1912 he published the first drama of its kind in Germany, Der Bettler by Reinhard Johannes Sorge, followed by works by Reinhard Goering and Hermann von Boetticher . During his entire publishing activity, Samuel Fischer was open to new directions and was able to assert himself as a constant on the literary market despite the fast-moving avant - garde .

The publishing house in the Third Reich

The Jewish publisher Fischer, as well as many of his publications, were "undesirable" for the National Socialists . 15 of the 135 titles on the black list for indexing fiction alone belonged to Fischer, and during the “Third Reich” a total of 123 titles were removed from the program.

After Samuel Fischer's death in 1934, his son-in-law and long-time employee Gottfried Bermann Fischer took over the management of the publishing house. When the owner family was forced out of Germany in 1936, Peter Suhrkamp took over the management. As an authorized board member, Suhrkamp negotiated with the managing director of the Reichsschrifttumskammer Karl Heinl about the modalities of the " Aryanization " of the publishing house, whereby a number of publishing rights and stocks were transferred to Gottfried Bermann Fischer in order to give him the opportunity to set up a new publishing house abroad . The AG became a KG in 1942 and the company was renamed Suhrkamp Verlag KG.

As a result of his emigration, Bermann Fischer founded several publishers in exile, first in Vienna , in 1938 in Stockholm and in 1940 in New York (together with FH Landshoff ). In 1948 he merged with the Querido Verlag in Amsterdam, which was shut down shortly after the publisher was acquired in 1952. Thanks to the publishing houses, especially Jewish and German emigrated writers had the opportunity to continue to publish their books.

After the end of the Second World War , there were disputes between Suhrkamp and Fischer about the future direction of the company. After an out-of-court settlement, this led to a quasi-division of S. Fischer Verlag. Bermann-Fischer got the publishing house back, Peter Suhrkamp left the Fischer publishing house and founded the Suhrkamp publishing house . The authors of the part of the Fischer Verlag that remained in Germany during National Socialism and was managed by Suhrkamp were given the choice of which publisher they would like to be published in the future. In the end, 33 of the 48 authors - including Bertolt Brecht and Hermann Hesse - decided to switch to Suhrkamp.

The publisher after the war

The first work after the war was The Trial by Franz Kafka . Since 1952, the publisher's profile has been shaped more and more by the Fischer library , which included the Fischer Lexikon , Fischer Weltgeschichte and the reference work Der Fischer Weltalmanach . In the 1950s, the house began to offer Sigmund Freud's works to a wide audience. The Anglo-Saxon authors became more and more important to the publisher, and pieces by Tennessee Williams and Arthur Miller and the individual editions of Virginia Woolf's works were published.

With the German-language edition of Doctor Schiwago , S. Fischer achieved the greatest book success ever in 1958. In the same year, the author Boris Pasternak received the Nobel Prize for Literature , which he had to refuse on the orders of the Soviet government.

In 1963 Gottfried Bermann Fischer and his wife Brigitte resigned from the publishing house, and the business gradually passed to the Georg von Holtzbrinck publishing group . In the following decades, the line of Samuel Fischer and his son-in-law was retained: authors of classical modernism and contemporary writers were published.

Three years after the resignation of Bermann Fischer, the in-house paperback publishing house was founded, to which the previous paperback program was incorporated. In 1974 Monika Schoeller (1939–2019), Georg von Holtzbrinck's daughter, took over the management of the publishing house. In October 2002 she withdrew from the operational management, but remained without the department chairman of the management. In the same year, S. Fischer Verlag took over Scherz Verlag , based in Bern.

In 2010, OW Barth Verlag , which was part of Scherz Verlag, was taken over by Droemer Knaur , which also belongs to the Holtzbrinck Group.

Publishing house in Frankfurt am Main

Today's program builds on the tradition of the house and includes German-speaking and international contemporary authors, a non-fiction area (focus: history, politics, psychology, natural and social sciences) and a section for modern classics.

Since 2016 the publisher has been publishing science fiction and fantasy literature under the imprint “ FISCHER Tor ”, often translations from the American publisher Tor Books, which belongs to the same publishing group .

In 2018, S. Fischer Verlag sued the non-profit Project Gutenberg with the help of the law firm Waldorf Frommer, which specializes in copyright issues . This American website publishes books that are in the public domain in the United States. In a judgment of the Frankfurt am Main Regional Court on February 9, 2018, it was determined that Project Gutenberg may no longer make certain pages from Germany accessible because works by the authors Heinrich Mann , Thomas Mann and Alfred Döblin, who died in 1950, 1955 and 1957, are accessible are made for which the copyright in Germany has not yet expired. Among the works cited in the lawsuit are e.g. B. Works by Heinrich Mann that are not in the current publishing program of S. Fischer Verlag, such as the works Flaubert published in 1917 and the origin of the modern novel and Der Vater or the novella Die Ehrgeizige published in 1920 .

Since Project Gutenberg is financed by donations, they do not want any further, very expensive legal disputes in the Federal Republic of Germany and as a consequence, from March 2018, they have access to all pages of the project, regardless of the national origin of an author or the seat of a possible right -Owner, blocked from this country.