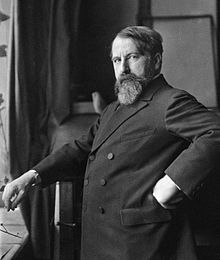 Arthur Schnitzler (born May 15, 1862 in Vienna ; † October 21, 1931 there ) was an Austrian doctor , storyteller and playwright . He is considered one of the most important representatives of Viennese modernism . 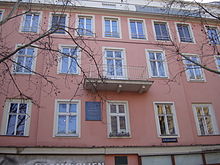 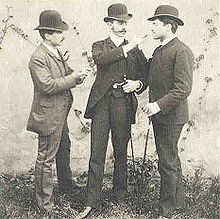 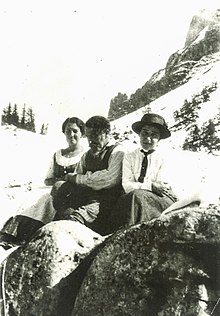 Arthur Schnitzler came as the first son of the four children of the Jewish medical professor and laryngologist Johann Schnitzler (1835-1893) and his wife Luise nee. Markbreiter (1840–1911) in Praterstrasse 16 (at that time still Jägerzeile) in the 2nd Viennese district Leopoldstadt to the world. However, as an expression of the father's successful career advancement, the family soon moved from the part of town, which is particularly known for Jewish immigration, to the 1st district.

Arthur Schnitzler began early as a writer of literary texts and poems. He made his literary debut with Liebeslied der Ballerine in 1880 in the magazine Der Freie Landbote and subsequently published poems and stories a. a. also in Blue Danube , Modern Poetry , Frankfurter Zeitung and Free Stage .

From 1885 to 1888 he worked as an assistant and secondary doctor at the General Hospital of the City of Vienna in internal medicine and in the field of psychiatry and dermatology. After that he was his father's assistant at the laryngological department of the polyclinic in Vienna until 1893 . From 1886 to 1893, Schnitzler published on medical topics and wrote more than 70 articles, mostly reviews of specialist books, including as editor of the International Clinical Review founded by his father . He wrote one (only) scientific publication: On functional aphonia and its treatment through hypnosis and suggestion (1889).

From 1890, Schnitzler and his friends Hugo von Hofmannsthal , Hermann Bahr and Richard Beer-Hofmann were one of the main representatives of the young Vienna , the literary Viennese modernism , whose preferred meeting place was the Café Griensteidl in the city center. Schnitzler also liked to visit the Leidinger restaurant at Kärntner Straße 61 and was also acquainted with Sigmund Freud . 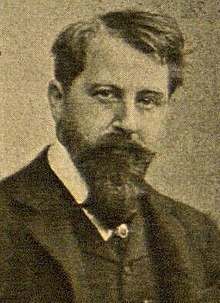 After his father's death in 1893, he left the clinic and opened his own practice, first at Burgring 1 (access via Bösendorferstraße 11 (Giselastraße 11), Top 3-4, 1st district, Innere Stadt ), then in an apartment in Mezzanine of Frankgasse 1 (9th district, Alsergrund , right next to the large Votive Church ). He had also contributed to his father's clinical atlas of laryngology, published posthumously in 1895 .

At the turn of the century he was one of the most important critics of the Austro-Hungarian k.uk society and its development. After the publication of Lieutenant Gustl , in which he attacked the code of honor of the military, on June 14, 1901 he was stripped of the officer rank as senior physician in the reserve.

After that he was no longer a doctor, but only worked as a freelance writer in Vienna.

“Women always played a central role in Arthur Schnitzler's life. In the time before his marriage ... there were relationships with actresses ... on the one hand, and love affairs with girls from the suburbs ... that also influenced his artistic work. 'The long-term relationships with Marie Glümer and Maria are of great importance to his work Reinhard . Schnitzler and Maria Reinhard's child was born in 1897 and is said to have died giving birth.

In 1910, Schnitzler acquired the villa in Vienna 18th , Sternwartestraße 71, from Hedwig Bleibtreu , in the Währinger Cottageviertel not far from the Vienna University Observatory . Friends like Richard Beer-Hofmann and Felix Salten lived nearby . He had previously lived on the next parallel street, at that time Spöttelgasse 7 (since 1918 Edmund-Weiß-Gasse).

In 1919 he met Hedy Kempny . From this a friendship developed that lasted until Schnitzler's death. In 1921 he was divorced from Olga Schnitzler, the children Heinrich and Lili stayed with him. From 1923 onwards, the widowed writer Clara Katharina Pollaczek was born. Loeb (1875–1951) Schnitzler connected in a "romantic relationship". The two exchanged extensive letters; Numerous joint visits to the cinema are also documented. While the relationship with Pollaczek became increasingly difficult in his last years, the young translator Suzanne Clauser became Schnitzler's last great love.

In 1921, on the occasion of the world premiere of the stage play Reigen , which led to a staged theater scandal in Berlin and then in Vienna in 1920/1921 , he was brought to trial for causing public nuisance, which ultimately ended in favor of the author at the Vienna Constitutional Court . After further performances in Vienna, however, Schnitzler asked his theater publisher in 1922 not to allow further performances. (His son did not have the ban lifted until 1982.)

In the period that followed, the writer increasingly isolated himself. In 1927, the Austrian Radio Verkehrs AG (RAVAG) imposed a "major radio ban" on Schnitzler, who made copyright claims for royalties .

Olga and Arthur Schnitzler allowed their seventeen-year-old daughter to marry the Italian officer Arnoldo Cappellini on June 30, 1927. 13 months later, on July 26, 1928 she committed in Venice , where she lived with her husband, suicide . Clara Pollaczek blamed Arthur Schnitzler for this. “That July day my life came to an end”, Schnitzler noted in his diary.

In the last years of his life he mainly wrote stories in which he portrayed individual fates around the turn of the century from a psychological point of view.

Arthur Schnitzler died of a cerebral haemorrhage on October 21, 1931 at the age of 69 . In a decree he had stipulated in the event of his death: “Heart stroke! No wreaths! [...] funeral last class! The money left over by following these provisions is to be used for hospital purposes. [...] Do not mourn after my death, absolutely none! "

He was buried on October 23, 1931 in the Vienna Central Cemetery in the Old Israelite Department, Gate 1. Adjacent are the younger graves of Oskar Strnad , Friedrich Torberg , Gerhard Bronner and Harry Weber . The Vienna city administration maintains the grave as an honor grave .

Schnitzler wrote dramas and prose (mainly short stories), in which he mainly focuses on the psychological processes of his characters. Simultaneously with the insight into the inner workings of Schnitzler's characters, the reader also gets a picture of the society that shapes these characters and their mental life.

The plot of the works of Schnitzler mostly takes place in Vienna at the turn of the century. Many of his stories and dramas live not least from the local color. The characters involved are typical figures of Viennese society at the time: officers and doctors, artists and journalists, actors and easy-going dandies, and last but not least, the sweet girl from the suburbs, who became something like a distinguishing mark for Schnitzler and simultaneously for his opponents a stamp with which they wanted to disqualify Schnitzler as one-sided.

Schnitzler is mostly not concerned with the representation of pathological mental states, but with the processes inside ordinary, average people with their ordinary life lies, to which a society full of unwritten prohibitions and regulations, sexual taboos and codes of honor especially challenges the weaker citizens among its citizens.

Like Sigmund Freud in psychoanalysis , Arthur Schnitzler brought up those taboos (sexuality, death) that were suppressed by bourgeois society around the same time. In contrast to Freud, the essence of this society and its participants is revealed in Schnitzler's work not as a (previously) unconscious , but as a semi-conscious, for example in the inner monologue of a protagonist. Freud himself wrote in a letter to Schnitzler:

“I have often wondered in amazement how you could get this or that secret knowledge that I acquired through laborious research into the object, and finally I came to envy the poet whom I usually admire. So I got the impression that through intuition - but actually as a result of fine self-perception - you know everything that I have uncovered in laborious work on other people. "

It was no coincidence that Schnitzler introduced the inner monologue into German-language literature with his novella Leutnant Gustl (1900) . With the help of this special perspective, he was able to give the reader a deeper, more direct insight into the inner conflicts of his characters. He continued this narrative form in Fräulein Else .

In the novel The Path to the Free and in the play Professor Bernhardi , Schnitzler dealt with the anti-Semitism that is strongly pronounced in Vienna .

At the same time he is one of the great diarists in German-language literature. From the age of seventeen to two days before his death he meticulously kept a diary . It was published posthumously in ten volumes from 1981 to 2000.

The majority of the estate, which consists of an estimated 40,000 sheets, was saved from the National Socialists by the activity of a British man living in Vienna, Eric A. Blackall, who ensured that the British representation in Vienna placed the material under diplomatic protection . The Nazi regime respected at several house searches, that it (unlike the living rooms Schnitzler) on the stored in separately accessible basement rooms of Schnitzler Villa materials legally had no access: Due to a "gift" the materials that were Cambridge University Library brought .

The problem with the "donation" was that it was made by Arthur Schnitzler's divorced wife, Olga, who was not authorized to do so. The rightful owner, the son Heinrich, was not in Vienna.

During and after the Second World War , Heinrich Schnitzler endeavored to get this intellectual legacy from his father back from Great Britain; however, he was unsuccessful. In an article in the Viennese daily Kurier on January 11, 2015 , Thomas Trenkler classified the behavior of the British authorities and Cambridge University as expropriation taking advantage of an emergency; the estate should be returned to the family. The family, the grandchildren Michael Schnitzler and Peter Schnitzler, then announced that they would reclaim the estate again.

The grave in the Central Cemetery, Old Israelite Department 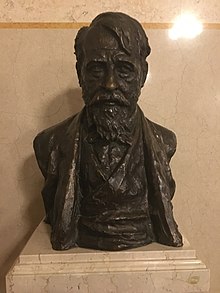 While Schnitzler was frowned upon as a Jewish author during the Nazi era, in the post-war period a slow institutionalization of the classic began.

The years refer to the conclusion of the manuscript.

Schnitzler's work served as a template for numerous cinema and television films, including:

Radio plays about his relationship with Adele Sandrock

Novels
Mrs. Bertha Garlan  | The way into the open  | Therese. Chronicle of a woman's life

Stories
What a melody | He waits for the wandering God | America | Inheritance | The prince is in the house  | My friend Ypsilon | The other | Wealth  | The three elixirs | The bride | To die  | The son  | The comedians | The little comedy  | Walk | Flowers  | Later fame  | The widower  | The sensitive | The other. From the diary of a bereaved | A farewell  | The Wise's Wife  | The day of honor  | The dead are silent  | The next  | By an hour  | A success  | Legend | Lieutenant Gustl  | The blind Geronimo and his brother  | Benefits given quietly and purely | Andreas Thameyer's last letter  | The green tie | Boxer Rebellion | The Greek dancer  | The stranger  | Eccentricity | The fate of the Baron von Leisenbohg  | The prophecy  | Evening stroll  | The new song  | The Bachelor's Death  | The dead Gabriel  | Story of a genius | The Redegonda Diary  | The killer  | The triple warning  | The shepherd's flute  | Mrs. Beate and her son  | Escape into darkness  | Doctor Gräsler, spa doctor  | The last letter from a writer | I  | Casanova's drive home  | Miss Else  | The judge's wife  | Dream novel  | Game at dawn  | Adventurer novella  | The second

Plays
The Adventure of a Lifetime | Alkandi's song | The fairy tale  | Anatole  | The overstretched person | Half past two | Flirtation  | Fair game  | Round dance. Ten dialogues  | The Legacy  | Paracelsus  | The green cockatoo  | The mate  | Beatrice's veil  | New Year's Eve  | Living hours (one-act cycle) :  Living hours , The woman with the dagger , The last masks , literature ) | The lonely way  | The puppeteer | The brave Cassian  | To the big sausage  | The Delorme House  | Interlude  | The call of life  | Countess Mizzi or The Family  Day | The Metamorphoses of Pierrot | The brave Kassian | The young Medardus  | The wide land  | Professor Bernhardi  | Comedy of words  | Finch and lilac bush  | The sisters or Casanova in Spa  | The walk to the pond  | Comedy of seduction  | In the play of the summer air | The word  | Train of shadows  | chivalry