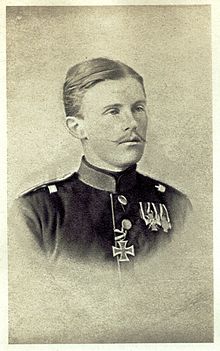 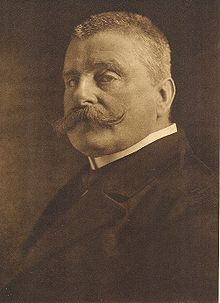 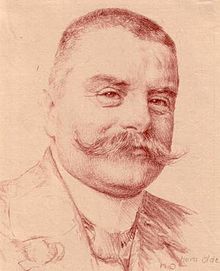 After a short military career and a few years in administration, Detlev von Liliencron turned to his passion and became a freelance writer. In 1883 his first volume of poetry was published Adjutantenritt und other poems . This was followed by a summer battle (1887), under fluttering flags (1888) and The Heath goers (1893). His poetry is an important milestone in the emerging naturalism of the late 19th century.

His father Louis was a son of the Danish war commissioner and captain Andreas von Liliencron (1774-1823) and a serf. Because of this "improper" marriage, the grandfather Andreas was disinherited from his family.

His mother Adeline was the daughter of the American captain Frederick von Harten and a Portuguese woman.

After he broke off his training at the humanistic grammar school (the Kieler scholars' school ) a year before graduating from high school, Liliencron graduated from secondary school in Erfurt and entered the Berlin cadet school in 1863 . His wish to become a cavalry officer failed due to a lack of financial resources. As a Prussian infantry officer he took part in the German War (1866) and Franco-German War (1870/71), where he received several awards, although he lost his youthful enthusiasm for war. Because of gambling and the resulting debts (from which he never got rid of later) he was forced to quit active military service, first in 1871 and then finally in 1875, with the rank of first lieutenant (first lieutenant ).

The following emigration to America , where he made his living as a piano and language teacher from 1875, did not last long. In 1877 he returned to Germany. On the initiative of his father largely rehabilitated (receiving a small military pension and allowance for the wounded), he found a job in the Prussian administration in 1878 and married Helene von Bodenhausen . However, the marriage was not a lucky star.

Beginning in 1882 Liliencron became a magistrate - a kind of deputy district administrator on the North Frisian island - local Pellworm appointed to become one of Prussia belonged. This is where his most famous poem, Trutz, blanke Hans , was written, as well as experimental, innovative verses such as Drunken . Also in that year he was promoted to captain of the Landwehr as a formerly active officer who was then assigned to the reserve . In October 1883 he was appointed parish bailiff in Kellinghusen ( Holstein ).

The bon vivant and gambler Liliencron was chronically in debt and therefore had to resign from the civil service in 1885 after his salaries were seized. In the same year his marriage to Helene von Bodenhausen was divorced.

From now on Liliencron lived as a freelance writer . He got to know the innkeeper daughter Augusta Brandt, whom he married in 1887. The publication Arbeit ennobles fell in this year . In the following year he made first contacts with the poets of the Friedrichshagener poet circle . Liliencron was also an external member of the Breslau poetry school; his friend Paul Barsch , editor of the club magazine, collected donations to buy the poet a desk. With financial support from the Schiller Foundation , Liliencron spent some time in Munich in 1890/91 , where some of his poems were published in the journal Die Gesellschaft . There he used to associate with Otto Julius Bierbaum, among other things .

In 1891 Liliencron moved to Altona-Ottensen and, after divorcing Augusta Brandt in 1892, to Palmaille , in another quarter of the then still Holstein city of Altona . He got to know Gustav Falke and soon counted him among his friends. Here, among other things, he wrote his main work Poggfred and got to know Richard Dehmel , with whom he was in lively contact.

His debts haunted him, and in 1898 he tried to make some money by doing lecture tours. Finally, in 1899, Liliencron married the farmer's daughter Anna Micheel, his third and final marriage. Due to acute financial difficulties, he joined the literary cabaret " Überbrettl " a year later .

In 1901 there was finally some calm in Liliencron's eventful life. With the help of his friends, he managed to find an apartment in Alt-Rahlstedt, and he received an annual honorary salary of 2,000 gold marks from Kaiser Wilhelm II . At the same time his fame as a poet reached a climax. On his 60th birthday in 1904 he was honored with a German and Austrian festschrift , in which the most famous writers of the time participated and which was designed by the painter and illustrator Heinrich Lefler . 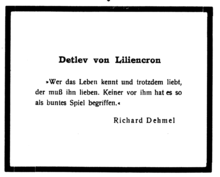 In 1908 he wrote the autobiographical novel Life and Lies . In the last year of his life, 1909, he was awarded an honorary doctorate from the University of Kiel on his 65th birthday . His last trip took him to the battlefields of the Franco-German War . Liliencron died shortly afterwards of pneumonia . His grave is in the Rahlstedt cemetery . 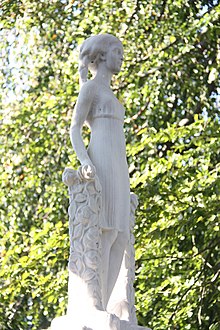 Liliencron was one of the most important poets of his time. His work is extremely varied and difficult to assign to a specific literary epoch. His poems are shaped by the tension between naturalism and neo-romanticism . The works show similarities with the "pessimistic cultural criticism " propagated by Friedrich Nietzsche . While Liliencron was insignificant as a prose author, his poetry influenced the young Rainer Maria Rilke as well as Hugo von Hofmannsthal . Although Liliencron became known to a wider audience primarily through ballads such as Trutz, blanke Hans or Pidder Lüng , those poems in particular that dealt with modern life had a significant effect on the early days of Expressionism . Liliencron's big city poems such as Broadway in New York already take up many topics that are dealt with by later expressionists. Experimental poetry in particular that as stream of consciousness designed Drunk (written in 1883, published 1893) play with the dissolution of form and already point forward to the literary modernism.

The volume of poems Adjutantenritt , published in 1883 , which also contains lyrical prose , was hailed as a new lyrical art by the naturalists who saw Liliencron as one of their own. Even with his first publications, Liliencron showed that he was a master of poetry. He uses the difficult forms and guidelines of high lyric poetry without problems. For example, he experiments with Rondeau and Ghazel . But even the first collection shows Liliencron's idiosyncratic style, which sets him apart from the classicists as well as the naturalists. Liliencron reacts more sensitively than many naturalists to modern lifestyles. He mixes the different sensory perceptions into a synesthesia and translates it into literature. Through these subjective perceptions and reflection of his inner being, he develops his personal writing style. He himself explicitly distanced himself from the naturalists with the poem The Naturalists . He demanded that poetry should include "humor and the finest artistic hand".

His debts and the problems associated with them are evident in Liliencron's work. Like the aesthetes , he had an aversion to the lifestyle of the bourgeoisie. Not least because of this inconvenience he experienced personally , he joined Nietzsche's cultural pessimism . Liliencron did not think much of most modern achievements, rather the escape from the hustle and bustle of the big city into a romanticized landscape plays a central role in many of his poems.

Memorial stone at the nature reserve