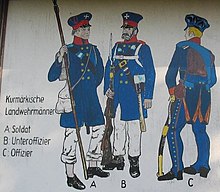 Landwehr is a military term that can have different meanings depending on the state or area. Frequently it comes to a standing army coordinate militia-like organizations or units of reservists of older vintages.

The Landwehr was a part of the army alongside the standing army . In some countries there was also the term Landmilit or Landsturm for this . From 1813 in some German states, such as Prussia , Hanover , Hesse and others, the establishment of the Landwehr was associated with the first introduction of general conscription . In other countries, however, the formation of the Landwehr was still synonymous with the drafting of volunteers (Landsturm and Freikorps, volunteer hunters) or irregular militia groups.

In 1809, based on the French model, a national guard with three classes was established (1st class: reserve battalions of the line regiments, 2nd class: Landwehr, 3rd class: civilian military ). A Bavarian peculiarity are the mountain rifle companies set up on the edge of the Alps . The National Guard was converted into the Landwehr of the Kingdom of Bavaria from 1814 to 1816 . As part of the army reform of 1868 , the name Landwehr was used for older age groups in the reserve , and for the oldest age groups the term Landsturm was used. The Landwehr and Landsturm regiments were still used during the First World War.

In the context of the Landwehr, the warrior and veteran clubs are also to be considered. These were monitored by the Bavarian military authorities until 1918.

Soldier of the Prussian Landwehr, 1815. The shako is of British origin and was marked with the white Landwehr cross.

The Lübeck Landwehr, in a departure from the usual practice, was called the Landsturm and represented the deployment of the Lübeck Citizens Guard in the rural area around the city. The other Hanseatic cities also set up irregular contingents from 1813, some with Russian and British equipment, such as the Hamburger Bürgergarde (from 1815 the Hamburg citizen military ), the Hanseatic Citizen Guard (established in Mecklenburg in 1813, with British shakos) or from October 1813 the Hanseatic Legion .

Banner of the voluntary Saxons, 1814

In Prussia , the Landwehr was introduced according to Scharnhorst's draft by ordinance of March 17, 1813. All conscripted men aged 17 to 40 who were not drafted into the regular units or who served as volunteer hunters served in it. Depending on the population density, a fixed number of conscripts was set for each area. If there were not enough volunteers, the missing number of soldiers was determined by lot. Although the land defense units were only dug up during the wars of freedom , they were on an equal footing with the regular military units. The equipment and armament of the Landwehr infantry was rather poor in the early days of 1813 to 1815, often only pikes and axes were used as weapons, and many soldiers had no shoes. The Landwehr cavalry was basically equipped with lances until 1816. The numerous infantry and cavalry regiments of the Prussian Landwehr were numbered according to their provinces of origin. The colors of the badges on the collar and sleeves of the uniform skirt, the single-row buttoned dark blue litevka , and the headgear were also based on the province and were as follows:

The armpit flaps of the Prussian Landwehr infantry regiments indicated the respective battalion by their color (I. white, II. Red, III. Yellow) and also often bore the number of the regiment.

In the Prussian Landwehr, as in the Lützow Freikorps and the German-Russian Legion , several famous poets of German Romanticism served from 1813, such as Theodor Körner , Ernst Moritz Arndt , Joseph von Eichendorff and Wilhelm Smets .

After the republican left had high hopes for the Landwehr in the unrest of 1848/1849 and even sought to democratize the Landwehr, the Landwehr was weakened in 1858 as part of a military reform, which led to the Prussian constitutional conflict.

In the Saxon Army in 1814/1815 the banner of the voluntary Saxons was erected, which, like the Landwehr in Hesse and Anhalt, wore the Landwehr cross on their headgear or uniforms . However, it was a volunteer unit. In addition, a Landwehr based on the Prussian model was set up. There was also a royal from 1814 to 1815. Saxon provisional infantry brigade (still in white Rheinbund uniform with yellow discounts ) under Prussian command, as well as a Saxon Landwehr.

In the Kingdom of Württemberg , the four terms Landwehr , Landmiliz , Landsturm or State Committee were used synonymously at the same time. Corresponding associations were sometimes only set up in peacetime, sometimes also in wartime (in the French-Dutch War (1672–1679), in the Palatinate War of Succession (1688–1697), in the coalition wars (1792–1795, 1809, 1813)) actually called up. After 1871 the regulations of the German Reich were in effect until 1918.

In the new army of the Kingdom of Hanover , which was founded at the Congress of Vienna , in addition to the seven field battalions of the line infantry and a hunter corps, numerous Landwehr infantry battalions were set up, in English uniforms and on an equal footing with regular English infantry regiments in the battles at Quatre-Bras and the battle were used at Waterloo . The Landwehr was organized in battalions named after their origin, such as Bremervörde , Celle , Hameln , Hildesheim , Hoya , Gifhorn , Goslar , Lüneburg , Nienburg , Osnabrück , Osterode , Peine , Salzgitter , Verden and others. Later, as in the other German states, part of the reserve was called the Landwehr.

In the Electorate of Hesse-Kassel , which was newly established in 1814, associations of volunteer hunters and two Landwehr infantry regiments (uniform: blue two-row Litewka, badge color yellow for the 1st, red (black) for the 2nd regiment; shako according to the Rhine Confederation pattern with cover and painted white Landwehr cross ).

In 1814 Landwehr infantry was established in the Duchy of Mecklenburg-Strelitz, which was uniformed in a single-row buttoned blue litewka with a sewn red cross on the left upper arm and a Prussian Landwehr chako.

Various volunteer units were set up from 1813, for example in the Duchy of Anhalt-Köthen in green litewka with a red or white Landwehr cross on the collar and a capital "A" on the felt shako according to the English stovepipe pattern, as well as in Prussian regiments of the Landwehr and Reserve infantry common.

On November 9, 1867, the establishment of the Landwehr was transferred to the territory of the North German Confederation , in accordance with Section 2 of the Imperial Constitution of April 16, 1871, to the entire German Empire (with the exception of Bavaria , where similar regulations applied).

In the first contingent, two exercises ( maneuvers ) of three or one week duration were to be performed annually . The 2nd contingent should move annually to an exercise that had to be completed together with the 1st contingent.

Compulsory military service ended on March 31 of the calendar year in which the conscript was 39 years old. (Until the age of 45, the conscript belonged to the Landsturm , like all serving and unserved conscripts, but this should only be called in the event of an immediate crisis. Exercises could no longer be performed in the Landsturm.) The officers of the Landwehr were mostly the Reserve officer corps (made up of the one-year volunteers ).

In the area of ​​the Imperial Navy , the Landwehr was equivalent to the sea ​​defense .

Soldiers of a Landsturm Infantry Battalion in Nuremberg (1915)

During the First World War , numerous Landwehr (Landwehr infantry brigades) and Landsturm associations (Landsturm infantry regiments and Landsturm battalions) were actively set up and deployed. The Landwehr was abolished by Article 173 of the Treaty of Versailles (1919) .

The Landwehr was re-created by Section 11 of the Defense Act of May 21, 1935. Plans from 1936 provided for a total of 21 Landwehr divisions to be set up by 1938. They should consist of participants from the First World War (up to 1900) and mainly from the disbanded border guard formations in the east of the Reich, which had lost their function due to the increasing strength of the Wehrmacht. Most of the associations comprised conscripts aged between 35 and 45 (born 1894–1904). During mobilization in 1939, the 14th Landwehr Division was the only Landwehr division to actually be set up on August 26th (it was converted into the 205th Infantry Division in December 1939 ). The other planned units were set up as third wave infantry divisions .

During the war, these divisions were only used as ground-based units due to their low combat strength. Above all, the equipment was so inadequate that due to the lack of uniforms, shoes, cookware and steel helmets, a large part of the crews were initially forced to do civil service with an appropriate armband.

In the former Austria-Hungary , the part of the armed forces that was under the joint Reich Ministry of War was called the Austro-Hungarian Army . In addition, there was the kk (imperial-royal) Austrian Landwehr and the ku (royal) Hungarian Landwehr . Both were subordinate to their own national defense ministries in Vienna and Budapest . In contrast to the German Reich, where the Landwehr was mostly made up of reservists and unmediators, the Landwehr in Austria-Hungary consisted of regular units. They were fully set up according to the budget and not partially mobile or cadre.

With Army Division 92 , the Landwehr regiments were converted into twelve Jäger regiments and four staff regiments, and the other Landwehr associations and units were dissolved.

In the Swiss Army , the Landwehr was one of the age categories that ran through all military branches and branches of service until the army classes were abolished in 1995 ( Army 95 ), alongside the exodus and the Landsturm .

From 1815 to 1848 (military regulations of 1817) the federal army consisted of cantonal contingents of the exodus and the reserve as well as land defense units that could be used by the federal government in the event of impending danger. In 1853 the army was divided into the following age groups: Exodus (22 to 30), Reserve (31 to 38) and Landwehr (39 to 44). With the introduction of general conscription in 1874, all units in Switzerland were integrated into the federal army. From 1884 the Landwehr had to do refresher courses.

Before 1961, soldiers between the ages of 37 and 48 belonged to the Landwehr, after 1961 ( Army 61 ) they were between 33 and 42 years of age. There were single-species Landwehr units, but also those that were made up of a mixture of moving out, Landwehr and Landsturm (for example, the transmission troops).

Today the name lives on in the "Landwehr" wind orchestra of the canton and city of Friborg, which was founded in 1804 and maintains the tradition (especially of uniforms).