This article deals with the volunteer association from the time of the Wars of Liberation against Napoléon I. For the Freikorps of the same name from the time immediately after the First World War, see Freikorps Lützow . 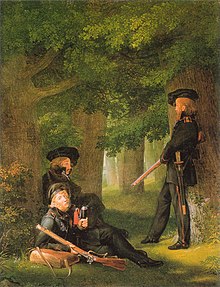 Theodor Körner reads his war songs to the Lützow hunters

“Exodus of the Jenens students into the war of freedom in 1813”, painted by the Swiss painter Ferdinand Hodler for the University of Jena in 1908 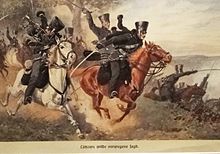 Lützow cavalry in action (in the foreground two hussars, behind them hunters on horseback)

The Lützow Freikorps was a voluntary association of the Prussian army in the Wars of Liberation . It was Major Ludwig Adolf Wilhelm von Lützow built in 1813 and 1814 as Infantry Regiment no. 25 or Lancers - Regiment Nr. 6 in the Prussian troops of the line taken. Although the Freikorps was rather unsuccessful in the war against Napoleon, due to its composition of volunteers from almost all German states it developed a high symbolic power for the efforts to establish a German national state. The German national colors black, red and gold are derived from his uniform colors (black cloth, red piping , golden buttons) .

After the catastrophic outcome of the Russian campaign for Napoleon , the forced alliance between Prussia and France was canceled in the winter of 1812/1813. Friedrich Ludwig Jahn and Friedrich Friesen , who had been promoting gymnastics and swimming in Berlin since 1810 and had founded the secret German Confederation , urged the Prussian Minister Hardenberg to collect a group of volunteers from all German states to fight Napoleon. Apparently they agreed to found such a force at the time. Because even before the king of confidential Gerhard von Scharnhorst and officially by Major von Lutzow one of this with leading to the establishment of volunteer corps was asked met Jahn and Friesen on January 29, 1813 at the meeting point Wroclaw one. There they recruited volunteers in the area and prepared everything to cope with the expected onslaught. Lützow's troop was founded in February 1813 with official approval under the name of the Royal Prussian Freikorps as a regular troop of the Prussian army. The basis for setting up this and other volunteer corps was the Highest Cabinet Order (AKO) of February 3, 1813 on the setting up of voluntary hunter detachments, from which the nickname “Lützower” or “Black Jäger” derives, although only a small part of the troop actually consisted of hunters .

Lützow only received knowledge of the armistice, which came into force on June 5, 1813, on June 9, 1813. At that time he was with around 400 infantry and cavalry at Plauen behind the enemy lines. Instead of leaving there within three days in accordance with the terms of the armistice, he hesitated and only then set his men on the march towards Leipzig . Numerous French and Württemberg cavalry under the command of General François Fournier blocked their way at Kitzen and attacked on June 17, 1813 without warning. Part of Lützow's cavalry was slain, most of the infantry escaped. Around 150 Lützowers were taken prisoner, but were not treated as prisoners of war, but rather regarded by the French as "bandits noirs". Lützow and Theodor Körner escaped with difficulty and were badly wounded. After forays into Saxony (especially in Vogtland), Thuringia and Bavaria, the troops fought their way down the Elbe in the autumn campaign of 1813 and conquered Bremen together with Cossacks . However, the Freikorps had to vacate the city immediately when French reinforcements arrived. Later it fought, mostly side by side with Cossacks, in Westphalia, Schleswig-Holstein and on the Rhine. They took part in the Battle of the Göhrde on September 16, 1813 under the Russian-German Legion of General Wallmodens . Parts of the cavalry were deployed in the Netherlands and northeastern France in early 1814. Theodor Körner was killed in a battle in Mecklenburg in August 1813, Friedrich Friesen in March 1814 in the Ardennes.

After the first abdication of Napoleon and the arrival of the Allies in Paris in 1814, the non-Prussian volunteers were dismissed and for the rest of the Free Corps Infantry Regiment no. 25 and the Lancers - . 6 Regiment formed. When Napoleon returned from exile in March 1815, these two former Lützow regiments were also mobilized again. Lützow himself was seriously wounded and captured as commander of the Uhlan regiment in the battle of Ligny on June 16, 1815. Both regiments took part in the Battle of Waterloo on June 18, 1815, which led to the final defeat of Napoleon.

The Freikorps was recruited exclusively from volunteers. In its ranks served in addition to Prussia, citizens of other German states who belonged to the Rhine Confederation (about 56 people from Franconia ) or, like the Duchy of Oldenburg and the province of Westphalia, were annexed by France. As self-sufficient and self-outfitters, the soldiers received no pay and equipped themselves. Overall, the craftsmen dominated among the volunteers, only the hunters had an above-average proportion of students.

The Freikorps owed its popularity not least to its prominent members, such as the poet Theodor Körner , who fell in 1813 and dedicated the famous song Lützow's wild hunt to the Freikorps . Carl Maria von Weber set it to music, as did Körner's sword song, which was written shortly before his death . Other famous members were the gymnast Friedrich Friesen , "gymnastics father" Jahn , Joseph von Eichendorff , an important poet of German Romanticism , and the later founder of the kindergartens Friedrich Froebel . With Eleonore Prochaska , alias Jäger August Renz , and Anna Lühring , two women known by name, disguised as men, took part in the fight of the Freikorps.

At times the Freikorps had a strength of over 3,500 men, which in 1814 was composed as follows:

The uniforms were basically black because black was the only color that could be produced by coloring the various cloth stocks in the army depots and on the market. There were also red as the badge color of the advances and gold-colored brass buttons. Musketeers, artillery and lancers wore litewkas , hussars Dolman and Mente, a jacket decorated with fur, while the riflemen wore a pike -gray uniform with light green badges based on the Austrian model. General were shako worn, only the shooters had Austrian hunting hats. The lance flags were black and red.

The black uniforms were initially continued to be worn after the takeover in the line troops and were only replaced by the regular Prussian blue uniform after Waterloo . 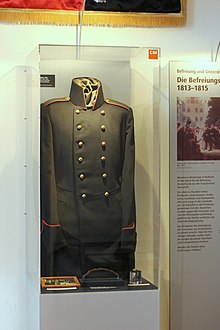 Uniform exhibited in the memorial for the freedom movements in German history in Rastatt.

The Lützow Freikorps took part in numerous skirmishes and battles, but was largely unsuccessful militarily according to Heinrich von Treitschke's assessment . In fact, the Lutzow had the largest desertion rate in the Prussian army: from infantry volunteers committed 24.4 percent desertion from the Volunteer Cavalry 8.5 percent, while the hunter Infantry 1.1 percent in the Hunter Cavalry 5.7 Percent. The average desertion rate in the Lützow Freikorps was 15.6 percent.

Rudolf Ibbeken writes: “The reasons for these relatively high rates are obvious and are proof of the dynastic-authoritarian forces at that time. First and foremost, volunteers from non-Prussian areas left the flag on the forays of the corps. Here the discipline was particularly threatened by the freedom of movement. The high percentage of desertions of 5.7% in an elite force like the cavalry hunters may also be surprising. In all this, the very varied composition of the corps asserted itself. An unambiguously Prussian corps spirit could not develop [...] Above all, the strict military school of the former soldiers, corporations and NCOs did not seem to have prevailed against the 'individualism' of the Lützower to the same degree as in the main movement [of the volunteers ]. "

In view of the rather unspectacular missions of the Freikorps, its members soon spoiled Körner's patriotic song as a "silent, embarrassed hunt".

Regardless of this, the Freikorps had an enormous propaganda effect: Volunteers from almost all German areas met and recruited more volunteers from their home countries for this or another association. The black color of the uniform, which was quite unusual at the time, together with its risky and loss-making undertakings and the famous members, who themselves were again doing propaganda, quickly led to the emergence of a myth that mobilized further forces in the form of donations and support from the civilian population. After the victory over Napoleon's France, the Lützow Freikorps became an icon and the actual nucleus of the growing national movement which, after independence, also strove for the unification of the Germans.

The uniform colors of the Freikorps became legendary. After the war, some of its members continued to wear this uniform when they continued their studies at the University of Jena . In 1815, in this uniform, they also founded the new, all-German-oriented Urburschenschaft . From 1815 the colors black-red and then black-red-gold became the colors of the fraternity movement and spread from university to university as a symbol of the desire for unity and freedom. Veterans of the Freikorps therefore also took part in the Wartburg Festival in 1817 .

The history of the Lützow Freikorps served as a template for several period films: