Flag of the Grand Duchy of Oldenburg from 1871 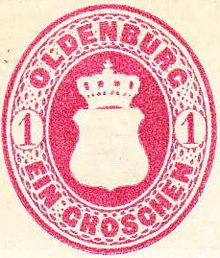 Historic postage stamp of the State of Oldenburg

Oldenburg is a historical territory in northwest Germany; The capital was Oldenburg . The area acquired its statehood in the High Middle Ages . As an independent area, it survived the Napoleonic wars , was part of the German Confederation and became a member of the German Empire in 1871 (until 1946).

The Oldenburg state was at times associated with numerous far-off enclaves . Furthermore, the country was ruled for a long time by Danish governors. In the narrower sense, the older, northern part of the Grand Duchy, especially the area of ​​the old county of Oldenburg, is called Oldenburger Land . The southern part of the country that was added in 1803 is called Oldenburger Münsterland . In addition, there was the land dignity east of the Weser . In no case, the term Oldenburger Land does not include the exclaves that belonged to Oldenburg until 1937, i.e. the Oldenburg Principality of Lübeck since 1773 (later the Eutin district in today's Ostholstein ) and the Oldenburg Principality of Birkenfeld (in the Nahe area ) since 1817 .

Oldenburg was a county in the Holy Roman Empire that developed around the Oldenburg settlement, first mentioned in 1108, and was able to gain larger areas in the course of history. The Oldenburg counts came from a Frisian princely house. Initially still vassals of the Saxon Guelph Prince Henry the Lion , they used his disempowerment by Emperor Barbarossa for independence. The first Oldenburgs belonged to the Rüstringer Frisians. In 1234 the land of the also Frisian Stedinger was acquired, later further Frisian areas (Butjadingen, Rüstringen, Wurden) and finally in 1575 the rule of Jever by inheritance . Oldenburg gained importance when Count Dietrich von Oldenburg († 1440) a daughter of Gerhard VI. von Schleswig-Holstein-Rendsburg married. Dietrich's younger son continued the Earl of Oldenburg line, which went out in 1667. Dietrich's older son Christian was elected King of Denmark as Christian I in 1448 and sovereign of the duchies of Schleswig and Holstein in 1460 . 1667 inherited this line also Oldenburg, which was thus connected in personal union with the crown of Denmark. The Lords of Jever and Kniphausen were not affected. The rule Jever came in his will to the Principality of Anhalt-Zerbst and fell in 1795 as a so-called Kunkellehen to the Russian Empress Catherine the Great .

In the Treaty of Tsarskoe Selo on August 27, 1773 , the county of Oldenburg came to the head of the House of Schleswig-Holstein-Gottorf , the later Tsar Paul , who ceded the land four days later to his cousin Friedrich August , the Prince-Bishop of Lübeck, through an exchange of countries . who was then raised to the status of duke by Emperor Joseph II in 1774/1777. The duchy thus consisted of two spatially separate areas: Oldenburg itself and the Lübeck bishopric with the residential town of Eutin . Friedrich August died in 1785. His nephew Peter Friedrich Ludwig took over as coadjutor succession and official business for the mentally weak biological son Peter Friedrich Wilhelm . Under him, Oldenburg became a royal seat again. 1803 Oldenburg gained in Reichsdeputationshauptschluss in exchange for the Elsflether Weser inches as compensation the Hanover office Wildeshausen and from the dissolved Bishopric Munster the offices Vechta and Cloppenburg . The Lübeck bishopric was converted into a hereditary principality. Although the country had joined the Confederation of the Rhine , Napoleon Bonaparte added it to France in 1810. The duke emigrated to Russia to live with his son Georg, who was married to the tsar's daughter ( Katharina Pawlowna ).

After the fall of Napoleon, the duke returned to his country in 1814. At the Congress of Vienna in 1815 the elevation to the Grand Duchy followed . In addition, Oldenburg received the Principality of Birkenfeld an der Nahe as a further exclave , so that the national territory now comprised three parts. 1818 Oldenburg was given dominion Jever by Tsarist Russia Alexander I returned. After the death of Peter Friedrich Ludwig in 1829, his son Paul Friedrich August took over the government and called himself Grand Duke for the first time . In the course of the German Revolution , the Basic Law , the first Oldenburg constitution, came into force on February 28, 1849 . It was revised again in 1852. In 1853 Nikolaus Friedrich Peter became Grand Duke of Oldenburg. Under his government in 1854 the rule In- and Kniphausen was reacquired. In the same year Oldenburg joined the German Customs Union and in 1867 the North German Confederation . In the German-Danish War of 1864, Oldenburg remained neutral. In the German War of 1866, Oldenburg troops fought on the side of Prussia against Austria . Also on the Prussian side, the Oldenburg military took part in the Franco-Prussian War of 1870/1871. After 47 years of reign, Nikolaus Friedrich Peter died in 1900. He was followed by his son Friedrich August .

Oldenburg State Ministry, seat of the District President from 1946 to 2004

After the First World War and the abdication of Grand Duke Friedrich August, Oldenburg became a republic. As the Free State of Oldenburg , it remained a state of the German Empire. But democracy only lasted for a short time. As early as the 1931 state elections, the NSDAP became the strongest parliamentary group and in 1932 placed the prime minister in a coalition government. In the following years, the Free State has been brought into line . With the ordinance No. 46 of the British military government of 23 August 1946 "regarding the dissolution of the provinces of the former Prussia in the British zone and their re-establishment as independent states", the state of Oldenburg was incorporated into the state of Hanover as the administrative district of Oldenburg .

In a referendum in 1956 and on January 19, 1975, the citizens voted against Oldenburg remaining in the state of Lower Saxony and in favor of independence. However , with the law of January 9, 1976, the Bundestag refused to restore the state of Oldenburg.

The area of ​​the former state of Oldenburg is currently divided into five federal states:

Coat of arms and national colors

In the 19th century the following coat of arms was used : A shield divided across the top, split at the top and split at the bottom by an ascending point. In the first field there are two red crossbars in gold (Oldenburg), in the second in blue a floating golden cross (Delmenhorst), in the third in the blue field a floating golden cross covered with a bishop's hat (Principality of Lübeck), in the fourth a red and white box Field (birch field), at the top in the blue field a golden crowned lion (Jever).

The national colors were blue and red, the flag blue with a red cross.