This article deals with the county of Oldenburg; on Oldenburg as a country with historically different forms of rule, see the overview article Oldenburg (country) .

The county Oldenburg ( lat. Oldenburgensis or Oldenburgicus Comitatus ) was a territory in the Holy Roman Empire , which since 1500, the Lower Rhenish-Westphalian Circle and since 1653 the Westphalian Count Quorum of the Reichstag belonged. 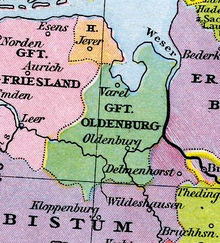 The county of Oldenburg in 1500

The county developed around the Oldenburg settlement, first mentioned in 1108 . The origin of the Oldenburg counts is uncertain due to the limited sources. The (presumably legendary) ancestor Huno is referred to as "Count von Rüstringen ", but this does not necessarily indicate a Frisian origin .

The first historically secured Count Egilmar I could have come from the north of Osnabrück and therefore of Saxon origin . In the course of history, the counts were able to gain larger areas. After the battle of Altenesch , the Oldenburgs acquired the land of the also Frisian Stedinger in 1234 , later several Frisian areas (Butjadingen, Rüstringen, Wurden). At first they were still vassals of the Saxon Guelph Prince Henry the Lion and used his disempowerment by Emperor Barbarossa for independence.

The house of Oldenburg gained greater importance when Count Dietrich von Oldenburg († 1440) was a daughter of Gerhard VI. von Schleswig-Holstein-Rendsburg married. Dietrich's younger son continued the Earl of Oldenburg line, which went out in 1667. Dietrich's older son Christian was elected King of Denmark as Christian I in 1448 and sovereign of the duchies of Schleswig and Holstein in 1460 . After the Battle of the Hartwarder Landwehr in 1514, the county doubled its territory and population by bringing Stadland and Butjadingen under their control. In 1575 the House of Oldenburg inherited the Jever rule . In the 16th century, the county became Lutheran in the course of the Reformation , with the exception of the imperial rule Kniphausen (a rule near Accum , on today's outskirts of Wilhelmshaven ), which was reformed .

In 1647 the County of Delmenhorst , originally the seat of a branch line, was reassigned to the County of Oldenburg. In 1667, after Count Anton Günther died without any descendants entitled to succeed in the county, Oldenburg inherited this line as well, which was thus linked in personal union with the Crown of Denmark and carried the Danish flag . Administratively, the territory was administered by the German Chancellery in Copenhagen . Anton I von Aldenburg , an illegitimate son of Count Anton Günther, was appointed governor . However, Jever and Kniphausen were not affected. The rule of Jever fell on the basis of his will to the heir of his sister Magdalene, who died in 1657, Prince Johann VI. von Anhalt-Zerbst , and came into the possession of Tsarina Katharina II , a born princess of Anhalt-Zerbst , as a " Kunkellehen " during the division of Zerbst in 1795 .

Independence and promotion to the imperial prince rank

After the change of country in the Gottorf house through the Treaty of Tsarskoje Selo in 1773 (the remaining possessions of the Gottorf house in Holstein went to Denmark, while Oldenburg and Delmenhorst went to the younger line of the Gottorf family), the county, ruled by Danish governors, became an emperor in 1774 Joseph II. in the imperial Prince collected and from now on as Duchy of Oldenburg called.