Lower Rhine-Westphalian Empire in the middle of the 16th century

The district encompassed the territories between the Weser and the later border with the Netherlands to the Meuse and south to the Ahr and Sieg. To the right of the Weser were only the bishopric of Verden and the county of Schaumburg . However, within the boundaries of the district there were also areas that belonged to the Kurrheinische Kreis . This applies in particular to Kurköln with the associated parts Vest Recklinghausen and Duchy of Westphalia . In 1548, the bishopric of Utrecht and the duchy of Geldern were given to the Burgundian Empire by the Burgundian Treaty . The bishopric of Cambrai became French in 1678 and thus left the empire and the imperial circle. 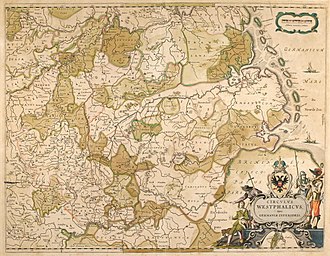 Wested map of the Lower Rhine-Westphalian Empire by Joan Blaeu in 1640, i.e. before the changes brought about by the Peace of Westphalia 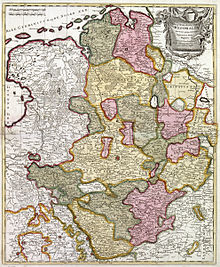 Map of Westphalia by Peter Schenk the Elder around 1710

In 1512, the Reichskreis comprised a total of 55 district estates, whose representatives formed the district assemblies. These were rarely convened and then mostly took place in Cologne . The office and the district archive were located in Düsseldorf . In 1555 the Duke of Jülich-Kleve-Berg took over the district supreme office within the scope of the Reich Execution Code . The prince who wrote the district, later called the district director, was initially also the Duke of Jülich. The office passed to the Prince-Bishop of Münster at the beginning of the 17th century . After the Jülich-Klevischen succession dispute , the office was divided. In addition to Münster, the House of Pfalz-Neuburg (for Jülich) and Brandenburg (for Kleve) alternated.

The counts and lords of the region had been united in the Lower Rhine-Westphalian Imperial Count College since 1653 .

The Reichskreis had the right to present assessors for the Reichskammergericht . As a result of the religious division of the group, the Protestant and Catholic halves each provided two assessors in the 17th century.

The district estates pursued a more or less closed policy in 1534 to secure the peace in the fight against the Anabaptist Empire of Munster . From 1556 the district tried to standardize the coinage in connection with the imperial coinage system . Overall, the Reichskreis was most active in the 16th century when, among other things, it was necessary to raise the Turkish tax . In the following centuries the importance decreased.

The border situation with the Netherlands was problematic. The Eighty Years' War between the independence movement and Spain occasionally spread to areas in the imperial circle, for example in the Spanish winter of 1598/1599 . This is one of the reasons why the district sought armed neutrality during the Truchsessian War .

Foreign forces exerted a strong influence on the Reichskreis. Kurköln was a protective power of the north-west German Hochstifte . For a long time the House of Wittelsbach occupied important episcopal seats. Hesse, the Electoral Palatinate and the Guelph duchies continued to exert influence in the north. As a result of changes in ownership in some territories, with Braunschweig and Brandenburg, foreign rulers gained in importance from the end of the 16th century. In contrast, the Reichskreis remained largely remote from the emperor.

Denominational differences also intensified. In addition to Catholic areas, there were also Reformed and Lutheran territories. Various areas were disputed in the process of confessionalization . Overall, denominational differences and the different interests, especially the self-interests of the larger territories, made it difficult for the district to find a common line.

Foreign interests weakened the common coin policy. The non-armed district estates were disadvantaged by the existence of standing armies in the larger territories. The Lower Rhine-Westphalian Reichskreis is partly counted as part of the district association of the Frontier Reichskreis . This had formed against the expansion policy of Louis XIV . A district assembly held in Cologne in 1697 could not change that. After 1702, the district therefore only made about 2,000 men available for the Imperial Army . In the 18th century the district was mostly represented by the three directors and no longer played an independent role. District meetings were not held between 1738 and 1757. In 1789 the Reichskreis was given the task of executing the Reich against the Liège Revolution .

After all areas on the left bank of the Rhine were ceded to France , the Reichskreis was dissolved in 1806.

The following are the members of the imperial circle are listed, starting from the Reichsmatrikel the year 1521 and a collection of 1532. Until Outbound towards the end of the empire imperial estates are in italics printed, newly added listed separately.

Territories that did not belong to the Lower Rhine-Westphalian Empire and were wholly or partially enclosed by the district:

The following important information is missing from this article or section:
In the article, further aspects of the Imperial Circle must be presented, see Wikipedia: WikiProjekt early modern times / Imperial circles
Help Wikipedia by researching and pasting it .

Wikisource: Print from 1532 and digitization of a directory of the imperial districts and the associated territories with details of the troops to be deployed for Turkish aid  - sources and full texts