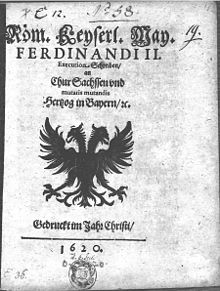 Execution letter from Emperor Ferdinand II to Elector Georg of Saxony and Duke Maximilian I of Bavaria for the military overthrow of the Bohemian Estates government and King Friedrich V , printed in 1620

The Reich execution is a means by which a confederation or federal state encourages its member states to fulfill their obligations. What is definitely meant is a military measure.

In German history, all confederations and federal states provided this means. Historically there are different names for it:

In the Holy Roman Empire, until 1806, the execution of the Reich was a measure associated with military force to enforce decisions of the Reichstag , imperial orders or judgments of the Reich Chamber of Commerce .

Since the emperor himself lacked the necessary means of power, one or more imperial princes were usually commissioned with the execution. If necessary, troops of the imperial districts were deployed according to the imperial execution order of 1555. The Grumbachian Handel was ended by an imperial execution commissioned by the Emperor and carried out by Elector August . The thaler on the capture of Gotha is an important historical document of the Grumbachian Handel, considered the last breach of the peace.

After the March Revolution

As part of the German Revolution of 1848/1849 , the Frankfurt National Assembly was created as a parliament and the provisional central power as the government of a new German Empire . The Central Power Act did not provide for an execution of the Reich, but the central power acted accordingly. On January 8, 1849, the Frankfurt National Assembly passed a law that was promulgated twelve days later that provided for the repeal of all German casinos on May 1, 1849, including the Bad Homburg casino . The government of the Landgraviate of Hessen-Homburg demanded compensation for the casino leaseholder and the state treasury, but could not enforce this demand. On March 9, 1849, Hessen-Homburg formally protested against the law. The provisional central authority then sent Reichskommissar Theodor Friedrich Knyn with 700 executing troops to Homburg on May 7th to carry out the Reich execution. This only realm execution by the Provisional Central Power petered out in its effect.

The Frankfurt constitution of March 28, 1849 provided for an execution of the Reich, which was modeled on the execution in the German Confederation. The same applies to the Erfurt Union Constitution .

Reich execution in the German Empire and the Weimar Republic

Reich execution against Saxony. The Reichswehr seals off a street in Freiberg with a fallen bayonet.

In the Weimar Constitution of 1919, the execution of the Reich was regulated by Article 48, Paragraph 1. The drug came into play for the first time in 1919 when the Munich Soviet Republic was suppressed. The events of "German October" showed the second application: In autumn 1923, the measure of the Reich execution against the states of Saxony (October 29) and Thuringia (November 6) was applied by an emergency decree by Reich President Friedrich Ebert ( SPD ) to overthrow the left coalition governments made up of social democrats and communists there . The Reichswehr marched in. Chancellor Gustav Stresemann was overthrown in Berlin by a vote of no confidence by the SPD. The Prussian strike in 1932 to depose the SPD-led state government of Prussia meant another Reich execution.

The constitutionality of the respective measures is still controversial today. A state of emergency under Art. 48 WRV could only be justified by the threat to the constitution itself - however, democratically elected governments were deposed in Saxony, Thuringia and Prussia, which were at no time in open rebellion against the Weimar constitution. It is true that the KPD in both countries had thoughts of rebellion, but the government was ousted long before any insurrection or its announcement. On the contrary: only the Reich execution led to the appeal of the KPD, which, however, found no support and ultimately did not pose a threat.