Universal lexicon of the present and the past

The Universal Lexicon of the Present and Past is an encyclopedic conversation lexicon by Heinrich August Pierer (1794–1850); it is considered "the first fully formed modern general lexicon" (Gurst 1976).

Less well known than the three well-known encyclopedias of the 19th century -  Brockhaus , Meyers Encyclopedia and Herders Conversations-Lexikon  - is the universal lexicon of present and past of Henry A. Pierer ( Universal Lexicon of past and present or latest encyclopädisches Dictionary of the Sciences, Arts and Crafts or in short: Pierer's Encyclopedic Dictionary ).

It was first published in 26 volumes between 1824 and 1836 and was continued by Julius Löbe after Pierer's death ; Over 220 employees were involved in the creation of the second edition, and over 300 in later editions. 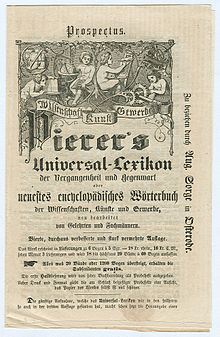 4-page prospectus from 1856 for the 4th edition, distribution: August Sorge

Pierer published several updated new editions at short intervals: 1840–1846 (2nd edition in 34 volumes; total approx. 17,000 pages), 1849–1852 (3rd edition in 17 volumes). Löbe initiated a fundamental revision, which appeared in 1857–1865 (4th edition in 19 volumes). Another followed in 1867–1873 (5th edition); Löbe was no longer involved in the following edition from 1875–1880 (6th edition in 18 volumes, published by Adam Spaarmann, Oberhausen and Leipzig, and later by the Baruch Literary Institute, Cologne, and then by JW Spemann, Stuttgart). The 7th edition (in 12 volumes) was edited by Joseph Kürschner and shows the translations (only of the term) in 12 languages ​​for each keyword.

See also : History and Development of the Encyclopedia

In the preliminary remark in the 1st volume of the 7th edition of Pierer's Konversations-Lexikon from 1888, the work is distinguished from other works:

“The often emphasized advantage of the ' Pierer ': not just being guided by the most general needs, daily interests and the particular currents dominating the present, but striving for a nice uniformity in all areas, has also been preserved in this new edition . The 'Pierer' treats at least the same number of things, terms, people, etc. from recent and recent times as any other such work, but at the same time stores the greatest possible amount of knowledge from the past in order to meet the most diverse needs and to give every user the opportunity to find their way around all saddles. [...] Classified in the general alphabet of the conversation lexicon, mostly in direct connection with its articles, the user finds the translation of the German word into two dead and ten living languages. [...] The eminent advantage of the 'universal language lexicon' is obvious. It emerges all the more advantageous in the Pierer, as this lexicon, through the hitherto unknown and unimagined extension, makes the sentence generally applied to conversation lexicons, that they replace an entire library, 'in the full sense of the word. " 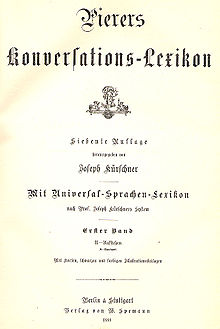 Although the work is largely forgotten today, it was highly valued by contemporaries; Contemporary critics wrote that Pierer's work was "the richest conversation lexicon, which the facts with a completeness that can be expected, and therefore an extremely useful reference manual for everyone" (Gustav Schwab and Karl Klüpfel).

Pierer's Universal Lexicon served as a model for the great conversation lexicon for the educated classes (1840–1855). Pierer complained in 1848 that Joseph Meyer had

"Replicated in the whole system of our factory [...] by using our plan, our register, he saved himself the most laborious and difficult part of the system."

- from: Foreword to the 2nd edition

Karl May and Arno Schmidt made extensive use of Pierer's Universal Lexicon as a source of information. Karl May's “foreign language skills” can be traced back to the language articles, among other things.

Complete digital edition of the work

A digital complete edition of the 4th edition (1857-1865) was published as a DVD-ROM by Directmedia Publishing GmbH, Berlin under ISBN 3-89853-515-0 as volume 115 of the digital library . This includes a facsimile representation of the original edition and enables full-text research.

The full edition is also available on the zeno.org platform.

Wikisource: Universal encyclopedia of the present and the past  - digital copies on the Internet