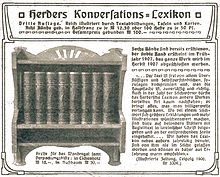 Advertisement from 1906 for the 3rd edition of eight volumes (with wall shelves in oak or walnut). At that time, this note was attached to other books by the publisher.

Herders Conversations-Lexikon (in short: Herder Lexicon ) is a 1854 by the two sons Raphael and Benjamin of the publishing founder Bartholomew Herder (1774-1839), edited encyclopedia .

Herder Verlag in Freiburg (Breisgau) published between 1825 and 1827 under the title Systematic Picture Gallery for the General German Real Encyclopedia, the first picture supplement to a conversation lexicon; it contains around 4,000 illustrations. For comparison: The Brockhaus' Conversations-Lexikon was illustrated only six decades later: from the 13th edition (1882–1887) with plates and from the 14th edition (1892–1897) also in the text.

Herder's Conversations-Lexikon was published between 1854 and 1857 in Freiburg im Breisgau by Herder Verlag with a volume of five volumes and around 35,500 main headwords. It was the fourth major conversation lexicon of the 19th century , alongside Brockhaus , Meyer's Konversationslexikon and Pierer's Universal Lexicon of the Present and Past . It was printed in an edition of 10,000 copies - unheard of for a lexicon of this size at the time - which was followed by several reprints.

The editor was the classical philologist, historian and writer Johannes Bumüller . Herder's Conversations-Lexikon was committed to the political Catholicism movement that emerged after the confusion in Cologne , which not only produced the Pius Associations for Religious Freedom and the General Assemblies of the Catholic Association of Germany , but also numerous initiatives to address the educational deficit of Catholics in Germany and Switzerland to catch up with the Protestants.

The second edition of Herder's Conversations-Lexikon appeared in four volumes from 1875 to 1879. The editorial team was headed by Johannes Bumüller and the theologian and educator Cornelius Krieg .

The completely revised third edition of the Herderschen Verlagshandlung zu Freiburg im Breisgau , comprising eight volumes, was published between 1902 and 1907 as Herder's Konversations-Lexikon (spelling changed as a result of the 1901 Orthographic Conference ). It was updated by three supplementary volumes published by 1922 (= volumes IX to XI of the complete works ). The editor-in-chief was the historian Franz Meister (1847–1933). The lexicon was advertised around 1911 with the advantages of "handiness, cheapness, completeness and reliability".

Herder's Konversations-Lexikon was continued in the Konversationslexikon Der Große Herder , which was published until the late 1960s.