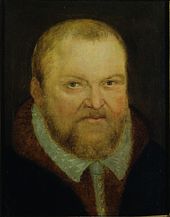 August (born July 31, 1526 in Freiberg ; † February 11, 1586 in Dresden ), who called himself Augustus and, with reference to his paternal position, was popularly called Father August , was Elector of Saxony from 1553 until his death Albertine line of the House of Wettin . He succeeded his brother Moritz, who died without a male heir in the battle of Sievershausen , to the throne.

August was first educated by the Rochlitz pastor Martin Oberdörffer. He later grew up at the imperial court in Innsbruck , where he became a close friend of the future emperor Maximilian II , and was trained by the school reformer Johannes Rivius , among others . Unlike in the father's will, August initially did not receive any territories from his older brother Moritz, but only financial grants, and in 1544 he was given the management of the diocese of Merseburg .

On the occasion of his first marriage, August was given his own court in Dresden, with Wolkenstein Castle as a hunting and country residence. Moritz had entrusted his brother with the defense of Dresden as early as 1546 and given him his own troop command. In 1552 Moritz transferred the reign to his brother, who immediately sought an alliance with his father-in-law, the Danish king. 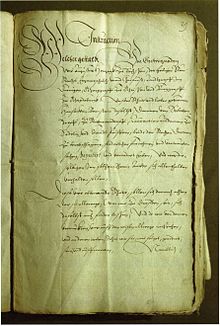 After the death of his brother Moritz, August 1553 became Elector of Saxony. August's full title can be found in a Bible from 1576: "Augustus Duke of Saxony / of the Holy Roman Empire Archmarshal and Elector /  Landgraff in Döringen /  Marggraff in Meissen / and Burggraff in Magdeburg ".

August wisely expanded the territorial state created by Moritz politically and militarily, but in 1554 in the Naumburg Treaty he renounced a large part of his territory in favor of the Ernestine line of the Wettins . In addition to the offices of Altenburg , Eisenberg , Herbesleben and Sachsenburg , this included almost all of Thuringia . But August acquired domains worth more than 700,000 guilders by barter and purchase until 1567, which he combined to form new offices .

In 1555 August was elected Colonel of the Upper Saxon Imperial Circle . Under his rule, the diocese of Meißen was secularized and the monastery territory was integrated into the Saxon electoral state in 1559 ( Stolpen and Bischofswerda ) and 1581 ( Mügeln ).

During the so-called Grumbachian Handel in 1567, August was able to conquer Gotha, capture the outlawed Ernestine Johann Friedrich II , and in this way acquire several Thuringian offices.

The thaler for the capture of Gotha (1567) , which the elector had minted with a demonstratively large Kurschild after his victory, bears an inscription on the reverse about the execution of the empire commissioned by the emperor and carried out by August.

Through the guardianship of the children of Johann Wilhelm von Sachsen-Weimar and the profit of the Vogtland and part of the county of Henneberg , August posted further enormous territorial gains.

In the empire he was the leader of the Lutheran estates . August initiated and signed the concord formula of 1577 and the concord book of 1580 and, as guardian, also carried out the signatures for the dukes Friedrich Wilhelm I of Saxe-Weimar , Johann III. von Sachsen-Weimar , Johann Casimir von Sachsen-Coburg and Johann Ernst von Sachsen-Eisenach . Successfully he was concerned with a compromise with the Catholic emperors from the House of Habsburg , with whom he made a joint front against the Calvinists .

August died in Dresden in 1586 and was buried in Freiberg Cathedral .

August was one of the few European princes who managed to save up an extensive state treasure in the 16th century . He owed this to the efforts of his chamber master Hans Harrer , even if he made massive speculations in the pepper trade to the detriment of the electoral casket and then committed suicide. Albertine Saxony experienced an economic and social boom under his government (1553–1586). Domestically, he tried to make himself largely independent of the Saxon estates . He expanded the sovereign administrative structures and reorganized the judiciary. In 1559 the Court of Appeal , based in Dresden, was created as a second instance. With the constitution of 1572 , the most extensive Saxon code of law to date was passed. The constitution had the character of the legislation on disputes. It was now available to every subject of the Electorate of Saxony, e.g. B. Bauern, free to turn to the appellate court in Dresden with the help of an attorney in civil court matters if one did not agree with the court judgment from the first instance.

In the course of his extensive reforms, he also reorganized the coinage system. The elector had all state coins closed and transferred them to a single coin in Dresden, in the immediate vicinity of his residence palace , in order to be able to better monitor the correctness of the shot and grain . The state main mint in Freiberg had to cease operations in 1556 despite protests from the Freiberg council. In 1557, the elector moved the Annaberg mint to the local monastery, before merging it with the Dresden mint in 1558. The Schneeberg mint was in operation until 1571. The elector closed the Leipzig mint , which had been inactive for a long time , in 1571. This made the Dresden Mint the only mint in the Electorate of Saxony.

August promoted agriculture and laid the foundation stone for the art and scientific collections of the Dresden court with the Kunstkammer, founded in 1560 . Scientifically educated, he was particularly interested in astronomy, cartography, mathematics, the art of measuring, and also collected astrological prophecies. To this end, he maintained various personal and correspondence contacts with scholars. The most important German bookbinder of the Renaissance, Jakob Krause, worked for him as court bookbinder from 1566 to 1586 . The catalog of the court library on the Annaburg contains 1,722 volumes. It is considered to be the oldest documented catalog of today's SLUB Dresden.

He put the management of the forests through the Forest and Wood Regulations of September 6, 1560, to make a profit. His forest officials also benefited from this order; they had a special financial interest in selling wood, leasing trees for resin , limiting the movement of cattle in the forests and using hatwood .

Elector August was probably the most important builder of the Saxon Renaissance . There is evidence of his great interest in questions of construction and architecture . His library contained many architectural writings and sample books of building elements. His main work is the huge Augustusburg hunting lodge , built from 1568 to 1572. Nowhere in Europe has an ideal geometric plan been implemented so consistently. The design of the original model could go back to August itself.

He completed the expansion of the Dresden Residenzschloss (1553–1556) that his brother Moritz had begun. Since his passion was hunting, he had numerous official castles prepared for his hunting stays. Not only did he use the Moritzburg hunting lodge built by his brother , but immediately after his accession to the throne in 1554–57, he had Nossen Castle expanded into a hunting seat by building a new west wing and the Grillenburg hunting lodge built in 1554–58 in order to be able to hunt the crickets ( in the sense of worries). In 1556 he acquired the large Wermsdorf Forest as a court hunting ground (which was used as such until 1918 and where the electoral hunting castles of Wermsdorf and Hubertusburg were built under his successors ). 1555–58 he had Schwarzenberg Castle expanded into a hunting seat, and in 1569 he built the Jägerhof (Dresden) . He had the old Gommern Castle demolished and rebuilt as a hunting lodge in 1578. From 1572 to 1575 he had Annaburg Castle, named after his wife, built for her as a widow's residence and hunting lodge. He also had Lichtenburg Castle built for his wife in place of an earlier monastery . He also initiated the expansion of Dippoldiswalde Castle and Freudenstein Castle as official castles. The planned large-scale renovation of Osterstein Castle (Zwickau) only came about after August's death from 1587 to 1590. Its most important architect was the master builder Hans Irmisch .

August was the third son of Duke Heinrich of Saxony (1473–1541) from his marriage to Katharina (1487–1561), daughter of Duke Magnus II of Mecklenburg . His older brother was the Saxon Elector Moritz, his sisters were Sibylle , Duchess of Saxony-Lauenburg since 1540 , Aemilia , Margravine of Brandenburg-Ansbach since 1533 , and Sidonie , his eldest sister, with whom he had a particularly close relationship throughout his life he supported her difficult marriage with Duke Erich II of Braunschweig . Another brother, Severinus , died as a child.

Princess Anna of Denmark as Electress of Saxony

In Torgau August married Anna (1532–1585), daughter of King Christian III on October 7, 1548 . from Denmark . Marriage - albeit politically arranged - was already considered harmonious and exemplary by contemporaries. The couple was separated only a few days during their 37-year marriage.

Commons : Augustus I, Elector of Saxony  - Collection of images, videos and audio files

Commons : Coins from August Duke of Saxony and Elector  - Collection of images, videos and audio files