This article covers the picture gallery in Dresden. 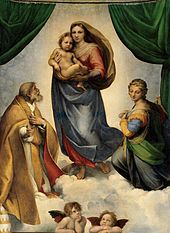 The Old Masters Picture Gallery in Dresden is one of about 700 exhibited masterpieces from the 15th to the 18th century's most renowned art collections in the world. The museum focuses on Italian Renaissance works as well as Dutch and Flemish painters of the 17th century. Outstanding paintings of old German and old Dutch paintings are also presented . The picture gallery is part of the Dresden State Art Collections . It is located in the Semper Gallery of the Zwinger . 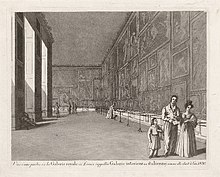 Interior view of the royal picture gallery in the former electoral stable building , 1830

The Sempergalerie am Zwinger - home of the picture gallery

When Elector August founded the Dresden Electoral Chamber of Art in 1560 , paintings played a subordinate role in this universal collection, alongside items from all possible areas of science. Systematic collecting began in the first half of the 18th century under the two Saxon electors who ruled between 1694 and 1763 , August the Strong and his son, Friedrich August II . After they had bought the 100 best works from the excellent collection of Duke Francesco III. von Modena had grown rapidly in 1746, the collection was initially moved to the stable building on Neumarkt in 1747, which had been converted into a picture gallery . This collection epoch was crowned in 1754 with the acquisition of Raphael's painting Sistine Madonna . The collection had meanwhile achieved European fame thanks to its valuable acquisitions. The Seven Years' War , which began now, ended the active expansion of the collection for many years.

Interior view - in the background the Sistine Madonna

Due to the need for a new museum building that meets the requirements of the 19th century, Gottfried Semper designed today's gallery building on the Zwinger , the so-called Semper Gallery . After Semper's escape in 1849, this "north-facing kennel closure" was completed in 1855 by Karl Moritz Haenel . The “New Royal Museum of Dresden” opened on September 25, 1855 in the “Sempergalerie”, where the picture gallery is still located. The purchasing activity also started again. In 1853, 16 Spanish paintings came to Dresden from the estate of the “citizen king” Louis-Philippe I. paintings by Italian and Dutch masters followed in the 1870s and 80s. In 1873 the state parliament decided to make significant sums available for the acquisition of works of art.

For reasons of space, it became necessary to outsource modern paintings at the beginning of the 20th century, which is how the New Masters Gallery began. During the Second World War , the paintings were outsourced. a. in the Lengefeld lime works , in the tunnel of the Rottwerndorfer sandstone works near Pirna and in the Cotta tunnel . Thus, despite the extensive destruction of the Sempergalerie by the air raids on Dresden , most of them were preserved. On February 13, 1945, 154 paintings were burned when the truck they were loaded onto was hit by a bomb. Another 42 paintings, all of them large formats, burned in the residential palace on the same day .

After the end of the war, the pictures came to the Soviet Union as looted art . In 1955 the Council of Ministers of the USSR decided to return it. On August 25, 1955, the Dresden paintings were handed over to a government delegation of the GDR in Moscow. On this subject, the German Post of the GDR issued several series of stamps with the title Paintings returned by the USSR in the Dresden Gemäldegalerie . On June 3, 1956, the Dresden Picture Gallery was reopened in part of the Semper Gallery, which was still being rebuilt. This was completed in 1960. In 1963 there were 206 destroyed and 507 missing paintings. About 450 paintings are still missing.

From 1988 the Sempergalerie was extensively reconstructed and reopened on December 5, 1992. After seven years of general renovation and the associated partial closure of the gallery, the Old Masters Picture Gallery was reopened on February 28, 2020.

Gallery café in the "German Hall".

Important masterpieces from the 15th to 18th centuries are the reason for the worldwide fame of the collection. The focus of the collection is on Italian painting, especially the High Renaissance and Baroque , as well as Dutch and Flemish painting, especially from the 17th century. Outstanding works by well-known German, French and Spanish painters are also represented. The collection of Spanish paintings , comprising 34 works, is considered the most important holdings in a German museum. In addition, panel and canvas paintings from the Italian Early Renaissance are shown. The picture gallery has the world's largest Cranach collection. Almost the entire inventory of works by Lucas Cranach the Elder and the Younger as well as works from their workshop are on display.

Since the reopening of the Sempergalerie on February 29, 2020, the collection has been presented in a redesigned form. The colors of the walls are used for structuring. The works of the Italians are exhibited on red walls, while the German and Dutch paintings hang in front of green wall coverings. Spanish and French pictures of the 17th century are presented on a blue background.

The permanent exhibition consists of around 700 paintings, which corresponds to around 40% of the depot stock. The relatively dense hanging of these pictures takes place in magnificent gold frames. By setting up the sculptures in the picture gallery, sculptures and paintings in the sense of the Paragone (“competition of the arts”) are contrasted. In addition, the ancient sculptures are shown in the Antikenhalle (east hall of the gallery). The Winckelmann Forum (formerly Gobelin Hall) opened on June 6th, 2020 with a special exhibition on Dresden tapestries based on boxes by Raphael (1483–1520).

The museum is visited over half a million times a year.