The Green Vault in Dresden is the historical museum collection of the former treasury of the Wettin princes from the Renaissance to Classicism . The name of the most extensive collection of treasures in Europe is derived from the column bases and capitals in the original vaulted rooms, which were once painted malachite green . The collection rooms of the Green Vault have been open to the public since 1724.

After Duke Moritz was appointed elector in 1547, he had a wing added to the west of his residential palace. Two rooms created in this way and a large hall with an adjoining tower room received magnificent ceilings, with the capitals painted in malachite green like the column bases . The latter gave these four rooms on the ground floor, officially called “Secret Storage” from the late 16th century, the common name Green Vault , which has been preserved to this day .

At that time, the vault was still used to safely store valuable objects and documents and not to display them to the public. Stone vaults were often chosen in castles of the time for the storage of valuables and documents, as they offered special protection against fire. This forward-looking decision enabled the treasures to be largely preserved to this day.

Expansion under August the Strong

Between 1723 and 1729, the Elector of Saxony and Polish King August the Strong set up a chamber of curiosities consisting of nine rooms , in which visitors could view the art objects and rarities that he and his dynastic predecessors had collected in a baroque architecture. In a first phase of construction, the precious hall and the corner cabinet in their present form were created by 1725 ; In 1727, August arranged for the original Green Vault to be expanded with wall openings by eight more vaults. The architecture of the treasure chambers was designed by Matthäus Daniel Pöppelmann , the architect of the Dresden Zwinger . The interior was created by Raymond Leplat .

The Green Vault remained largely unchanged until the 20th century. It can therefore claim to be one of the oldest museums in the world , following the museum complex that was specially built in 1572–1583 with the armories, the chamber of art and curiosities and the library of Archduke Ferdinand II at Ambras Castle Innsbruck .

The bombing of Dresden on February 13, 1945 largely destroyed three of the nine rooms. The art treasures had been relocated to the Königstein Fortress a few years earlier . At the end of the Second World War , they were transported to the Soviet Union, but returned to the GDR in 1958 by decision of the Soviet government .

From 1959 to the beginning of 2004, the Green Vault was temporarily visible in the Dresden Albertinum .

On September 7, 2004, the New Green Vault was reopened with ten rooms on the first floor of the west wing of the Residenzschloss.

On September 1, 2006, the restored or reconstructed Historic Green Vault on the ground floor of the west wing was reopened . Its establishment is based on the inventories that have been preserved from 1733 and, as far as possible, restores the condition under August the Strong. More than 3000 objects returned to their old place. The renovation of the historic wall cladding cost 13 million euros, and the state of Saxony spent 45 million euros on the Green Vault.

The historic part of the Green Vault was broken into on the early Monday morning of November 25, 2019 . Eleven objects, parts of two other pieces and diamond-studded skirt buttons were stolen from a showcase in the jewelery room. The “Saxon White” , a white diamond with 48 carats, was also lost.

The collection of the Saxon electors and kings includes over 4,000 works of art. The exhibits are unique in many ways in Europe and in the world. Due to the limited space, not all works of art can be shown, one is limited to the most famous and demanding exhibits.

In contrast to the New Green Vault, which can be visited at any time, access to the historic vault is only possible with a time ticket purchased in advance. A limited number of tickets is also sold every morning.

The historical green vault is located in the vaulted rooms of the castle, so that the late Baroque work of art can be experienced in the original rooms. In the midst of reconstructed Renaissance and Baroque halls, the approximately 3000 exhibits are presented as they were once free on the consoles of magnificent display walls and magnificent tables. 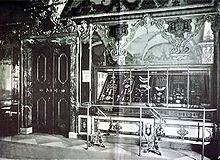 The historical green vault consists of nine exhibition rooms and a vault:

The “Mohr with emerald step” is one of the most famous exhibits of the court goldsmith Johann Melchior Dinglinger . The sculpture, which presents a Colombian emerald stage on a tray, was created in collaboration with Balthasar Permoser . The term emerald stage describes the earth plate on the tray in which the emeralds are still stuck. The piece is 63.8 cm high and is made of lacquered pear wood , which is set with emeralds , rubies , sapphires , topazes , garnets , almandines , tortoiseshell . It probably dates from the year 1724. The Moor, an African, is actually supposed to represent an Indian, recognizable by the Indian body jewelry. The sculpture was created at the request of August the Strong in order to give the emerald crystals from Colombia and given to his predecessor, Elector August , in 1581 a worthy means of presentation.

The "Obeliscus Augustalis" is another masterpiece of the court goldsmith, created between 1719 and 1721. It represents an elaborately crafted cartouche with an oval image of Augustus the Strong. 240 gems and cameos, cut stones and gold-enamelled figures became one space-defining work of art. The height is 228 cm. This man-high, wall-bound obelisk was about as expensive as the construction of a baroque palace.

The "Amber Cabinet" was a gift from Frederick II of Prussia to King August III. from Poland . It was made in Königsberg before 1742 . There are also other extensive amber works of art on display in the amber cabinet .

The “jewelery sets” formed, at least until the art theft on November 25, 2019, the most extensive jewel treasure in Europe. The earliest sets, which were also the subject of the break-in, were created for August the Strong himself. A large part of the sets were added later and the design was subject to the respective fashionable zeitgeist. There are six different styles, mainly according to the materials used. The gemstones used were: sapphires, carnelians, diamonds and rubies, as well as pearls. The sets were the epitome of an absolutist claim to power. In addition, a worldwide unique sapphire of 648 carats, which was a gift from Tsar Peter the Great . In the historic vaulted numerous, highly decorated drinking vessels are on display, including the Vorgewölbe mouth cup Martin Luther and a drinking bowl Ivan the Terrible .

In contrast to the Historic Green Vault, the New Green Vault is set up as a modern treasury museum in simple rooms without a historical ambience. In ten halls with curtained windows, the almost 1100 objects in the collection are shown under artificial light in 200 showcases. They are in chronological order on different colored display bases: Kunstkammer pieces on green bases, Renaissance exhibits on blue bases and Baroque pieces on red bases. In addition to the court sculptor Balthasar Permoser , there are mainly works of art by the court goldsmith Johann Melchior Dinglinger that are exhibited here.

The "cherry stone with 185 faces" was created before 1589, probably with the help of a magnifying glass . The carved core is worked into an elaborate ear jewelry. 113 faces can actually be recognized. It belongs to a group of four cherry stones from the 16th century, which also show Bible stories, portraits and coats of arms in the finest execution. They were given to Elector Christian I of Saxony in 1589 and can be seen together in the micro-cabinet today.

The “Golden Coffee Stuff” (original: Pretiosen Coffe Zeug) by Johann Melchior Dinglinger was created 1697–1701 and is Dinglinger's first major work as a court goldsmith under August the Strong . It is the epitome of a sumptuous coffee service in which 45 vessels have their place on a silver-gold-plated pyramid. The materials used are gold, silver, enamel, ivory and approx. 5600 diamonds. The cost here was 50,000 thalers. It cost more than the shell of Moritzburg Castle .

The “Court of Delhi on the birthday of the Grand Mogul Aurang-Zeb ”, recently also under the title “The Throne of the Grand Mogul Aureng-Zeb”, depicts the notion of European monarchs of the pomp of the Mughal palaces by holding a festival at the court of the Indian Grand Mogul Aureng -Zeb, a contemporary of August the Strong, shows. Neither August nor his court goldsmith had ever been to India, so the work of art was made by Johann Melchior Dinglinger, his brothers Georg Friedrich Dinglinger as an enameller and Georg Christoph Dinglinger as a jeweler, as well as twelve other assistants, exclusively based on travel reports. The result is an extremely elaborate and detailed miniature representation in the form of a table top with 137 people and additional animals, decorated with 5223 diamonds, 189 rubies, 175 emeralds, a sapphire and 53 pearls. The work was created between 1701 and 1708, it is 58 cm high, 142 cm wide and 114 cm deep. The cost was 58,485 Reichstaler, which corresponds to the annual salary of 1000 civil servants.

“The bath of Diana ” depicts the Roman goddess of the hunt on a decorative bowl. Two dolphins spew water into the bowl, on the edge of which there are toilet utensils. Opposite Diana, who is ready to swim, one of her dogs is guarding her hunting equipment. This idyllic scene is juxtaposed with the tragic outcome of Ovid's saga of Diana and Actaeon on the foot and shaft. The hunter Aktaeon caught a glimpse of the shy goddess while bathing, whereupon she turned him into a deer as punishment, which was torn apart by his own dogs. The shaft consists of an enamelled deer head, the golden antlers of which the bowl bears, and two enamelled dogs. The head of the transformed Actaeon, over which the dogs greedily attack, lies on the base of the bowl, designed as a forest floor. - The work created by Dinglinger was created around 1705, the height is 38 cm. The decorative bowl made of chalcedony is covered in gold, additionally set with pearls, diamonds, enamel pictures, silver and steel ornaments, implements and animals. The inscription on the base of the bowl reads: "DISCRETION SERT EFFRONTERIE PERD" (tact and decency adorns, shamelessness loses).

At 41 carats, the “ Dresden Green Diamond ” is one of the largest diamonds in the world. It was found in India and owes its unique color to natural radioactivity . August III , the son of August the Strong, bought it at the Easter fair in Leipzig in 1742 for the enormous amount of 400,000 thalers, although the price is not guaranteed. His way from India to Europe is unclear; he was first mentioned in London in 1722. The "Dresden Green Diamond" has been part of an extremely valuable hat ornament since 1768, in which two further large diamonds of 6.3 and 19.3 carats as well as 411 medium-sized and small diamonds are incorporated.

"In the Green Vault I saw that the elector is a very rich man."

“The eye never looks enough:
says Solomon in his Proverbs.
Oh, that he has
not seen Dresden ! "