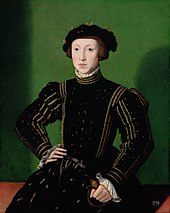 Ferdinand of Austria (as a member of the ruling family he had the title of Archduke from birth) was the second son of Emperor Ferdinand I and brother of the Roman-German Emperor Maximilian II. Ferdinand was an educated and art-minded person who was fluent in several foreign languages. In later years he was extremely popular and known as a man of balance.

In 1547 his father made him head of the administration of the Kingdom of Bohemia and resided as governor in Prague for 20 years. In 1556 he led a campaign against the Turks in Hungary. As permanent representative of the king, he ensured that the rights of the Bohemian estates were restricted and that tax revenues were increased in order to pay off the Habsburgs' debts to the Fuggers from the Schmalkaldic War .

From 1557 he was secretly married to Philippine Welser (1527–1580), the daughter of a patrician from Augsburg , who bore him several children. The marriage was approved by Emperor Ferdinand I in 1561 on condition of secrecy; only in 1576 confirmed Pope Gregory XIII. the marriage related to the appointment of the Philippines and Ferdinand's son Andreas as cardinal and released the couple from their vows of secrecy. The children were given the name “von Österreich”, but should only be capable of succession in the event that the entire male House of Habsburg died out (see Morganatic marriage ).

After the death of his father, Emperor Ferdinand I, in 1564, Ferdinand II received rule over Tyrol and the foreland ( Vorarlberg , Breisgau , Burgau and others) according to his father's will . At Maximilian II's request, he remained in Prague as the Bohemian governor until 1567 .

During the lifetime of his first, ailing wife Philippine, in 1573 he had asked for the hand of his seven-year-old niece Anna Caterina von Gonzaga , a daughter of Duke Wilhelm of Mantua and Eleanor of Austria . The relevant documents for this dynastic project are in an archive in Mantua.

After the death of his first wife Philippine in 1580, he married his niece Anna Caterina Gonzaga on May 1, 1582 in Mantua. At this point, however, this was no longer his first choice, before he had courted the Swedish Princess Cäcilia , the widow of the Baden margrave Christoph , in vain. Then he wanted to marry Maximiliana, a daughter of his sister Anna . His sister refused, however, because his moral excesses were known far beyond the borders of Tyrol.

Finally he went to Italy again, where the father of the now sixteen-year-old Anna Caterina demanded, among other things, the award of the title Altezza for the Gonzaga house . The papal dispensation due to close relatives was no problem .

Archduke Ferdinand died on January 24th, 1595. Because of the negotiated succession, his sons of the first marriage and his daughters of the second marriage were not entitled to inheritance, and so Tyrol returned to the other two Habsburg lines after his death.

In 1573, Ferdinand emerged legislatively with the enactment of a new Tyrolean provincial order , which primarily regulated criminal and procedural matters and was also published in 1603.

In the countries he ruled, Ferdinand helped the Catholic Counter-Reformation to break through.

Ferdinand II's greatest importance lies primarily in the history of art. As a humanistically educated art lover, he laid the basis for the famous Ambras collection during his time as governor of Bohemia . This important collection of armor , art and curiosity , portrait gallery and library were of great value; and the Archduke was indebted for it too. His collection was considered to be one of the most important collections of its kind , along with those of Emperor Rudolf II or Elector August von Sachsen . Jakob Schrenck von Notzing (1539–1612), a relative of Philippine Welser, was his private secretary and historical collaborator in charge of the armaments collection also published the book Armamentarium Heroicum or Ambraßische Heldenkammer . Ferdinand II's collections are now predominantly part of the Kunsthistorisches Museum and are located at Ambras Castle in Innsbruck (armories, art and curiosities, collection of Gothic sculptures, Habsburg portrait gallery) as well as in Vienna in the Haus am Ring (art chamber, picture gallery, coin cabinet) and the Neuen Burg (court hunting and armory, Vienna World Museum, collection of old musical instruments) can be seen. Other parts ended up in the Austrian National Library or the MAK - Museum of Applied Arts .

In terms of art history, Ferdinand II can be considered the founder of the systematic collection system. Its museum, built especially for its collections (Lower Castle of Ambras Castle), is the only surviving Renaissance museum building in which parts of the collection have been preserved at their original destination and are still on display: Ambras Castle Innsbruck is the oldest museum in this regard of the world. In addition, its chamber of art and curiosities is the only art chamber of the Renaissance still preserved on site. Ferdinand II is of particular cultural and historical importance as the organizer of large representative tournaments and court festivals. Last but not least, he was the first prince of the Renaissance to afford the expensive luxury of his own court glassworks. The manuscript collection of his library was included in the UNESCO World Heritage Site in 2018.