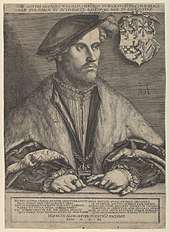 William V , called William the Rich (* 28. July 1516 in Dusseldorf , † 5. January 1592 ibid, buried in the Collegiate Church of St. Lambertus to Dusseldorf), was from 1539 until his death Duke of Jülich-Cleves-Berg and Count of Mark and Ravensberg . 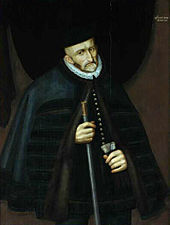 Wilhelm V in Spanish court costume , at the age of 75, portrait by Johan Malthain , 1591

Wilhelm was the only son of Johann III. , Duke of Jülich-Kleve-Berg, Count of Mark and Ravensberg and Maria von Jülich-Berg . After the death of his father in early February 1539, he took over the rule.

As early as 1538, Duke Wilhelm came to rule the neighboring Duchy of Geldern as the successor to the distant relative Duke Karl von Egmond . However, Emperor Charles V claimed this land for himself and got right at the Regensburg Reichstag in 1541.

Wilhelm tried to counteract and in 1540 gave his sister Anna von Kleve to the English King Henry VIII as wife. However, this marriage was not consummated and was annulled six months later. In the same year Wilhelm married Jeanne d'Albret , the niece of the French King Francis I , for reasons of power politics, probably with the support of his cousin François I de Clèves . He also speculated on the support of his brother-in-law, Johann Friedrich I , Elector of Saxony, a leader of the Schmalkaldic League , who had married his eldest sister Sibylle in 1527 .

The conflict between Franz I and Wilhelm V on the one hand and the Emperor and Maria of Hungary , the governor of the Spanish Netherlands, on the other came to a head in the Third War of the Geldr Succession in 1542 . On July 16, 1542, Marshal Duke Wilhelm V, Maarten van Rossum , invaded the imperial Netherlands. He did so as an ally of the King of France. He had declared war on Charles V on July 12, 1542. Mary of Hungary began a counter-offensive on October 1, 1542. On Easter Sunday in 1543 she was defeated by the troops of the United Duchies in the Battle of Sittard . In spite of the victory that his army had won in the battle of Sittard over the Habsburg troops of the Spanish Netherlands , Duke Wilhelm finally had to surrender because the French help he had hoped for did not materialize during the battles. He had to accept the Venlo Treaty of September 7th and cede the Duchy of Geldern including the County of Zutphen . The marriage not consummated with Jeanne d'Albret was annulled in 1545. When he married Maria von Habsburg , a niece of Charles V, Wilhelm V sought a closer connection to the House of Habsburg in 1546 .

Despite this connection, Wilhelm remained loyal to a line mediating between the Christian faith parties on the basis of the humanism of an Erasmus of Rotterdam , which offered protection to a number of brilliant humanists of his time at his court and in his sphere of influence, such as the theologian and lawyer Konrad Heresbach , the Erasmus -Intimate Johann von Vlatten , the doctors Johann Weyer , Wilhelm's personal physician, who became famous above all as the first fighter of the witch madness, and Reiner Solenander , the cartographer Gerhard Mercator and the humanist and pedagogue Stephanus Winandus Pighius . Weyer honors Wilhelm as an opponent of the witch hunt . With regard to Jews , Wilhelm issued a stricter police ordinance in 1554, which required their expulsion. It is considered an expression of anti-Judaism at the time .

In order to rebuild or embellish several fortresses and residences in his remaining countries, he engaged the Renaissance master builder Alessandro Pasqualini . He oversaw the expansion of the residential and fortress cities of Jülich and Düsseldorf, the expansion of the Klevian Orsoy and the Ravensberg Sparrenburg into a fortress. Due to the troubled situation in the Netherlands, Wilhelm stayed most of the time in Düsseldorf Castle . The description of the princely Jülich wedding in 1585 by the court lawyer and Bergische Landschreiber Dietrich Graminäus , on the occasion of the marriage of the duke's son Johann Wilhelm to the margravine Jakobe von Baden, gives an impression of the magnificence of the Düsseldorf court : under the musical direction of the court composer Martin Peudargent , mythological spectacles took place on the Rhine, fireworks, dance, jousting and with Orpheus and Amphion the first demonstrable operatic performance in Germany .

Due to several strokes, Wilhelm was partially paralyzed after the tragic death of his son and designated successor Karl Friedrich , who had succumbed to the Blattern in Rome in 1575 , was forced to continue the business of government despite increasing frailty, since he was now in Karl Friedrich's place passing Johann Wilhelm in turn was of feeble constitution and unstable mental condition and beyond inclined to Catholicism.

When William died in early 1592, he left a between the insurgent Netherlands and Habsburg , between Protestantism and Catholicism grated country due to increasing government inability sank his son Johann Wilhelm in chaos and intrigue economy. Although Wilhelm died in January, the funeral did not take place until two months later (on March 10, 1592). The Mannerist grave monument , which commemorates him in the Lambertus Church in Düsseldorf , was only commissioned after his death.

Wilhelm married on June 14, 1541 Jeanne d'Albret , daughter of King Henry II of Navarre , niece of the French King Franz I.
The marriage was never consummated and on October 22, 1545 by Pope Paul III. canceled.