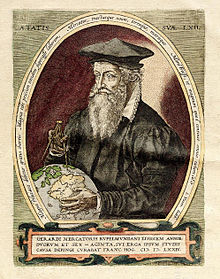 Play media file
Short film about Mercator as a cartographer

Gerhard Mercator (* March 5, 1512 in Rupelmonde , County of Flanders ; † December 2, 1594 in Duisburg , United Duchies of Jülich-Kleve-Berg ) was a geographer and cartographer who was already regarded as the Ptolemy of his time during his lifetime the Arab-Islamic world was famous. His real name was Gheert Cremer (Latinized Gerardus Mercator ("businessman"), German also Gerhard Krämer ).

Known today primarily as a cartographer and globe maker , Mercator was also of great importance as a cosmographer , theologian and philosopher in the 16th century and set standards as a type artist.

Years of life in Flanders 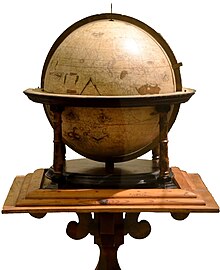 Earth globe, signed by Mercator with the date 1541; is now in the Palazzo Ducale in Urbania and is said to be one of 22 existing globes 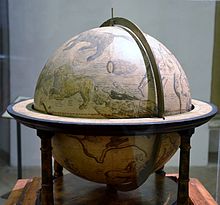 Mercator was born as the seventh child of Hubert Cremer and his wife Emerentia in Rupelmonde, southwest of Antwerp. Up to the age of six he spent his childhood in Gangelt , 120 km away , where his father was a shoemaker. In 1518 the family moved entirely to Rupelmonde and after the death of his father in 1526 Gerhard was brought up by the brothers from their common life in Herzogenbusch with the support of his uncle Gisbert, who was a clergyman in Rupelmonde . Among other things, Georgius Macropedius was his teacher here.

From 1530 Gerhard studied at the University of Leuven under Gemma Frisius , received his master's degree in 1532 and then pursued private studies in theology, philosophy and mathematics, especially in their practical applications (maps, globes and instruments). From 1534 to 1537 Mercator was involved in the creation of Gemma Frisius' earth and celestial globes as an employee .

In 1536 he married Barbara Schellekens, who gave birth to their first son Arnold in 1537 . In 1537 he created the first map Amplissima Terrae Sanctae descriptio ad utriusque Testamenti intelligentiam . In 1538 he created his first world map. In the same year his first daughter was born, who was christened Emerance after Mercator's mother. In 1539 the second daughter Dorothéa followed.

Also in 1539, Mercator published a map of Flanders, which attracted the king's attention. In 1541 Mercator brought out his first globe, which was sold in large numbers over decades. In the years 1540 and 1541, the two sons Bartholomäus (1540–1568) and Rumold were born. In 1542 the daughter Katharina followed as the sixth and last child.

It is questionable whether Mercator obtained a theological doctorate. In 1544 he was arrested for "Lutherey" (as a supporter of Martin Luther's Reformation ) and imprisoned for many months. During this time, Philipp Melanchthon's main scientific work, Initia Doctrinae Physicae (1549), was published, which is likely to have had a great influence on Mercator. The correspondence with Melanchthon, discovered only recently, has not yet been evaluated.

In 1551 Mercator made the celestial globe complementary to his globe from 1541 for the first time. From then on these globes were mostly sold in pairs, of which at least 22 still exist. 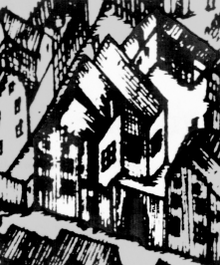 In 1551 Wilhelm the Rich invited him to become professor of cosmography at the University of Duisburg, which was to be newly founded . Mercator accepted the offer and in 1552 moved to Duisburg, where he lived in a house on Oberstrasse; whether reasons of belief played a decisive role is controversial. In any case, he lived safe from hostility in the city in the Duchy of Cleves , which was characterized by religious tolerance .

From 1559 to 1562 he worked as a teacher of mathematics and cosmography at the newly founded Duisburg Academic Gymnasium , today's Landfermann Gymnasium . A student of Mercator from 1562 was Johannes Corputius , who in 1566 produced the extraordinarily exact cityscape of Duisburg named after him, the Corputius plan . The university was never founded during Mercator's lifetime, although the duke had received papal permission in 1564 and the imperial privilege to establish it in 1566.

Mercator achieved world fame with his large world map from 1569 (Nova et aucta orbis terrae descriptio ad usum navigantium) . Possibly inspired by Erhard Etzlaub , he developed a projection that is still important for seafaring (and aviation) because of its angular accuracy, which became known as the “ Mercator projection ”. According to John Vermeulen , Mercator worked with his contemporary Abraham Ortelius .

In the 1570s, Mercator published theological writings, most of which were unknown, or at least ignored, until recently. He dealt with the theology of the Swiss Reformed. He is also likely to have been inspired by the so-called "Christian physics" of Lambertus Danaeus , a pupil of Calvin .

At about the same time as the world map, Mercator's theologically shaped world history Chronologia appeared. Hoc est temporum demonstratio exactissima, ab initio mundi usque ad annum Domini MDLXVIII (1568). Further cartographic work was followed in 1590 by the commentary on the Letter to the Romans, which so far is only available as a manuscript in Leiden , in which he worked out the theological-systematic basis for his cosmography. The Chronologia was listed as a forbidden book by the Catholic Church in the appendix to the Council of Trent in 1563 . 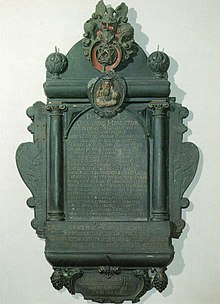 Epitaph in the Sankt-Salvator-Kirche Duisburg

Shortly before his death, Mercator completed the main work, the cosmography Atlas, sive Cosmographicae Meditationes de Fabrica Mundi et fabricati figura , which was published posthumously in 1595 by Mercator's son Rumold. So far, it has mainly been the cards that have been noted, occasionally they even appeared without the text. Particularly noteworthy is the christological orientation, which fundamentally differs from medieval cosmographies up to Sebastian Münster .

The atlas was also added to the index by decree of the Roman Catholic Congregation for the Doctrine of the Faith of August 7, 1603 .

Mercator died in 1594 a respected and wealthy man. His grave in the Salvatorkirche in Duisburg is lost, only his magnificent epitaph is still there.

Mercator saw himself more as a scientific cosmographer than someone who had to make a living making and selling maps. His production was quite extensive: we know twelve pairs of globes (heaven and earth), five wall maps, many maps of regions, world maps as well as a chronology (with Gospel harmony ) and cosmography. Many of his works are now exhibited in the treasury of the Duisburg City Museum of Culture and City History . 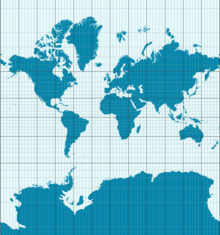 We only know four wall maps from the Duisburg period:

This last card can rightly be called Mercator's masterpiece. It is the first world map to use a conformal projection ( Mercator projection ).

After the world map was published, Mercator shifted more and more to the production of a cosmography. Mercator had big plans: a huge cosmographic work about creation, its origin and its history.

He wrote the first ideas for this in 1569 in the introduction to his Chronologia . The cosmography would consist of five parts:

Mercator's scientific attitude became his fate. Again and again he postponed the publication of his work in the hope of new information. The cartographic part of his cosmography was therefore only partially completed.

First his Ptolemy edition of 1578 was made. Mercator saw this edition merely as a representation of the world according to the ideas of the classical authors. The 28 Ptolemaic maps have never been included in any other atlas, while they were reissued in 1730. 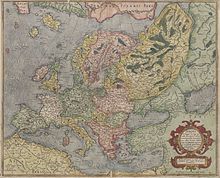 It wasn't until 1585, fifteen years after the Theatrum was issued , that Mercator came up with an unfinished edition of his 'Modern Geography'.

The map book contains 51 maps: 16 from France , nine from the Netherlands and 26 from Germany . He had the most reliable descriptions of these countries. Each part has its own title page : Galliae Tabulae Geographicae , Belgii Inferioris Geographicae Tabulae and Germaniae tabulae geographicae . The whole thing still had no title.

In 1589 22 maps of Southeastern Europe , Italiae, Sclavoniae et Graeciae tabulae geographicae followed . Unfortunately, Mercator did not have the opportunity to expand his Tabulae Geographicae into a real world atlas with a scope of around 120 maps according to his original planning .

A year after his death, his son Rumold Mercator issued a 34-card supplement. It contains 29 maps of the missing parts of Europe ( Iceland , the British Isles and the Northern and Eastern European countries) engraved by Gerhard Mercator . 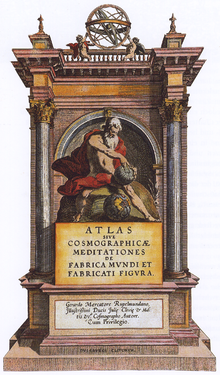 Title copper for the atlas of Gerhard Mercator, which was published one year after his death by his son Rumold Mercator

Rumold's “complete edition” has its own title page and foreword. The title is Atlas sive Cosmographicae Meditationes de Fabrica Mundi et Fabricati Figura (Atlas or cosmographic meditations on the creation of the world and the form of creation).

Mercator explained the choice of the title Atlas in an introduction. According to this, the name is derived from the mythical king and first astrologer Atlas of Mauritania , which, according to Mercator's description and the accompanying family table, was the atlas of Greek mythology. Mercator refers to the stories in Diodorus .

“So it is my destiny to imitate this atlas, a man as outstanding in literacy, humanity and wisdom as to look at cosmography from a high watchtower, as far as my strength and ability allow, to see whether I possibly through my diligence I can find some truths in as yet unknown things, which could serve the study of wisdom. "

Atlas is depicted on the title copper of Mercator's Atlas with a celestial and an earth globe.

The work begins with a biography of Gerardus Mercator, written by the Duisburg councilor Walter Ghim, followed by the atlas mythology. The first part is Mercator's work on the creation of Mundi Creatione et Fabrica Liber . The 107 cards form the second part.

It is characteristic of his understanding as a scientist of the Renaissance that the clarity of his thinking was permeated by high demands on the aesthetics of the representation. In the history of font development, Mercator also occupies an important place as a master scribe .

In 1540 he brought out instructions for writing the Italian italics : Literarum latinarum, quas Italicas, cursoriasque vocant scribendarum ratio . He was not only one of the first typeface artists north of the Alps to popularize this space-saving and clear Latin font over the Gothic script as part of a scribbler book, but he was also the first to use this cursive for writing on the cards.

His instructions (52 pages) were initially cut in wood and were reprinted in the same year and in 1549, 1550, 1556 and 1557. With the later application of the copper engraving , the elegant design of this font could come into its own. Mercator thus set aesthetic standards for the lettering of the cards and thus shaped the card style for the following two hundred years. 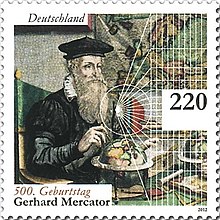 Numerous globes in Duisburg are reminiscent of Gerhard Mercator. This one is at the southern entrance to the city in Huckingen . 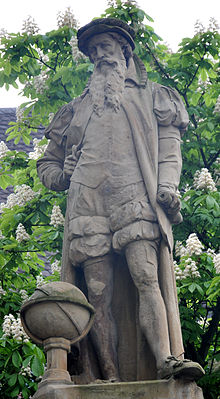 Statue at the Mercator Fountain , Burgplatz in Duisburg , created in 1878 by Anton Josef Reiss

Furthermore, the Duisburg Mercator-Gymnasium , a Berlin elementary school, an event and congress center ( Mercatorhalle ), a shopping center in Duisburg- Meiderich and a vocational college in Moers are named after him, as well as the southern Ringstrasse Mercatorstrasse / Kremerstrasse in downtown Duisburg and a Duisburg Excursion boat. In the Mercator barracks in Euskirchen , among other things, the Office for Geoinformation of the Bundeswehr is stationed.

The Mercator-Gesellschaft Duisburg, an association for history and local history, has also existed since 1950.

The Mercator plaque for special merits, particularly in the scientific or artistic field, is awarded by the city of Duisburg at irregular intervals. So far, sponsors have been, for example, the founding rectors of Duisburg University, as well as heads of culture and general music directors, but also the actor Hans Caninenberg and the painter Heinz Trökes .

There is also the Mercator Foundation founded by a family of entrepreneurs from Duisburg . It is one of the large foundations in Germany and promotes particularly in the areas of integration, climate change and cultural education.

A memorial was also erected in his honor in Gangelt, where Mercator grew up from 1512 to 1518. The so-called Mercator point is located at the confluence point of the 6th degree of longitude and the 51st degree of latitude, on the northern edge of the main town of Gangelt.